Alabama didn’t win a national title in 2013, but it did excel at flipping field position. Cody Mandell was the Crimson Tide’s unsung hero. He finished second in the Southeastern Conference, averaging 47.1 yards per punt. 23 of Mandell’s 39 punts pinned opponents inside the 20-yard line. Not bad for a former walk-on, but Mandell never hoisted a Ray Guy Award. True freshman JK Scott has an opportunity to win it this season.

Hailing from Denver, Colo., JK Scott was one of the top-rated punters nationally. Scott attended Mullen High School and became a household name on special teams, despite a three-star rating. He made 14 of 25 (56 percent) field goals and missed one extra-point (23 of 24) in his career. Scott averaged 43.8 yards per punt as a senior and totaled 43 touchbacks on kickoffs. He was rated as the No.1 punter nationally by Chris Sailer, one of the top private kicking coaches in the nation. ESPN ranked Scott fifth nationally in kicking.

From Colorado to Alabama—Playing under the Lights

“A child shall lead us.” Biblical principles are valued, but how many really believed that Scott would have this much of an impact on the team? He entered Alabama as one of 27 commits on National Signing Day. The Crimson Tide was set on defense. Offensively, Alabama was putting pieces in place. It was hoping for an average season from Scott, instead Alabama has received a display of excellent special teams from its freshman.

Scott has punted 43 times, averaging 46.8 yards per punt. 16 of his 43 punts have gone for 50+ yards. He has pinned opponents inside the 20-yard line 23 times, good for a 53.5 percent rating. Scott’s secret is hang time. He hasn’t given opponents a chance to return his kicks. Scott angles the ball toward the sidelines. This gives Alabama’s punt coverage an opportunity to make secure tackles or down the ball inside the 20.

Injuries plagued Alabama in its 23-17 loss to Ole Miss, but field position hurt Mississippi for much of the contest. JK Scott totaled six punts, averaging 51.8 yards. He pinned the Rebels inside the 20 three times. The Crimson Tide fell short on its final drive, but Scott kept them in the game with his performance.

He played well against Ole Miss, but Scott was Alabama’s most valuable player against Arkansas. Weather conditions were horrible in Fayetteville. Alabama’s offense was even worse. The Crimson Tide couldn’t establish a run game, and quarterback Blake Sims battled nerves. Scott was clutch, averaging 44.2 yards per punt. He pinned the Razorbacks inside the 20 seven times. Alabama’s defense fed off Scott’s play and held Arkansas to 89 yards rushing. The Crimson Tide won 14-13. Alabama’s coaching staff named Scott to its players of the week list on special teams.

Alabama’s matchup against Tennessee wasn’t in doubt, but Scott averaged 42.8 yards per punt. He dropped three kicks inside the 20 and helped Alabama defeat the Volunteers 34-20.

Alabama’s defense set a tone against Mississippi State, but Scott created its first scoring opportunity. His second punt of the game went for 34 yards. It was downed inside the 5-yard line. Mississippi State wanted to run the ball with Josh Robinson, but Geno Smith forced him outside. Linebacker Trey DePriest tackled Robinson in the endzone, forcing a safety for Alabama. Mississippi State’s average starting field position was its own 15-yard line. Scott averaged 45.6 yards per punt, totaling five kicks inside the 20. Alabama defeated Mississippi State 25-20.

JK Scott has been one of Alabama’s consistent factors on special teams. Alabama and the SEC as a whole have named him to player of the week honors. NCAA.com has Scott second nationally in punting average, behind Idaho’s Austin Rehkow (47.8). CBS Sports has Scott sixth in the nation.

P.J. Fitzgerald and Cody Mandell both excelled as seniors, but Scott could be Alabama’s first freshman punter to win a Ray Guy Award. Scott was named a semifinalist for this prize after his performance against Mississippi State. Two games remain for the Crimson Tide. Its dream of winning an SEC title is alive. Scott can lock up an award with solid games against Western Carolina and Auburn. He has won over the admiration of his teammates, including senior offensive lineman Ryan Kelly.

“He [Scott] is obviously one of the unsung heroes on this team,” Alabama’s center Ryan Kelly said on Scott after a win against Mississippi State.

Alabama’s head coach Nick Saban still hasn’t released the extent of place kicker Adam Griffith’s injury. JK Scott could see some kicking duties Saturday against Western Carolina. He’s averaged 62.0 yards per kick and has one touchback. Scott has attempted and made one extra-point this season. 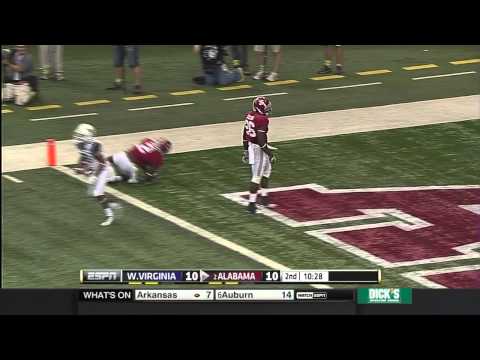