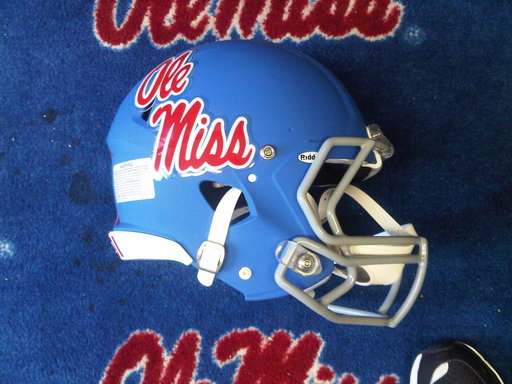 It hasn’t been seen in Tuscaloosa for 27 years, but tonight the powder blue helmet returns.

Powder Blue Helmets and Bricks, 27 Years Ago at Ole Miss vs Bama

It was 27 years ago, a long time in football years. None of the current players were even alive at that time. But it’s been 27 years since Ole Miss has beaten Alabama at home and it was a night not long to be forgotten.

The loss came on a clear cool night when the Rebels decided to wear a powder blue helmet and the loss caused an angry fan to throw a brick through the window of the Alabama coach’s home.

Yes, that was 27 years ago. You can relive that game by clicking HERE.

Bill Curry was the coach at the time and maybe it was his signal that his welcome was coming to an end in Tuscaloosa. Alabama fans just don’t take well to teams that have such a lopsided losing streak against you finally end it. Especially on homecoming night, especially when you were supposed to win yet again.

Despite the Rebels rich tradition and history, they’ve only managed to beat Alabama nine times in their entire history. They may have won more, but there wasn’t more Manning’s to go around. That family seemed to be a thorn in the side of the Crimson Tide for sure.

There has never been a time when Ole Miss has beaten Alabama in back to back years. Never, nada, zero. But Alabama has won back to back games so many times we just lost count. The official series is 54-9-2 on the field.

But for the few times the Rebels did manage a win, no win had so many strange things behind it or had such repercussions as that win 27 years ago. And tonight, the Rebels come back to town and to remind us all of that night so long ago, they bring their powder blue helmets back to inspire the boys to make a little history for themselves tonight.

If they do, it will be the first time in series history that the Rebels go back to back with wins against the Tide. It will thrust them back into the conversation for national titles and make the powder blue helmet a treasured icon for all time in Rebel history.

But that all remains to be seen. But at least if the Tide loses this year, you can rest assured that no brick will fly through his window.

No matter what, Nick Saban’s windows are safe.