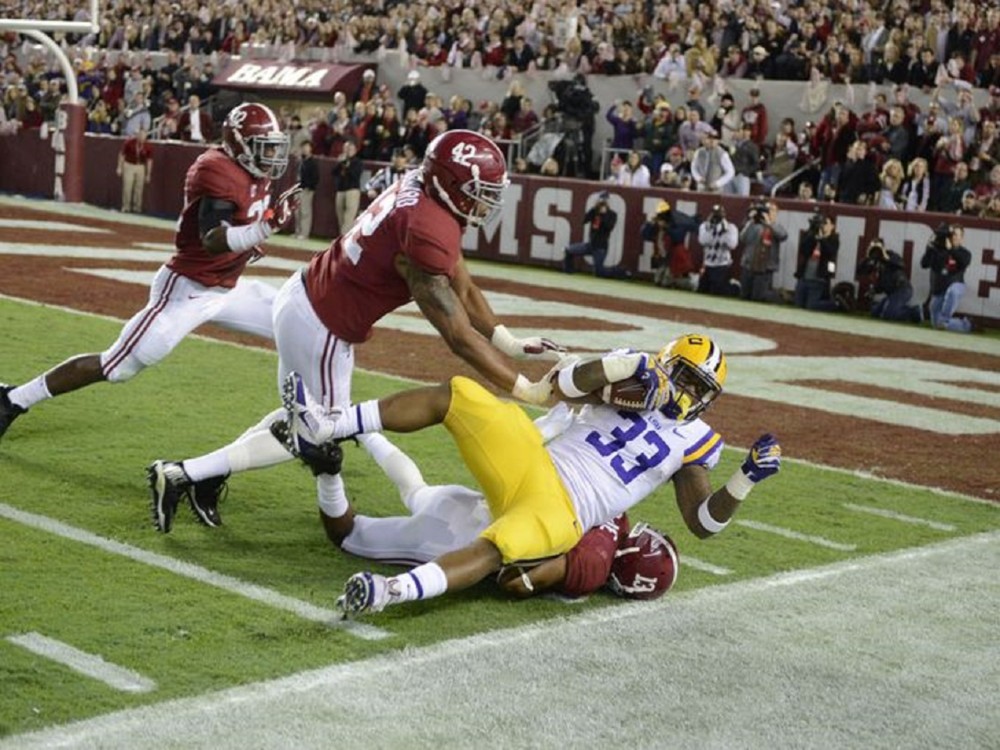 Expect a lot of running early on and then Alabama to start opening it up. (Photo John David Mercer USA Today)

What To Expect in the Alabama / LSU Game

The Alabama / LSU game has a solid history now with these two coaches. They build similar teams, recruit similar type players and run similar defenses and for the most part, somewhat similar offenses. They are also similarly conservative when they play one another.

Sure either coach may try the occasional trick play, but by in large each coach will start the game slowly with the running game with a few play action passes and screens to see two things.

The first thing they’re wanting to see is if the quarterbacks seem settled and in control and the second is seeing if the defense could be beaten up a little with the running game. Often times this is a game of waiting for the other to make the first mistake.

There is little reason to expect this game to start off any differently. Both coaches have been somewhat criticized for playing this game with their cards so close to their chest wanting to show so little.

This will start as a game of field position and probing. Each team will send their feature running back into the line to see what they can expect as the game goes on. Each will try a play action medium to short pass to gauge their quarterback’s ability on that night. Kiffin may even try and catch them napping and go for at least one early home run ball.

Kevin Steele, LSU’s defensive coordinator, knows Alabama like the back of his hand and will devise a gameplan to be run stop first defense. He knows if Alabama has success running the ball that they will dictate the pace of the game and eventually come out on top. He believes that his best shot to stop Alabama is to make Alabama’s quarterback, Jacob Coker, beat them with his arm.

He is going to employ a harassing rushing scheme that may hopefully frustrate Coker into adding to his seven interception total. Again, this will only work if they can stop the run and that could be a tall order.

On the other side of the ball, Alabama’s defensive coordinator Kirby Smart knows he has a solid defense that can bottle up Fournette perhaps better than anyone else has been able to do. Alabama did a solid job of keeping Georgia from establishing any rhythm on offense with the running game with a very similar top notch running back and maybe a slightly better offensive line. Georgia’s Chubb was kept in check the whole game except for one long run that ended up being too little too late. Smart thinks he can duplicate that exercise once again against LSU.

Now the battle will be to stop LSU from gaining ground in the passing game. Smart will go back to Saban’s “contain and effect” rushing scheme and less on going the bull rush sack route. They will contain Harris to the pocket, try and keep him from making plays with his feet and effect his throwing and hopefully move him into the interception column for his first time.

Both offenses will try to establish the run, both may try to mix in an end around and both will try some play action in usual running plays and screens. Alabama will be more likely to take the first and most deep shots in the first half. Les Miles will continue to be conservative in the first half but may go for it on fourth down if he’s inside the opponents 40 yard line if it’s fourth and short. He thinks this is a great way to capture momentum and get his team going. He may also fake a field goal in those circumstances.

Kiffin will try and be a little more unpredictable and he may use second and short opportunities to try something deep if the coverage is set up for run stop and the outside men are in one on one coverage. Plus with the spring back in Kenyan Drake’s step, look for him to be lined up at slot to try and gain a favorable matchup.

This game could be a typical low scoring defensive struggle, but Kiffin knows if he can jump on LSU early and cause a little panic, it could turn into a rout. While the game progresses, look for Kiffin to become more daring. If Coker seems settled that is.

The second half will be either be more of the same if the game is close or an LSU nightmare if Alabama is able to score points on offense and throttle the Fournette ground game. The only three scenarios that seem possible are:

But then if I knew everything, I’d be rich by now.