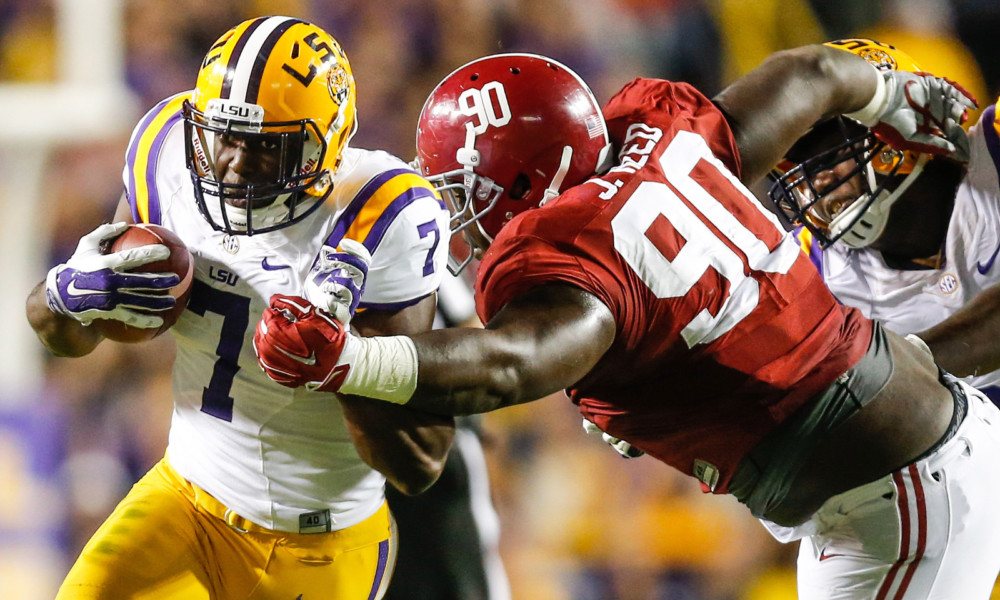 Leonard Fournette has been the star of the college football season so far this year. The sophomore running back is averaging more than 200 yards of total offense per game. And that’s ridiculous. He is on the top of every Heisman list you can find and for good reason. He is getting 26 touches per game and has scored 15 total touchdowns. I mean he is doing terribly mean things to SEC defenders.

So Leonard Fournette is the best running back in the game right now. The Alabama rush defense could be the best in the country. That is why this is the biggest story going into the biggest game of the year.

As a team, the Tigers have rushed for 309 yards and three touchdowns per game. They are averaging six yards per rush. Teams know that LSU’s gameplan is to run the ball and yet they still can’t be stopped. Fournette has very capable backups in Derrius Guice and Darrel Williams. The two running backs have combined for 599 total yards and five touchdowns this season. Quarterback Brandon Harris has even added three rushing touchdowns so far this season.

However, Fournette and the Tigers have not faced a defensive front like the Crimson Tide’s. LSU faced the nation’s 15th best rushing defense in their home game against Florida. The team had a season low 221 rushing yards but Leonard Fournette went for 180 of them. The next best rushing defense that the Tigers have faced this season is Syracuse, who ranks 55th in the country.

A major factor in the LSU running game will be the return of fullback John David Moore. Fournette’s lead blocker has been out for three weeks and could be the difference in a three yard gain and a seven yard gain.

The LSU offensive line is led by center Ethan Pocic. The junior could be the best center in the conference and has already been honored twice as the offensive linemen of the week in the SEC. He was named to the midseason All-America team by ESPN. Vadal Alexander, the Tigers’ right tackle, will be another key to the rushing attack.

Alabama’s front seven is tired of hearing about the big time running back though. They are ready to play the game and hope to put a stop to Fournette’s run. Alabama has allowed just 83 rushing yards per game, which is good for third in the country. Opponents have allowed just 2.6 yards per carry so far this season.

The Crimson Tide is led up front by A’Shawn Robinson. The junior defensive tackle has 26 total tackles including 2.5 for a loss and a fumble recovery. Reggie Ragland and Reuben Foster load up the middle linebacker spots and will be be a force for Fournette to go through. Ragland’s ability to get to the edge and his play pursuit could help take some of the extra yards from Fournette.

CONCLUSION: The key matchup will clearly be Fournette’s running ability against Ragland’s tackling ability. If Fournette can make the Alabama defensive captain miss, he can make anyone miss which would make for another big day on his way to the Heisman trophy. An underrated matchup that will determine how successful the Tigers can run will be Pocic lined up against Robinson. If the LSU center can handle Robinson without a double team, it will allow other blockers to get to the next level and catapult Fournette, Guice or Williams down the field. Advantage: LSU