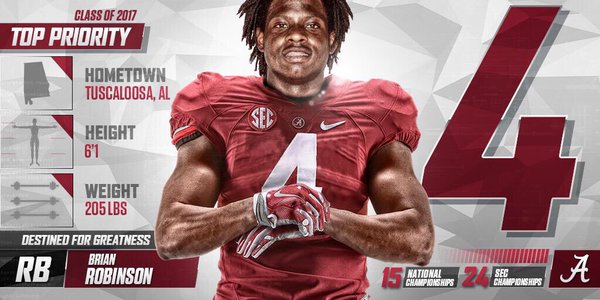 Alabama has picked up its second commit in 3 days and this one comes from the class of 2017. After taking a visit a few miles down the road for the LSU game, 4-Star running back Brian Robinson out of Hillcrest High School in Tuscaloosa has committed to the Crimson Tide via his Twitter account.

Robinson is another big time running back commit in the 2017 class with the commitment of Najee Harris in April and Cam Akers in August. He is 6’1″, 210 pounds and runs hard with some finesse, an ideal back for the Alabama offense. Brian Robinson is the eighth commitment in the 2017 class, but beyond that he is a great story. A local kid stays home and commits to the hometown team, looking to make an impact in the city that raised him. With the big win over LSU, this is the second of what could be many commitments to come.