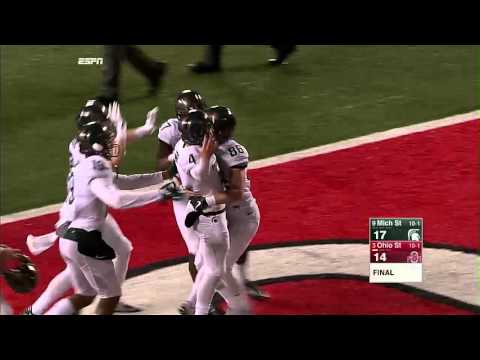 Mixed emotions are fluttering in the Big Ten Conference.

Michigan State has carried the region to a College Football Playoff appearance. It defeated Iowa 16-13 in the conference title game, securing a championship and a 12-1 record.

Sorrow, anguish and aggravation lies on the face of its rival, the Ohio State Buckeyes. Head coach Urban Meyer and Ohio State did the unthinkable last season, capturing a Big Ten championship and a national title despite having two injured signal callers (Braxton Miller, J.T. Barrett).

Switching Miller to wide receiver and constantly flipping between Barrett and Cardale Jones at quarterback hurt the Buckeyes in the long run. Regardless of what Jones did in three games last year, Ohio State would not have been in a situation to make the playoff if not for Barrett.

His leadership took a hit during a suspension late this season; however, the Buckeyes struggled offensively with Jones at quarterback against lackluster competition. Buckeye fans have complained to the College Football Playoff committee on how Ohio State’s loss to Michigan State was better than Alabama’s loss to Ole Miss. The fan base is also pleading its case to say Alabama’s schedule was not strong enough.

Yours truly of Touchdown Alabama Magazine breaks down all reasons why Ohio State did not make the playoff.

1. Loss of Tom Herman/Indecisiveness at QB

Tom Herman is one of the best offensive minds in college football. He ran Ohio State’s group to perfection last year, as it totaled 44.8 points, 511.6 yards, 264.5 rushing yards and 41 touchdowns. J.T. Barrett was having a Heisman-like season prior to an injury. He accounted for 2,834 passing yards, 938 rushing yards, 45 touchdowns and 10 interceptions. Herman’s departure to be Houston’s head coach hurt the Buckeyes.

Ohio State players take pride in poking fun at Alabama’s schedule, referencing that the Crimson Tide has not played many teams in the top-25. The truth is Alabama faced seven ranked opponents upon the Saturdays in which it played.

Ohio State only played one team in the preseason top 25, Michigan State (No. 5). It faced two ranked teams all season, No.9 Michigan State and No.10 Michigan.

3. The timing of Ohio State’s loss to Michigan State

Ohio State played its first ranked opponent on Nov. 21, which was the second to last week of the regular season.

A 17-14 loss to Michigan State negated all possibilities for the Buckeyes to get back into the playoff. Big Ten fans will argue that Ohio State’s loss at home was better than Alabama’s six-point loss (37-43 vs. Ole Miss) at home, but the Crimson Tide’s loss came on Sept. 19. Mississippi won at Bryant-Denny Stadium during week three of the season, giving Alabama a chance to regroup. It has won 10 straight games since then.

The Buckeyes matched up with Virginia Tech in its season opener and took on Michigan State and Michigan at the end.

Games in between those three were not meant for mainstream air time. As for Alabama, it had seven games aired by CBS Sports. The self-proclaim most watched network took on the task of calling Alabama’s games against Georgia, Texas A&M, LSU, Mississippi State, Auburn, Tennessee and Florida.

ESPN aired its meetings against Ole Miss and Arkansas, while ABC handled its season opener against Wisconsin. SEC Network took care of its games against Middle Tennessee State, Louisiana-Monroe and Charleston Southern.

To simply put it, everybody watched Alabama this season.

The Crimson Tide performed up to standard all but once, and yet it was able to get back into playoff contention. Ohio State was probably watched by mass media two to three times, and the one time it needed to win did not happen.

It fell short to Michigan State in a huge conference game late in the season. No matter how good Ohio State’s loss looks, it lost late in the year. A team cannot afford to lose late because it has very little time to regroup.