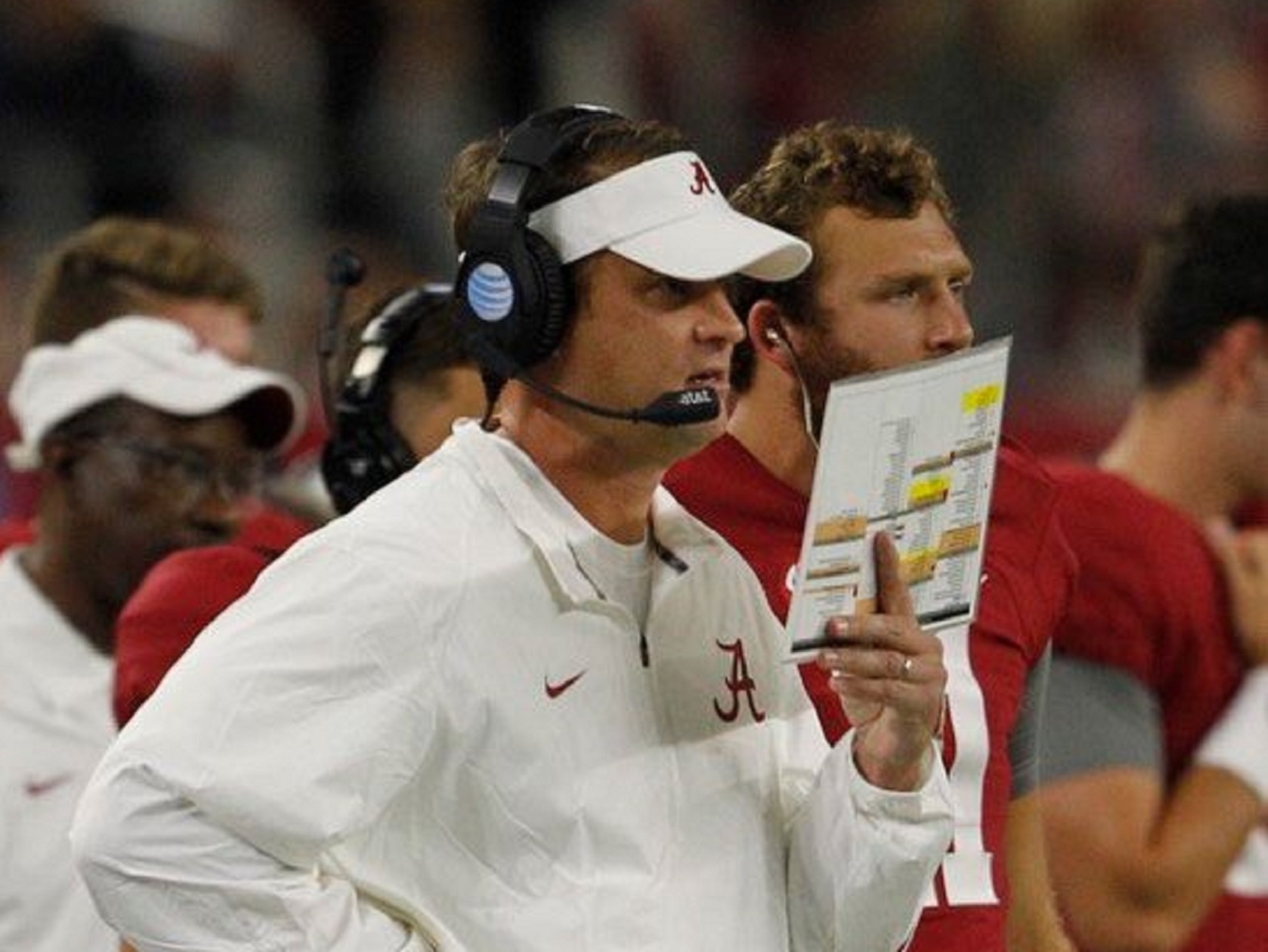 How Kiffin Makes the Tide Roll

Some folks just don’t get it. It was so easy for Bama fans not to like Lane Kiffin over the years, that now that he’s here in Tuscaloosa and ending his second season with the Tide, there are still some that still aren’t sure if he’s right for the team or not.

Let me assure you the answer to that question is an astounding and unquestionable yes!

For those that think the Tide should be rolling a lot more on offense than they are they don’t realize just how average Alabama’s last two quarterbacks have been. By no means do I mean that as a dispersion against Blake Sims or Jacob Coker, each are fierce competitors and each had remarkable tenacity. But you only have to watch Sim’s performance against Arkansas and a slew of Coker’s starts to see them missing wide open receivers, getting lucky with dropped interceptions and even making some routine pass plays become tricky by throwing behind them.

Sims was a running back turned quarterback and he beat out Coker. That’s really all you need to know. For the last two years, while perhaps not making a silk purse, Lane Kiffin has made some sow eared quarterbacks into viable leaders who could get Alabama into the college football playoffs. But it wasn’t just his ability to personally groom these men into better quarterbacks, but setting up situations so they could thrive.

Kiffin did not get to put in the offense he wanted, but an offense that would work with the quarterbacks he had. Fortunately he had one of the best running games in America to lean on during this time. So he established an offense that was built around what his quarterbacks were not only capable of, but something that fit into their comfort zone. Sims had one of the country’s most electric receivers to throw to, Amari Cooper and he exploited that often and it made Sims look great and certainly moved the chains.  Coker spreads the wealth a bit more. Calvin Ridley,  ArDarius Stewart and Richard Mullaney have all stepped up fill that void left by Cooper and all have done well. But both quarterbacks had Kiffin to help get them into situations and scenarios that they could thrive in and make big plays.

So let’s look at how Kiffin does in fact set up the Tide for success with his play calling and knowing what his quarterbacks can do. Perhaps the best and  freshest example was in this last game against Florida.

With Florida surprisingly ahead of Alabama 7-5, Kiffin started two series of downs that would set the Gators up to fail in one big home run play.

In the second quarter, that play occurred when Jacob Coker completed a 55 yard pass to Calvin Ridley to set up the Tide’s first touchdown. It was a great catch between two defenders that got the ball to the three yard line. Two plays later Derrick Henry was able to score a red setting touchdown. So how was that drive Kiffin at work? How was that all Lane Kiffin?

In the drive before that went for a field goal, Alabama had run the ball 10 times out of that 14 play drive. Kiffin watched the safeties, (who were making most of the tackles coming up to support the run defense) cheat further and further up to the line. On the long pass play to Ridley, Kiffin packed the line tight as he had been doing in previous running plays. What that means is that outside receivers were brought in close to the tackles. To the Florida defense, that made it look like the receivers were going to cut inside quick and try and block the safeties before they get to the line to help Gator lineman and linebackers stop the run. Ridley and other receivers had been doing that kind of blocking already and especially on the drive before.

Now when the receivers pack up tight, some defender now has the be the outside containment to keep the running backs from getting the corner. So that means the cornerback has to take a step or two to the outside of the last man,to keep those receivers from blocking them in the middle and opening up the outside. Kiffin now has them exactly where he wants them. With the cornerback now on the outside of the receiver, that left a safety to watch the middle against a speedy Calvin Ridley. On top of that, it was a safety looking at a formation that had been used to run the ball for much of the game. He was of course, thinking run.

The ball is snapped Ridley breaks toward the safety as if to engage him as the ball is faked to Henry. The corner, thinking run, steps away from the receiver,  takes two steps forward to cement the end corner and the safety takes a step to the side to elude Ridley thinking he’s coming to block him. But Ridley suddenly breaks off running toward the safety and dashes down the center of the field. Now the safety smells a rat, but he’s already two steps behind and has to change direction. The corner who had to commit to guarding the edge, now sees the quarterback drop back with the ball and he also knows he’s been taking in, so he turns and takes off in the other direction trying to catch Ridley. Kiffin smiles on the sidelines as he already knows the outcome, much as he did on those televised plays where he throws his arms up to signal  touchdown just as the ball is snapped. He knows the trap is set and the prey fell for the bait.

By now, Ridley is wide open and has at least a four yard gap on the defenders and is streaking toward the goal line. Coker heaves a pass that hangs a bit and doesn’t lead Ridley, but the defenders don’t know that, they’re just running wide open trying to catch Ridley and are too intense on doing that than to look back to see if the ball is in the air. When Ridley slows down to make an adjustment on the ball one defender runs just past him and the other, reading the receiver only, puts up his arms in a vain, too late attempt to try and knock the ball away. Even though the ball wasn’t delivered as well as it could have been, Ridley comes down with the ball at the three because the defenders were so fooled they could never take the time to know just where the ball was. Now momentum and excitement is all on Alabama’s side as Henry finishes off the drive.

Even though the throw didn’t hit Ridley in stride, Kiffin had lulled the secondary into such a trap that he figured they couldn’t catch on or catch up to it fast enough and that proved to be the case. Alabama needed a big play and a touchdown to grab control of the game and Kiffin set the Tide up to get one. Kiffin made it possible for a quarterback to make a big play even if the pass wasn’t perfect and it all started in the previous drives when he kept running the ball in that formation, setting them up for a payoff down the road. That shows the patience, planning and trickery that Lane Kiffin uses.

That Alabama fans is what Lane Kiffin has done for two seasons. He’s taken two very average quarterbacks and put them into positions where they could perform. On that 55 yard pass, Coker just had to throw it up deep because Lane Kiffin knew that only Calvin Ridley would have the time to have eyes on the ball to adjust to whatever throw Coker made, the defenders  would be running blind just trying to catch up to Ridley and Kiffin knew it.

Tide fans may want to say Coker had a great read, but it was all Kiffin. Others may say that they are relieved to see Coker complete a deep throw, but it wasn’t a great throw, it was all Kiffin. Ridley did make a great catch, but he was put in a position to make that catch because of Kiffin. And that Tide fans is what Lane Kiffin has done at Alabama for two seasons.

Sooner or later, Kiffin will go the way of Kirby Smart and go back into a head coaching position. But while he’s here, the entire Alabama nation should embrace Lane Kiffin. He’s doing his job here and doing it well. Saban who has a reputation of spawning other great coaches is enjoying learning some new tricks from Kiffin and being a student. Saban is pleased with the job Kiffin is doing and the results he’s getting. While the Alabama nation thinks with a unified brain that Saban is the smartest coach in the country, then they should default, love Lane Kiffin since Saban does. Well love may be a strong word to some of the Alabama fans, but they should respect the job he’s doing anyway. Maybe that’s the best Lane Kiffin will ever get from the entire Alabama nation and he certainly deserves that.  And now you know why.