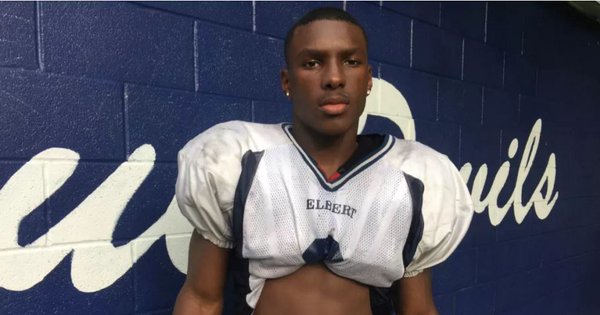 After missing out on 4-star wide receiver Cavin Ridley to South Carolina, and picking up a commitment from 3-star wide receiver Tyler Simmons yesterday, the rich get richer as the number one athlete in the country, Mecole Hardman Jr. out of Elberton, GA has named Alabama his leader. Hardman made this announcement to Hank South of 247sports at the U.S. Army All American Bowl in San Antonio after dropping a loaded top six schools via his Twitter.

There were also many rumors going around this weekend that Hardman was in Tuscaloosa but they were never confirmed. He has said that he will either visit Alabama or Tennessee on January 15th.

Hardman is a big time target for Alabama, especially at the wide receiver position and would be a major addition to the 2016 class, adding their second five-star and potential for other names such as 5-star ILB Ben Davis, 5-star ATH Demetris Robertson, 5-star OLB Lyndell “Mack” Wilson and more. Not only would the Elbert County product boost Alabama through the rankings, he would also boost their receiving core, which will likely get pretty thin next year. He is a versatile athlete that could be used in a Kenyan Drake type of role at h-back and wide receiver. Hardman is set to commit on signing day.