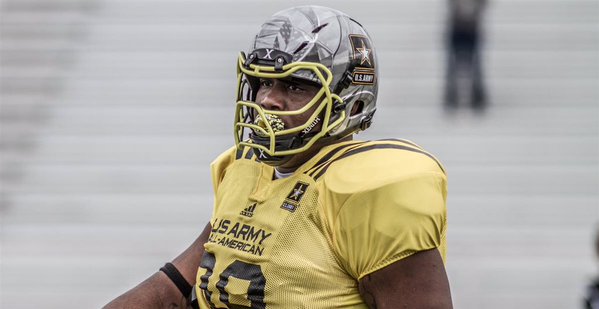 Last week was a crazy one for Alabama defensive tackle commit, Raekwon Davis. The 6’7″ Meridian, Miss. native has been committed to the Crimson Tide since the summer of his junior year, but quietly opened his recruitment back up in December. On January 15, Davis took an official visit to Mississippi State and two days later had reportedly flipped his commitment to the Bulldogs.

After three Twitter bio changes, two commitments, and in-home visits from both programs, Davis went to Twitter to reaffirm his commitment to the Crimson Tide.

The Crimson Tide may now have reaffirmed having the most lethal defensive line class in the country. Davis will be lining up alongside the likes of Kendell “Hulk” Jones, the number 15 player in the country and Quinnen Williams of Wenonah in Birmingham, the fourth-ranked player in Alabama.

All three of these commits bring a different skill set to the Crimson Tide defense that could be an immediate impact on an already deep defensive unit.