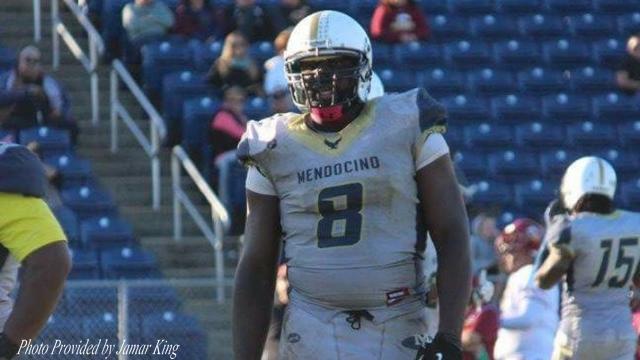 It has been a big whirlwind of a day for Alabama as they now sit at 21 commitments as they pick up a LOI from Jamar King of Mendocino Community College in Ukiah, Cal. King was one of the most sought after JUCO players in the country, being recruited by programs like Ohio State, Auburn, Louisville and Tennessee.

According to his head coach Frank Espy, Jamar King has signed with Alabama and he is excited to get to Tuscaloosa. The 6-foot-5, 285-pound prospect earned an offer from the Crimson Tide in late December, and originally planned on announcing on Monday before waiting until signing day.

King is ranked as the 8th-best JUCO player in California and the 4th-ranked defensive end in the JUCO ranks. He joins a deep defensive line class including Kendell “Hulk” Jones, Quinnen Williams, and Raekwon Davis, which should excite Alabama fans.