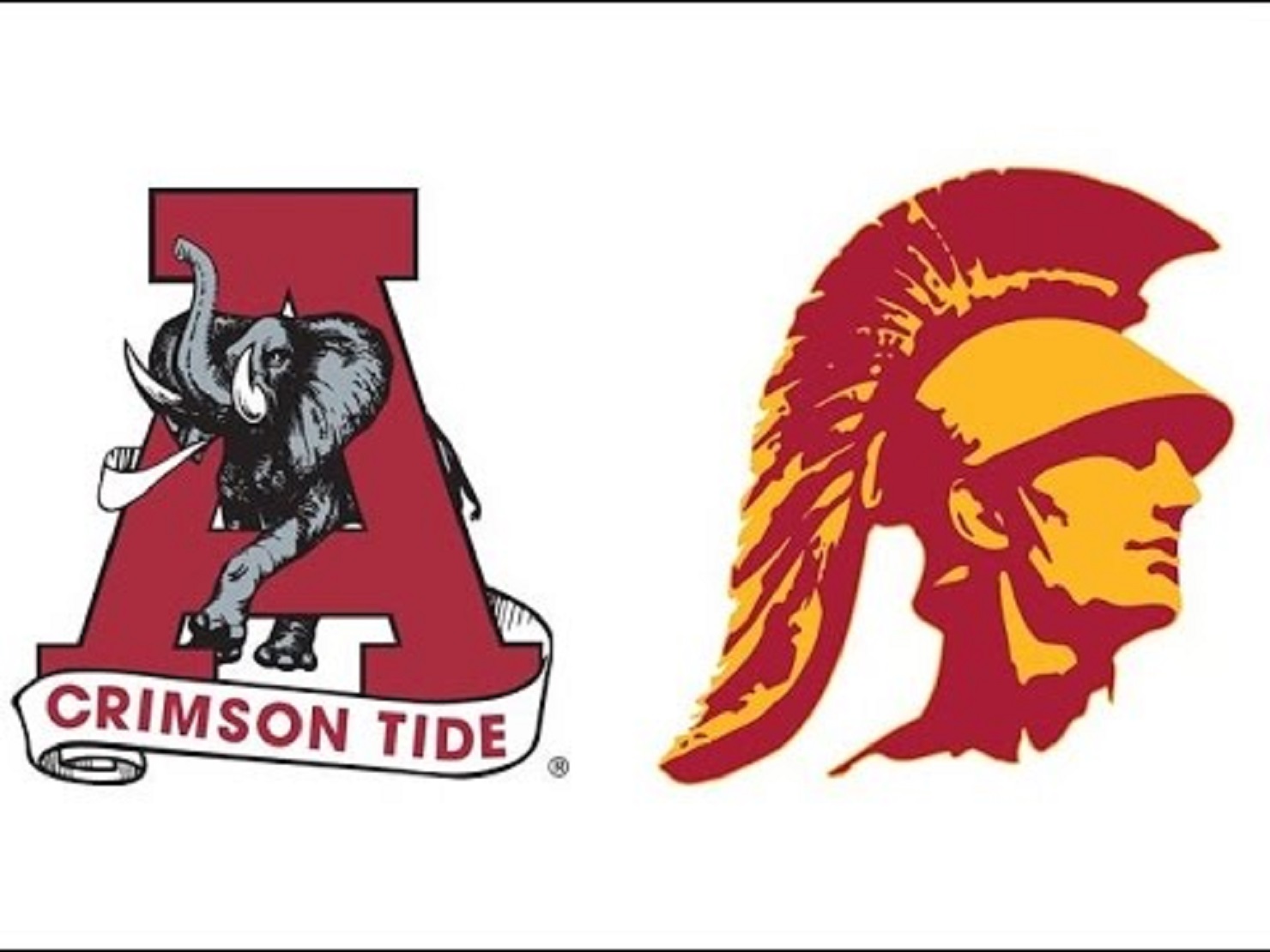 The first game should be a great measuring stick for both programs to see where they are at the start of the season when they match strength on strength. See if you agree with this scenario.

For Alabama fans not knowing what to expect from the Trojans from USC in the first game, there is a lot to seemingly worry the casual fan. First of all they bring in a strong running back duo in Justin Davis and a young gun Ronald Jones II. They are as solid a running back duo as Alabama will face this season and to get those two backs some holes to run through, the Trojans return seven players who started on the offensive line led by 6’9” 350 pound Zach Banner who may earn first team All American honors this year after being named to the third team All American list last season.

That’s good news for USC’s coach Clay Helton, in his first full season after taking over midway through last year, who is banking on the running game being strong enough to dictate their will early on in the season as they break in a new quarterback.

The Trojans know that this will be the best defensive front they’ll face this year, but they are banking on their ability to go strength on strength with the Tide and still move the chains and put points on the board.

USC knows that if the abandon the running game and put the fate of the team in the throws of a first year starting quarterback, that it could get ugly really fast.

They do have some very talented receivers to keep the Tide honest though and JuJu Smith-Schuster, USC’s best man on the outside receiving spot, has moves and speed the Tide had better respect.

If the Trojan quarterback, who could be either Max Browne or Sam Darnold get hot, then this could be an offense that could could battle the boys in Crimson pretty well.

To counter, Alabama has more speed and brawn than any defensive front the Trojans will face this year. They won’t be able to run wide on this very quick defense and their best bet is to pop runs up the middle, but that could prove difficult against this team who seems to make shutting down a running team seem easy.

To help the Trojans keep the defense off balance will be the play calling of offensive coordinator Tee Martin, who will try and utilize an uptempo offense that will keep the Alabama defense from rotating in the great situational players they have. If that name sounds familiar, Martin was the quarterback at Tennessee who defeated Alabama two years in a row and led the Vols to their only BCS National Championship in 1998.

It’s one thing to play a chess match between coaches, but it’s different when the pieces being moved aren’t the same. While USC may be able to impose their offensive will over much of the Pac 10, Alabama is a different animal who will be throwing fresh four and five star athletes at them all day long. That will be the difference. USC has a great starting offensive lineup to put on the field. Alabama can field almost three positions deep on defense with little drop off and in that first crucial game, that could be the biggest difference in this matchup.

Edge in this battle of strength on strength goes to Alabama.

When Alabama has the ball, they’ll face a returning Clancy Pendergast, who was with the Trojans in 2013 and now returns as the defensive coordinator. The last time he was here, USC really responded to his attack, attack, attack style. To use this style this year, he’s got good instinctive linebackers who can react on the fly and his secondary is rock solid and may be one of better ones Alabama will face this season. Iman Marshall and Adorre’ Jackson are talented corners that can defend one on one and Safety Chris Hawkins is just the best of a deep corp of players at the safety spot.

USC knows that like themselves, the Tide will start a rookie quarterback and start off hoping that the running game can dictate the success of the offense. So they’re going to brace themselves up front and try and stop the Alabama running game first. They also plan using Coach Pendegast’s plan of attacking and creating chaos, hopefully shaking up the Tide’s new quarterback.

This could be a problem. As experienced as their linebackers and defensive backs are, the defensive lineman are on the other end of the scale and this could be their worst nightmare as they try and learn these positions and meshing with the other defensemen against two big bruising running backs like Alabama will throw at them in Damien Harris and Bo Scarbrough. Alabama should be able to get the running game going take pressure off the young quarterback having to attempt too much too soon.

To make matters worse for USC, Alabama’s offensive lineman are experienced, big and quick and additional players are going to have to utilized to stop the running game. That could be a huge problem as this will be the absolute best receiving corp that the Trojans will face this year and should one of them spring free, it’s going to cause a score.

Alabama has potent deep threats in Calvin Ridley and Robert Foster along with others and the middle routes have sure NFL talent O.J. Howard at tight end and Ardarius Stewart in slot. If that weren’t enough, both running backs are able to take a screen pass and run to the end zone.

Like the Trojans who start a rookie quarterback, Alabama’s weakness in this first game is the same problem and both teams know that if they can get just average production from that position, that will take enough pressure off the running game to make it flourish.

When you get down to coming up with an edge in this contest of Alabama’s offense against the USC defense, it’s an easy pick.

USC’s new defensive front line just won’t be able to stop this Alabama rushing attack and as linebackers and defensive backs cheat up to provide support, they set themselves to be burned by the speedy receivers Alabama has.