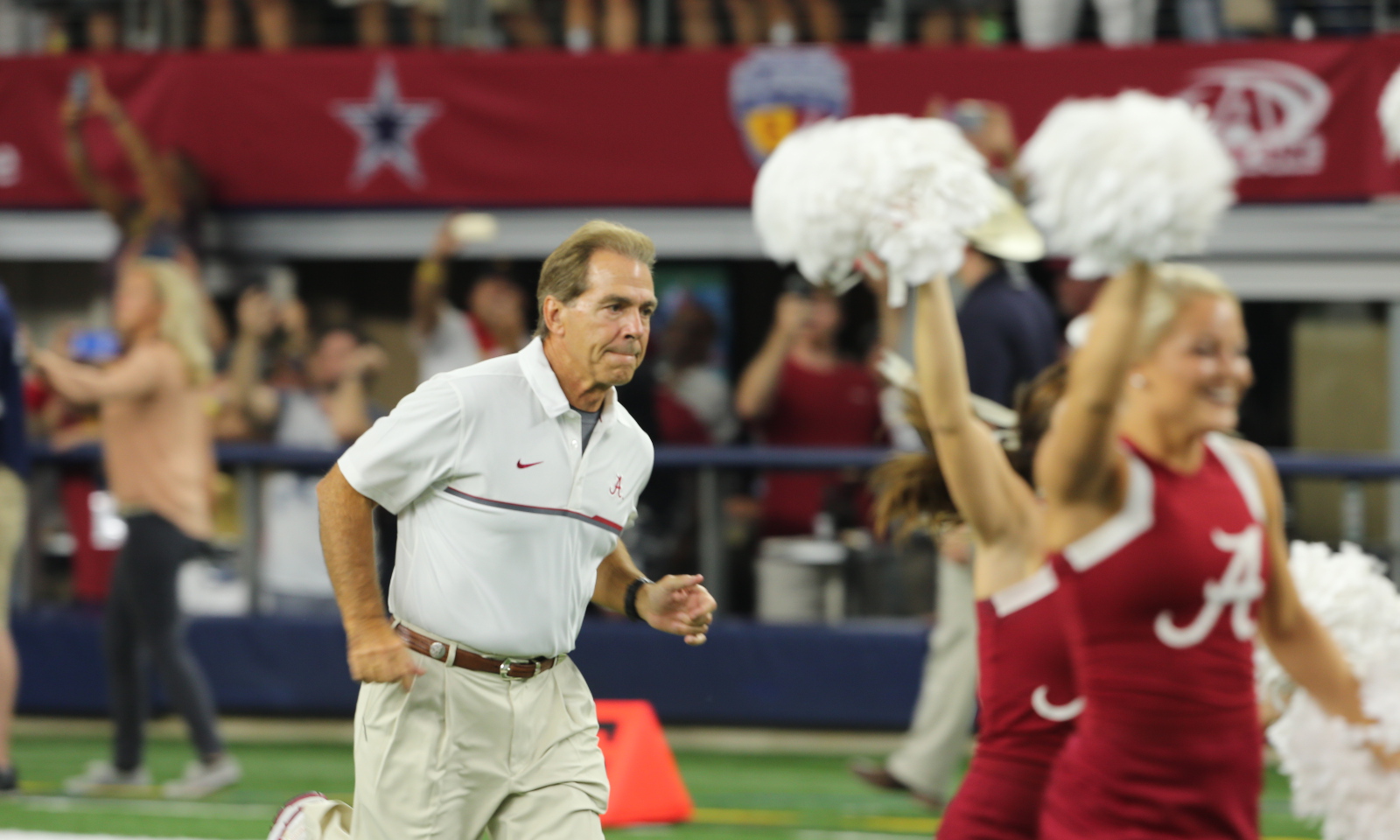 Alabama’s 52-6 win over USC on Saturday was deemed by many as the most impressive performance of the weekend. There were some teams that beat better opponents but no one did it like the Crimson Tide did. They received 62 of the 64 first-place votes in Tuesday’s Coaches Poll and 54 of the 61 first-place votes in the AP Poll. Expectations have always been high for Nick Saban and the Tide but these have hit a new Week One level. The key for the players, and the fans, will be finding a way to realistically manage these expectations.

As we do every year, there were pieces done around the media about the top overreactions to week one in college football. Almost all of them had something to do with Alabama having an easy ride to a second consecutive national championship. FOX Sports called Alabama the most entertaining team in the nation while Bleacher Report used the headline “The Title Runs Through Tuscaloosa, Again.”

No one in the country matched what the Crimson Tide did on Saturday night. However, the rest of the country is not going to sit back and let it happen. Florida State had an big win with a freshman quarterback as well. Even though Clemson looked sluggish against Auburn, they showed they could still win a tough road game with a mediocre performance by Deshaun Watson.

As for the rest of the Tide’s regular season, the schedule seemingly looks much easier after watching other SEC teams play poorly in week one. Yet, no matter how disappointing these teams looked, it was only the opening week. The conference still has the most talent of any other conference in the country along with some of the toughest places to play. So road trips to Oxford, Knoxville and Baton Rouge may not look as scary as they once did, but nothing will come easy.

Jalen Hurts stole the show in Arlington after putting up four total touchdowns after coming off the bench to save the Tide’s offense. However, the true freshman also completed just 54 percent of his passes and turned the ball over twice. If it was not for a busted coverage by USC early in the second half, the narrative around the quarterback situation could be completely different. And I know, you can’t expect perfection, especially from a kid who is making his collegiate debut. And just maybe, he goes on to have one of the best quarterbacking careers Tuscaloosa has ever seen. However, it is still too early to call Hurts a Heisman candidate, as some fans have, and it may even be too soon to call him the quarterback of the future.

Damien Harris and ArDarius Stewart were the playmakers of the offense, despite being overlooked all offseason for the star names. Those two combined for 268 yards while the players that were supposed to make a difference – Calvin Ridley, O.J. Howard, Bo Scarbrough – combined for just 84 yards of offense. It’s easy to look at that and say the Tide were still able to win without their best offensive players showing up. And that may be true but it also can be unsettling to see top players get shut down by a poor defense.

Despite all the ragging I do on your favorite team, this Crimson Tide team is for real and it starts with the defense. They are the favorites this season for good reason but it’s never easy to go back-to-back. With the schedule that’s in front of Nick Saban’s squad, it might still be crazy to think the Tide will not lose a game this season.

Sure, after week one, the quick reaction is to say Alabama should go 15-0 and no one should come close to stopping them. That may end up being true but for now, it’s too soon to tell.