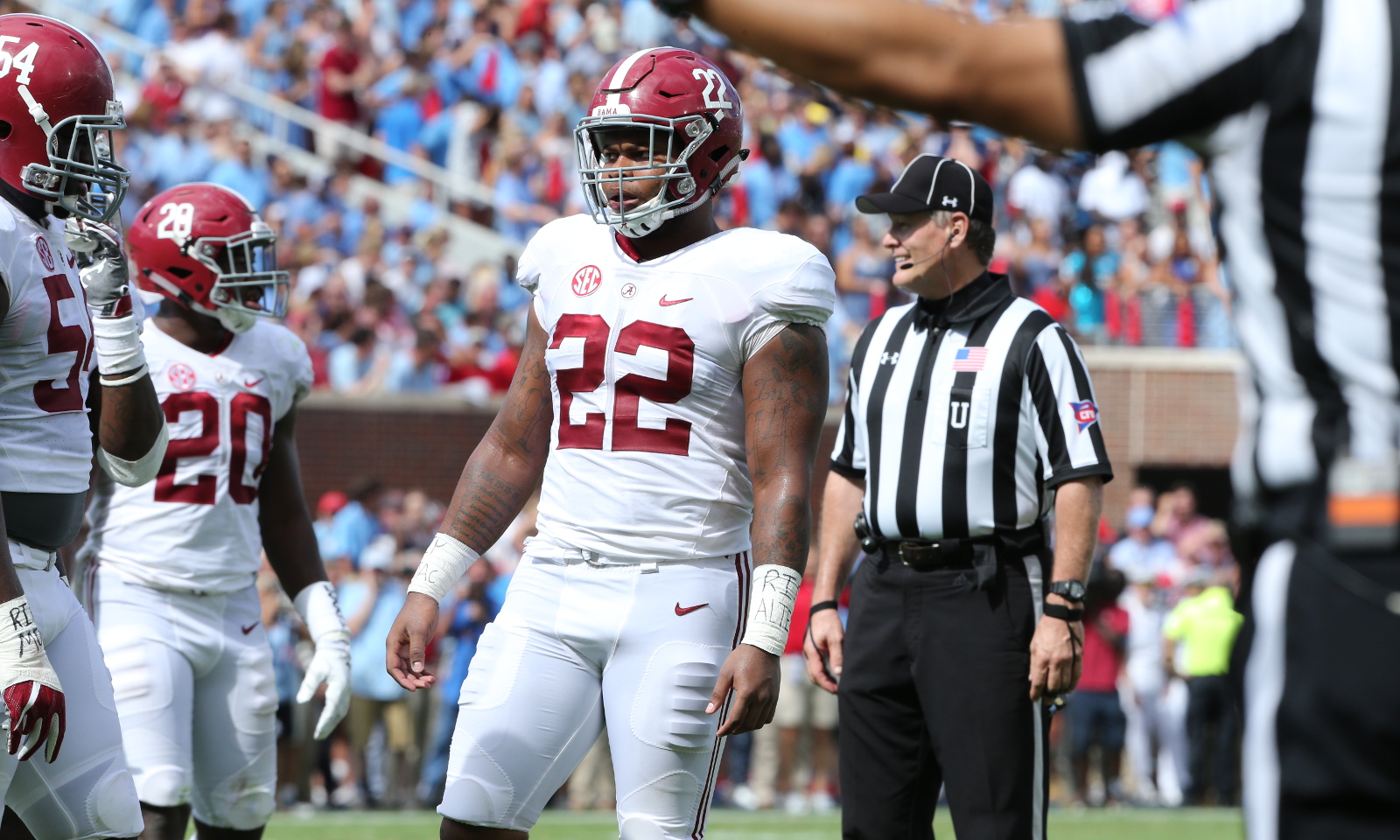 Bozeman made his third start at center and led Alabama’s offensive line, posting a grade of 86 percent on his assignments. The junior did not allow a sack, commit a penalty or surrender a pressure. He recorded three knockdown blocks against Ole Miss, and opened up the Crimson Tide’s rushing attack for 334 yards and two touchdowns on 48 carries (6.95 average).

Harris earned his second 100-yard rushing outing at Vaught-Hemingway Stadium. He displayed vision, speed and power, totaling 144 yards rushing and a score on 16 attempts. His 67-yard burst in the third quarter was a perfect example of toughness and determination. He secured the football and refused to go down after first contact. Harris’ first touchdown of the season—a one-yard run in the fourth quarter—gave Alabama a 41-30 lead. He is fifth in the Southeastern Conference in rushing with 327 yards and a touchdowns on 36 carries.

Hurts appears to have it all at quarterback: toughness, leadership and talent.

Despite taking a shot from Rebels’ linebacker Marquis Haynes in the second quarter, he responded with 304 total yards on offense (146 rushing) and became the first signal caller in Tide history since 2001 to record 100-plus yards pass and rushing in a game. Hurts completed 19 of 31 passes, including five that went in excess of 17 yards or more. He accounted for 14 first downs, and helped the team pull out a dramatic victory.

Chad Kelly will have nightmares about Anderson and Foster for a long time. Both guys consistently leveled him to the ground while Anderson’s strip sack in the third quarter for a touchdown (Da’Ron Payne), was one of the pivotal factors in the game. Foster had a game-high 12 tackles, and the duo limited Ole Miss to 106 rushing yards on 32 carries. Anderson’s night ended with three total tackles and a tackle for loss to pair with a sack.

Tomlinson finished third on the team in tackles (seven) and collected a pass breakup.

Griffith knocked in a pair of field goals (32 yards, 30 yards) and made five extra points. He totaled 570 yards on nine kickoffs, including seven for touchbacks. Griffth averaged 63.3 yards per attempt.

Holcombe’s third special teams tackle of the year pinned Ole Miss inside its 10-yard line. Return specialists Kailo Moore and Carlos Davis did not have much success finding space against Holcombe and the Tide.

Jackson ignited a fire on Alabama’s sideline with a 85-yard punt return touchdown. He’s reached the end zone on four of 11 career touches (nine interceptions, two punt returns). His effort cut Mississippi’s lead to 24-17, after it led 24-3 for much of the first half. Jackson also ended the game with two tackles from his safety spot.