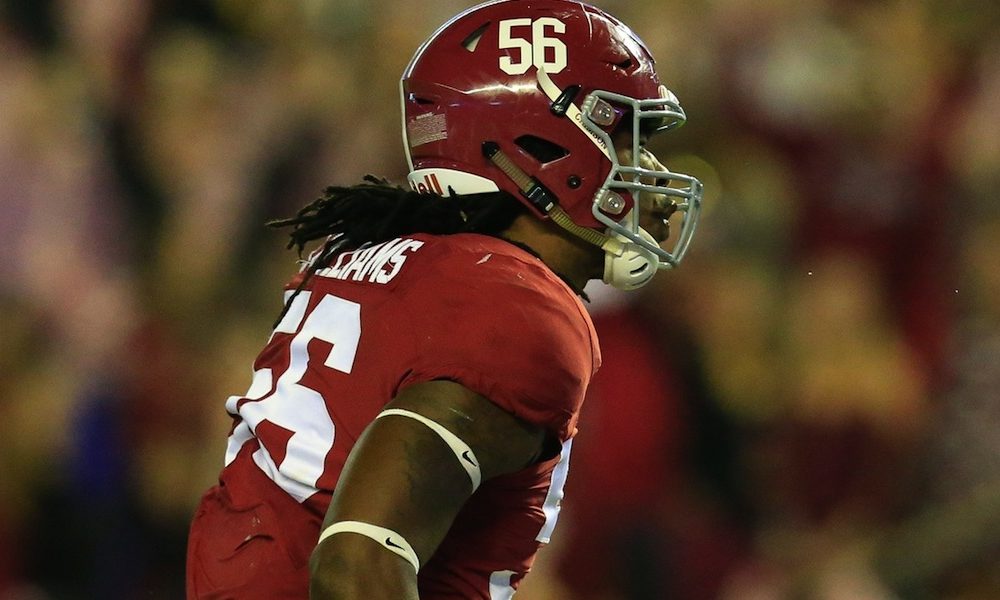 TUSCALOOSA—Even suspension couldn’t hold Tim Williams back from being lit against Kentucky.

The Alabama linebacker missed the first half, due to being arrested last week for reportedly carrying a gun without a permit (by the way, he did have one). He’s found ways all season to harass quarterbacks, but hasn’t been able to create sacks. While the Crimson Tide entered the second half with a 17-3 lead, Williams decided to alert college football on why he’s projected a first-round value. The 6-foot-4, 252-pound senior recorded four total tackles, including three for loss and a sack of Wildcats’ quarterback, Stephen Johnson. Williams was credited for creating one of two turnovers; a forced fumble that was recovered by Ryan Anderson. In two quarters, Williams assisted the Tide in limiting Kentucky’s offense to 161 total yards and no touchdowns.

When asked about Williams suspension only being for Saturday, Saban responded with “yes.” Williams took the field for warm-ups and according to safety Ronnie Harrison, he was amp’d up before the game even started.

“He was itching and ready to go,” Harrison said on Williams.

“He was the one getting everybody crunk before we came out of the tunnel. I was just proud of him.”

After apologizing to teammates and having a strong performance, Williams appears to be back on track to striking fear into the hearts of opposition. He may not break Derrick Thomas’ record, however, he does have 10 total tackles, 4.5 tackles for loss, 2.5 sacks, five quarterback hurries and two forced fumbles in five games.