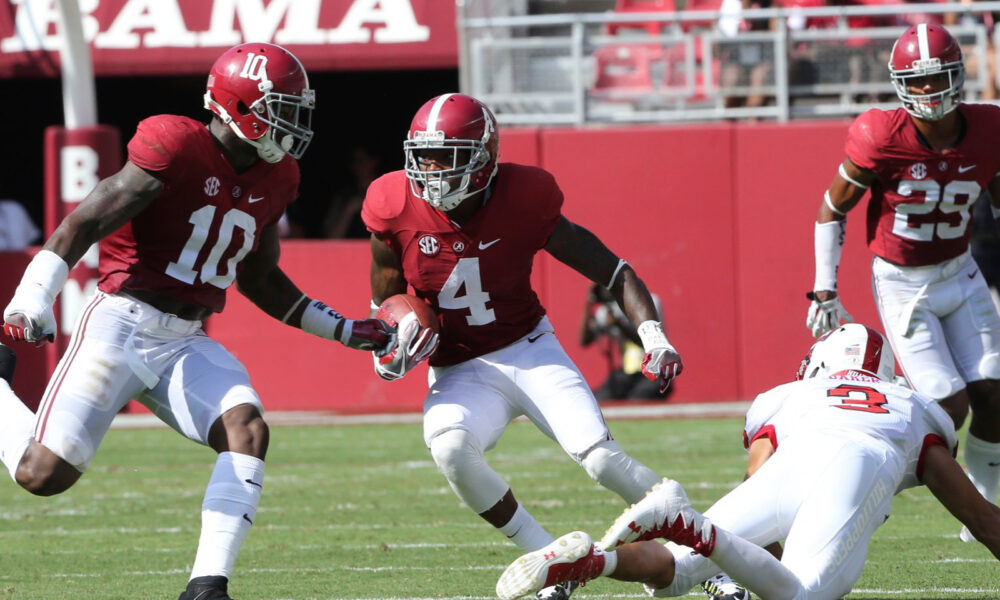 TUSCALOOSA—O.J. Howard is not just a tight end. He’s a negotiator.

After showing patience throughout the 2015 regular season, offensive coordinator Lane Kiffin finally saw why fans are enamored with him. Howard caught eight passes for 267 yards in the College Football Playoff, including five receptions for 208 yards and two touchdowns against Clemson in the national title game.

Ex-Alabama standout Cyrus Jones was a good defender, but what made his draft stock soar was his versatility as a player. His days of being a running back and wide receiver at Gilman High School, along with encouragement from Reggie Ragland, prepared him for a year in which he had four punt return scores.

It took a bet to place Jones on punt return, but as for Jackson, a few phone calls did him in.

“I really have to thank O.J. [Howard] because he was the one that pushed Coach Burns all offseason to put me back there,” Jackson said Wednesday.

No one knows the full conversation between Burns (special teams) and Howard that got Jackson fielding punts, but after seeing him return two for scores against Tennessee and Ole Miss, it must have been good.

Jackson did take a moment to talk about it with the media.

“O.J. called me during the offseason, while he was watching one of our old games,” he said. “He told me that I should ask the coaching staff to try me on punt return. He ends up calling Coach Burns all summer and he said, ‘your boy O.J. told me to put you back here. Don’t let him down.'”

Persistence on behalf Howard landed Jackson as the team’s third-string punt returner, but his skill set and confidence from being a receiver and defensive back propelled him to a starting role. When asked about the jump from third to first-string, Jackson said it was due to mistakes from Calvin Ridley and Trevon Diggs.

“I don’t think they were as comfortable as punt returners,” he said.

Upon Jackson’s first punt return touchdown against Ole Miss, which was an 85-yard run in the second quarter, Howard was the first player to congratulate him and gloat to Burns.

“He [O.J. Howard] started saying ‘I told you Eddie. I told them. I told them,'” Jackson said bursting into laughter.

He has the best punt return average nationally, per ESPN (25.8) and stands second in both return yards (232) and touchdowns. As for returning the favor to Howard, Jackson said he’s been trying to get him the ball more.

“You see the things he can do when he’s matched up against a linebacker or one of us  in practice. It’s just crazy. You got to feed him sooner or later.”