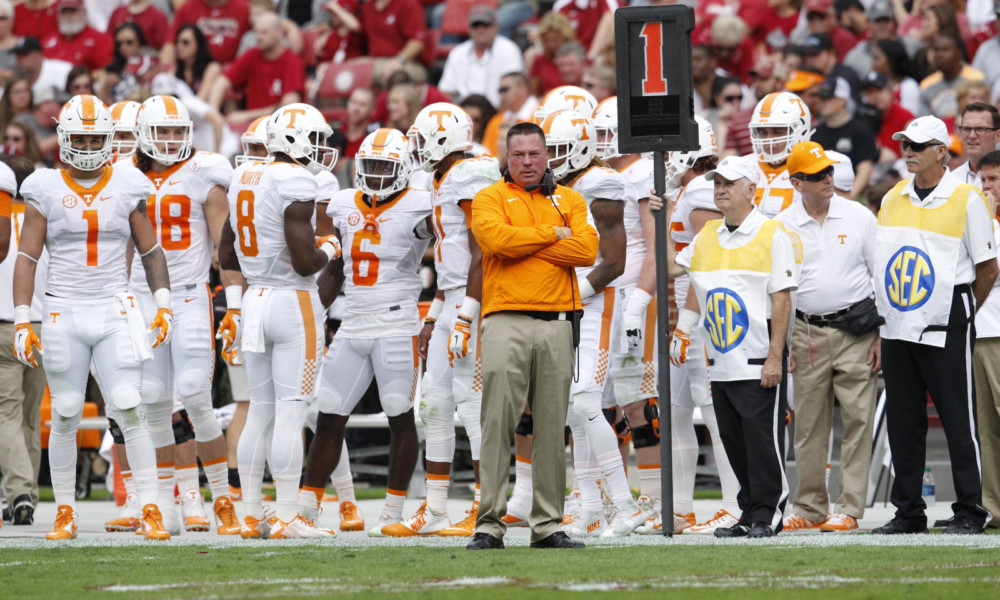 TUSCALOOSA—Numerous injuries to impact players will be his escape card, but a lot was expected from Tennessee head coach Butch Jones and the Volunteers this season.

Media personnel and avid fans of Rocky Top pinned this year as a moment where the Volunteers would finally have a enough talent and experience to defeat some upper echelon teams in the Southeastern Conference.

Despite slow starts, Tennessee made good of its claim in beating two ranked opponents (Virginia Tech, Florida), while escaping Georgia with a win. Even in a tough loss to Texas A&M, Tennessee took it down to the wire.

Captained by Joshua Dobbs, the Volunteers outscored the Aggies 28-14 in the second half, before ultimately falling 45-38 in overtime. Spirits were high at Neyland Stadium when Alabama came to town on Oct. 15.

A few media pundits chose Tennessee over the Crimson Tide, due to offseason hype and the experience of Dobbs over Jalen Hurts. The hope was a competitive game, however, the reality was a bloodbath.

He had success in the past, but Dobbs would be ineffective against the Tide this time. Alabama’s defense registered three sacks, 10 tackles for loss and an interception returned for a 58-yard touchdown (Ronnie Harrison), while its offense posted 594 yards (Hurts, 304 total yards and four scores). Dobbs and company were held to 163 yards of offense, with 92 of coming off Dobbs’ arm in an embarrassing 49-10 defeat.

Tennessee would fall once more in the following week to South Carolina—a team that none picked to attend a bowl game. Losing to Texas A&M hurt, but the way it lost to Alabama angered the Vols’ fan base. On the heels of three straight losses, two Tennessee players contemplated leaving the program. While defensive end Jonathan Kongbo is staying, star running back Jalen Hurd made his transfer official via the Tennessean.

The 6-foot-4, 240-pound junior discussed with Jones on Monday concerning his decision to transfer and Jones accepted it, per the publication. Hurd, a five-star prospect, totaled 28 yards rushing against Alabama and 16 yards against South Carolina. He sat out the contest against Texas A&M, due to an undisclosed injury.

With four players gone and others recovering from injuries, Tennessee has fallen from the team of destiny to a program that’s scratching for a bowl berth. Its recent issues have come at a critical time, especially with the usual SEC bottom feeders (Kentucky and Vanderbilt) playing at a high level. The Volunteers should obtain its sixth win of the year against Tennessee Tech, but earning a more quality postseason game won’t be easy against Kentucky, Vanderbilt or Missouri. Injury bug or not, Jones will be heavily evaluated after this season.