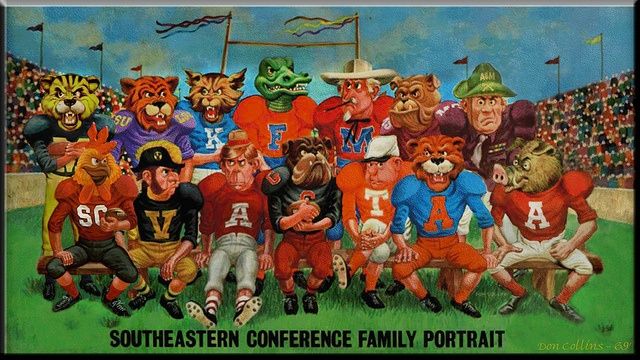 Well folks, as sad as it is, the season is winding down and the games get more important. Is your team on the Losers list? See if you agree.

Well folks, I thought I might wind up with a loss, but I didn’t expect it to come from the teams it did. We were worried over the big games and got all those right but somehow Missouri made us miserable and Mullen’s Mutts over in Mississippi let us down as well. So going 5-2 this week puts us at 58-13 for the year and that makes us more than a little sad. Though it’s still about an 82, a low B is not where we wanted to B.

Now this is a short week as teams take a bye week to lick their wounds and survey their season ending schedule. This week we’ve got one we’re worried about, one classic cupcake and one cupcake that’s gonna put up a fight before they get their icing licked.

We think this is the week that we can pick perfect prognostications again and partake perfection. At least that’s our story and we’re sticking to it.

Kentucky at Missouri – Starting of the Saturday slate an hour before noon, the Kentucky Kitties take their Tabbies to the Missouri Cat show and hope to pull off a blue ribbon. Both these teams are troubled Tabbies and the season just hasn’t gone the way they would have hoped and neither is looking like a bowl team at this point in the year.

The Mildcats from bluegrass country have looked better of late with Stoops calling the defense and he hopes he can take a few of these cats lives and eak out a win to keep out of the SEC East cellar.

But coach Odum ain’t about to let another Cat come in to his cat box and create a catastrophe so he’s gonna hide the welcome mat and catnip for this little party and claw these cat cousins like nobodies business and send ’em home without a box of bandaids. In the only game that worries us, Larry’s loser – Kentucky

Oops! Wrong cat fight photo but it’s just as pointless as this game.

Florida at Georgia – McElwain’s Mud Puppies slither on up to Red Clay Country to take on Kirby’s kicked to the curb Canines between the hedges at 2:30 in the game we thought earlier might decide the East.

With nothing to play for now but some pride and a better bowl game, Kirby’s hoping his Mutts have gotten a little Smarter and can finally act like the dashing Dogs they were supposed to be.

But with a shot at tilting another title his way, he ain’t about to let his Gator group be grabbed and gobbled up by a bunch of hungry hounds and we don’t see this happening either. Larry’s loser – Georgia

As long as Peta doesn’t find out, these Gators will try some Bulldog!

Samford at Mississippi State – In the other 2:30 game we have us a battle of the Bulldogs when the Birmingham Bullies come over to tangle with the Magnolia State Mutts.

Mullen’s Mutts got their nose slapped with a rolled up paper last week and he knows that now a bowl game is something they’ll be watching on TV this year. But he wants to end things on a high note so he’ll have his hounds ready for this one.

Now Samford is hoping that their 6-1 record will intimidate the country cousins and that they can pull off the upset, but it’s easy to rack up record in the kiddy corner, but they’ll soon find it ain’t so easy in the SEC. Larry’s loser – Samford

This Birmingham bunch of Bulldogs just ran out of gas.

Auburn at Ole Miss – This week in a 6:15 sunset showcase, the Pussycats from the plains travel over to Oxford to try and rip the Rebels a new one and keep this hot streak going.

Coach Hugh has been at the chalk board all week trying to figure out why his men Freeze up at the end of the season after starting so hot and he’s hoping he’s figured out how get his Rebels ready for a roasting of this Tony the Tiger tribe from Auburn.

But the Cats in this Gus Bus have their pedal to metal and when these Rebels step in front of them to try and slow them down, it’s just more road kill on the Mississippi highway. Larry’s loser – Ole Miss

This wasn’t how Hugh Freeze wanted today to go…

Tennessee at South Carolina – In the other sunset special at 6:15, the Vols saunder over to South Carolina in hopes of keeping their SEC East dreams alive as they take on the resurgent Roosters.

Now Muschamp knows if he can pull off the upset here, a bowl is beckoning and he’s been sharpening the spurs on his flock of footballers and is ready for these invaders from hill country.

But Butchy boy has his eyes on a bigger prize and even though these Carolina Cluckers are going to smack the in the pucker, they’ve got more more talent and can outlast this pack of peckers. Larry’s loser – South Carolina

New Mexico State at Texas A&M – In the prime time slot at 6:30, it’s an all Aggie fight as the Sand State Aggies take on the Texas tribe.

Coach Kevin and his collie loving clan are still smarting from the stomping they got under the feet of the pachyderm pride in Tuscaloosa last week, and they plan on taking out revenge and fortunately their next opponent is the poor man’s Aggies from cactus country.

Now there’s a reason that Coach Doug Martin is one of the lowest paid coaches in all of college football and when you see the product he puts on the field, it’ll all become clear. Larry’s loser – New Mexico State

When Aggies fight each other…

Well, that’s it for this week folks! This week was slim pickings but next week is going to have some real contests to be conflicted over, so till then, pray for your favorite team, find a four leaf clover and try whatever you can, but if they wind up on this Losers List, there’s really nothing you can do but just wait for the disappointment.

Ok dog, we’re outta here. Aren’t you supposed to have my houses shoes handy for being wrong last week? Ah you can teach an old dog new tricks.