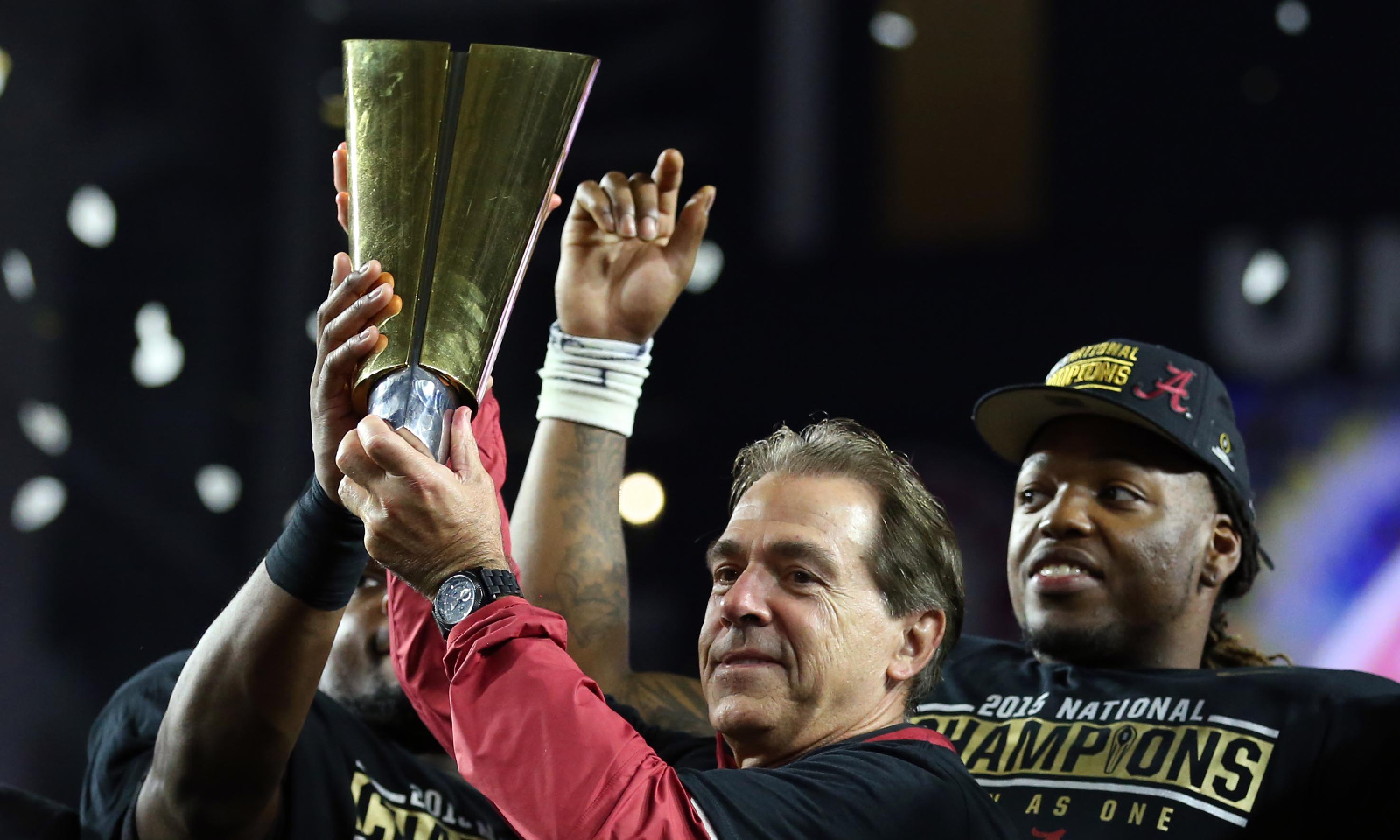 Over the past 327 days, there has been plenty of things that have made people disagree with each other. However, one thing that most people seem to understand is that the year of 2016 has been one to forget. From celebrity deaths to natural disasters and everything bad in between, this year has given everyone something to frown about. But as the world tries to chip away at humanity, sports have come in to save the day and saved most of us from the brink of insanity. With all the bad that has happened in 2016, the world of sports has provided one of the best ever.

To start the year, Alabama and Clemson played in one of the best national championships of all time with the Crimson Tide taking the trophy home. Not too long after that, the NFL sent off one of the greatest players of all time with another Super Bowl victory. In March, college basketball wanted to show off what it could and gave us a memorable tournament that ended with possibly the greatest shot in the sport’s history. In the English Premier League (yes I know that is soccer), a 5,000-1 underdog won a title. During the summer, the King finally brought a championship home with him to Cleveland after coming back from a 3-1 deficit against the best regular season team of all-time. Of course, America’s pastime could not be overlooked and baseball gave us a broken 108-year curse when the Chicago Cubs won the World Series in the best Game 7 that the sport has ever seen.

So when you are sitting around the dinner table after devouring your weight in food, don’t start that foreign policy conversation that you know will make your uncle mad.  Don’t bring up all the bad things that happened this year. Talk about this weekend’s big slate of college football games. Stay positive and be thankful for what the world of sports has given us this year. And the best part is, the sports are not stopping anytime soon with two weeks of big games that will determine the final four teams to play for a national title. Let’s take a look at the next 10 days and see what games could have national title implications.

(All times are central)

The college football weekend gets started a little early during Rivalry Week as two Top 25 teams face off on FOX at 2:30 p.m. Washington and Washington State will be playing in the 109th meeting of the Apple Cup. The Cougars will host the rivalry game that has returned to national relevance after being just eight years removed from the two teams combining for just two wins in the 2008 season. The winner of this year’s meeting will win their division and will play for a PAC 12 Championship next week. The Huskies are in need of a boost to their strength of schedule to impress the committee so this would be a step in the right direction.

If West Coast football does not get you excited, maybe Big Ten football will. Nebraska travels to Iowa on Friday for a 2:30 p.m. kickoff on ABC. The 17th-ranked Cornhuskers will be looking to keep their Big Ten title hopes alive while Iowa will be playing the part of Team Chaos. An Iowa victory would be the first step in setting up a four-way tie for first place in the Big Ten West division (with the help of a Wisconsin loss to Minnesota). However, if Nebraska can get the win and the Badgers lose to Minnesota on Saturday (2:30 p.m., BTN) the Cornhuskers will be going to the conference championship game with an improbable playoff spot on the line.

The best week of the college football season will get started early as Michigan and Ohio State will face off at 11:00 a.m. in what is being dubbed the “Game of the Year” by ESPN. The Wolverines and the Buckeyes will seemingly be playing for a spot in the final four but it is actually not that simple. A victory for Ohio State paired with a Penn State win against Michigan State (2:30 p.m., ESPN) would send the Nittany Lions to the conference championship game while the Buckeyes would happily sit with a clinched berth to the College Football Playoff. Urban Meyer’s squad could still win the Big Ten East division if Penn State falters but I’m not sure that is what their fans should hope for. It’s easier if Michigan can pull off the win on the road, as a victory would clinch the division for the Wolverines.

The big day continues at 2:30 p.m. on CBS when the nation’s top-ranked team hosts its cross-state rivals in Tuscaloosa. Alabama should be confident where they are right now, as they likely could drop one of their final two games and still make the playoff, but that does not mean they will be taking it easy on Saturday against Auburn. The Tigers are still ranked 13th in the latest poll and will be playing for a Sugar Bowl berth which will probably go to the second ranked team in the SEC. Most importantly, though, the Tigers will be playing spoiler. And no one plays spoiler better than a rival.

The fun continues on Saturday night with a few games that should get everyone’s attention being played under the lights. At 6:30 p.m. on ESPN, the 4th-ranked Clemson Tigers will host South Carolina in a game that has been unpredictable over the last few seasons. On FOX, Colorado and Utah will kick off at the same time as the 9th-ranked Buffs (greatest nickname) will look to clinch a spot in the PAC 12 Championship Game. Colorado still has a good shot at the playoff and could have two games against Top 25 teams to prove it over the next two weeks. In Tallahassee, Florida will try to stop a three-game losing streak to its in-state rivals. Both the Gators and the Seminoles are still trying to earn a spot in a New Year’s Six bowl game. That game is scheduled to kick off at 7:00 p.m. and can be seen on ABC.

Rivalry Weekend could be good enough to fill us up but as football fans, we will need to suck it up and prepare for the next week because it could be just as good. At this point, only two Power 5 championship games are filled out while the other three will all be decided on rivalry weekend.

In the ACC, Clemson should have everything wrapped up and could have a chance to clinch a spot in the playoff against Virginia Tech or North Carolina next weekend. The Hokies and the Tar Heels are currently tied (with VT holding the tiebreaker) and each team plays their in-state rival this weekend. North Carolina hosts NC State on Friday in an 11:00 a.m. kickoff on ESPN while Virginia Tech hosts a very bad Virginia team on Saturday morning. I’d give the edge to the Hokies but I do not see either of these teams giving Clemson any trouble in Orlando.

The Big XII does not have a championship game but this season worked out to where two rivals will play for the title next weekend. Oklahoma will host Oklahoma State next Saturday in a game that will kick off at 11:30 a.m. and will feature two Top 10 teams with an outside shot at a playoff spot. Both teams already have two losses but a conference title and a little chaos could take either of them into the final four.

The SEC Championship Game is already set and may not mean much on the national level if Alabama wins the Iron Bowl. The Crimson Tide would likely still go to the playoff at 12-1 but a 3-loss Gators team with wins over Florida State and Alabama to end the season may be looking at a long shot chance at a national title. Odds are not in the favor of Jim McElwain’s team but it would certainly be interesting to see how the committee handled that situation.

The final two conference championship games have yet to be decided. In the PAC 12, there are currently four teams that could still win the conference championship. If Colorado can beat Utah on Saturday, they will clinch the South division. However, if the Utes pull off the upset then USC will earn a spot in the title game. As mentioned before, the Apple Cup will be played for the North division title. All four teams are playing well right now and it would be tough to argue against this conference champion in the final four (unless it is Washington State).

The Big Ten is taking drama to a whole new level and we have no idea who will be playing in this championship game. Five teams still have a shot at winning the conference championship game and all five of those teams have a chance at making the playoff. Four of them are already ranked in the Top 7 and they all deserve their spots. I think this game ends up being Ohio State vs. Wisconsin but it could be Penn State vs. Nebraska. In any case, I think the champion gets an automatic spot in the College Football Playoff and the Big Ten has the best chance of getting two teams in the final four.