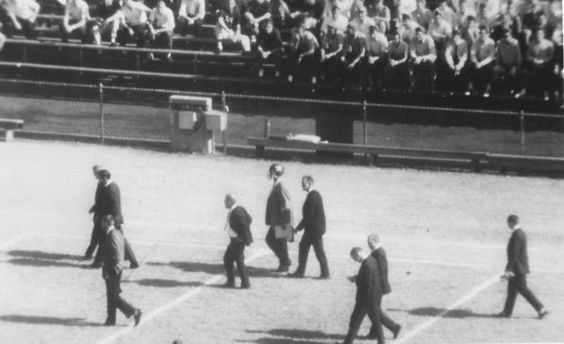 Here are just a few stories to give you a break from all the NFL Draft stories that you may not have known about Coach Bryant or Alabama. Enjoy and let us know in the comment section what other things you’d like to learn about Alabama football.

You know, it’s sometimes good not to be in the rush of football season to just sit at the computer and do a fun article that gives readers some insight and history of the Alabama football program. Today is one of those days so while everyone else is absorbed in the NFL draft process, here’s a break from all of that and some thoughts I’ve been wanting to pass along for a while.

The Day Paul “Bear” Bryant had to wear a helmet as a coach.

Yes, I’m sure that when Coach Bryant played his last game at Alabama, he thought he’d never wear another football helmet again, but that was not the case. On November 14, 1964, Bryant sought out an used helmet to wear as he walked past Georgia Tech fans on the way to the locker room.

Though it’s hard to read the number, that’s Bryant with the helmet on. (Photo-Pintrest)

How did this come to be? Well, that’s an interesting story and part of a two part story that started three years earlier in 1961. That year, a Tech punt return man, Billy Richardson signaled for a fair catch and every relaxed. Everyone that is but Alabama coverage man Darwin Holt, who blindsided a tech blocker, Chick Graning and left him with a broken jaw, five missing teeth, a broken nose, blood in his respiratory system, and a severe concussion. Tech fans were livid as was the team and coach.

After the game, Tech’s legendary coach Bobby Dodd told Bryant he not only expected an apology, but disciplinary actions taken by Holt. Brant refused both. This started a war between the two schools that led to another action which finally drove Georgia Tech to leave the SEC, despite being on of the more successful programs in the league. From 1933, Tech won five SEC titles in just 19 years. Auburn for instance, has only won eight SEC titles in 83 years.

Fans in Atlanta hated Alabama so bad that tensions were razor sharp. Two years earlier when the game was in Atlanta, fans hurled whiskey bottles at Bryant as he left and in this game, Bryant chose to take no chances. Georgia Tech hatred of Alabama caused the stopping of this long standing series, one of Alabama’s longest. Until then, it was quite a brawl each year with Tech usually winning as many as they lost. Even the Alabama fight song references this rivalry in the line that says, “Send the Yellow Jackets to a watery grave”.

The nail in the coffin for Tech leaving the SEC was the so-called 140 Rule that allowed SEC schools to give 140 scholarships for men’s basketball and football. Tech felt this did two bad things. It lead to over-recruiting of players which also led to schools pushing out underperforming players to make space for newer and potentially better ones. When the SEC failed to adopt this rule pushed by Tech, they left the SEC.

Tech, after leaving the SEC was never the powerhouse it used to be. It gave the city of Atlanta to the Georgia Bulldogs and the in state power was lost and never regained.

Few realize that Georgia Tech was ever in the SEC, so was Tulane and Sewanee. Even less realize that even though they were in the league for about 20 years that they still have more SEC Championships than seven current members and just one less than Ole Miss and just two less than Auburn.

Tearing down the goal posts? Not at Alabama.

After beating Alabama, the goal posts came down in Oxford. (Photo-AZCentral .com)

Alabama fans have never torn down the goalposts after a home win. This partially comes from Paul “Bear” Bryant who told players and fans to “Act like they’ve been there before” and another quote when asked why that never happened at Alabama Bryant said, “We expect to win to there’s no need for such things when we do.”

While some folks in opposing fan bases see this as a “cocky” attitude, Bama fans have been admonished to act like winning was a pre-ordained. About the only post game celebration that goes on in Tuscaloosa is the “Rammer Jammer” cheer. Several coaches have wished this tradition would cease, but few have wanted to raise the ire of the fans in trying to make that an official policy.

Not all coaches got dunked by water after games

Most put the birth of post game dunking sometime in the mid 1980’s. This was after the Paul “Bear” Bryant era was over, so did Bryant never get dunked?

Yes, Bryant got one and only one “shower” in his long career. From the book “The Junction Boys”, this tale was told of Bryant and his Texas A&M players going from a one-win season to champions of the Southwest Conference in just two years. In that book, the story is told of Bryant taking the team out to the middle of nowhere in blistering heat putting them through a hellish training regime that saw most of the team quit by sneaking away in the middle of the night. But the ones that survived got a bit of revenge when in post game celebrations in the locker room after winning the conference championship and beating Texas for the first time in 33, this occurred per the author of that book.

“In Austin, Bear Bryant felt the spray of the water on his face and was suddenly drenched from hair to alligator shoes. The Junction Boys hoisted him on their shoulders and threw him into the Memorial Stadium showers. Then Smokey was doused.” (end of quote) Smokey, the beloved Collie mascot also got the first and only shower too. Bryant took it all in stride and later called that one of the happier moments in his life.

In modern times this “shower” is seen by some coaches as a great thing and others, like Nick Saban, as simply a reward he lets his players do only after winning a championship. You can tell by his expressions it’s not something he enjoys at all, especially the one in 2009 when Crimson Gatorade was poured on his white shirt giving him a pink shirt to wear for all the interviews.

While most think Alabama has not indulged change in their uniforms, the contrary is the truth. While it is true that Alabama is slow to accept change, there have been a few dozen changes over the years.

In modern times, the first game Alabama players had names on their jerseys was the 1981 Cotton Bowl. They were off the jerseys for a time afterward, but returned for good a bit later until today. White shoes were allowed in 1980 but Alabama went back to basic black in 1988, only to have them go to designer shoes two years later.

The Crimson Tide signed a seven-year extension with Nike in 2010, making it the most lucrative Nike deal in college sports. Alabama is sporting the swoosh at least until 2018. Their newest extension is valued at $30 million in cash.

Here’s a history of these changes with thanks to the Bryant Museum.

1955 – White helmets, no stripes on pants, shirts, or helmets, plastic face guard
1956 – Facemasks, Crimson stripes on helmets
1957 – Numbers on side of helmets. This was the dawn of the helmet still used today.
1958 – White helmets with crimson stripe, three stripes on arms, numbers on arms and helmets, white pants with two crimson stripes down leg
1959 – Last year with stripes on arms
1960 – Crimson helmet used in bowl game, white numbers on helmets, white stripe down middle of helmet
1961 – Red and white helmets used
1962 – During the 1960’s, sometimes used white helmets on eligible receivers at night games or when helmets resembled opponents
1969 – Crimson helmets all year; football shaped 100 decal on side of helmets (100 years of college football)

A one year tribute

1971 – Wore white helmets in season opener against USC and later against Houston; last time white helmets used in game until 1983
1974 – No numbers on side of arms
1980 – January 1st Bowl Game was the first time players allowed to wear white shoes
1981 – Names on back of jerseys, Cotton Bowl Only
1983 – White helmets to go along with crimson helmets; No names on jerseys.

Nobody ever really liked the white helmets.

2009 – Special script “A” gloves used for the first time. There have been many new ones since.

2013 – Alabama adds a sticker to each helmet to honor past player, coach and athletic director Mal Moore.

2015 – Alabama players were a black circled “28” on their helmet in honor of Altee Tenpenny, a former player who died in a car accident.