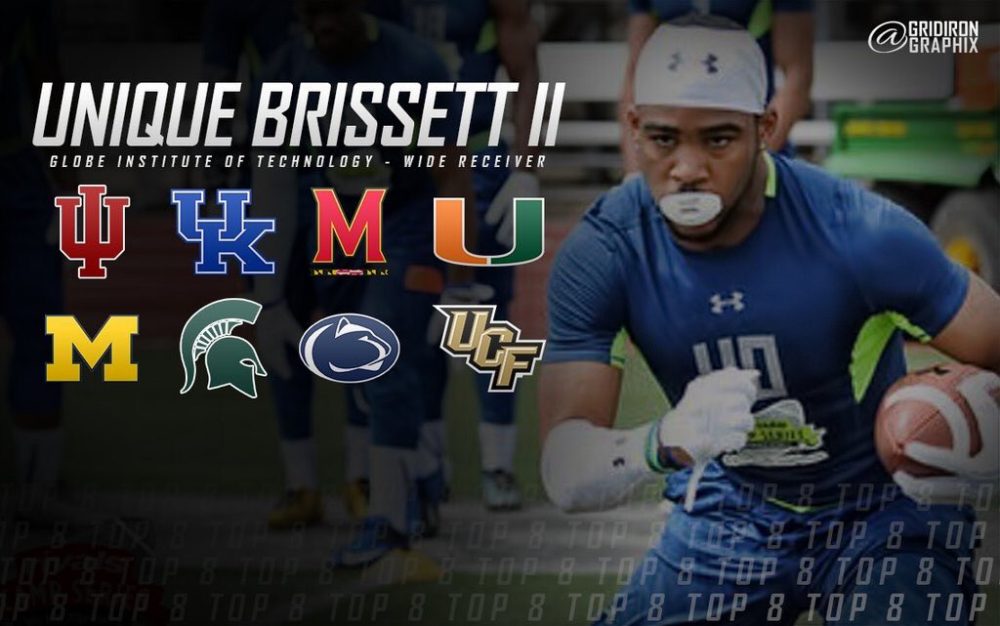 There are some things in sports that just make you scratch your head.

Like last year’s debacle in Canada where a man from Sudan, Johnathon Nicola, was caught impersonating a high school transfer student in order to play basketball at a Canadian high school. Nicola was actually a 30 year-old man posing as a 17 year-old 11th grader.

He was living with his coach who had even said that Nicola had a good chance of getting into the NBA.

This could not actually happen anywhere, else could it? This is the world of sports and Greg Paulus did play basketball for Duke where he played point guard, then turned around and was a starting quarterback for the Syracuse Orangemen. Yes, strange things do happen in sports, but people impersonating players? Surely that can’t happen in recruiting for collegiate football, can it?

Then there is the tale of a certain “JUCO receiver” who calls himself Unique Brissett II, who supposedly attended the Junior College called Globe Institute of Technology in New York. The school does in fact exist at least on the web, but when you click the link to the football program, it reads: “This page cannot be found.” Apparently, on Sunday he had given his top 8 schools that were recruiting him.  He put together a highlight reel of his talents that had some big time colleges looking at him. The University of Kentucky and “The U” University of Miami were among the leftover candidates for his commitment. He was supposed to visit the University of Michigan tomorrow.

Everything seemed legit and was, right?

Many outlets had already run stories on him, especially school specific news sources.  People were getting excited! Then came the incriminating tweets. He had supposedly taken a visit to Michigan State to take a look at the Spartan program and the school’s campus. The only problem was the pictures that he had supposedly taken of the facilities were exactly like pictures that had been taken by another recruit on the Spartan radar, Cody Carone.  Oh, but it gets weirder.

On what appears to be a message board called Inside the U, Andrew Ivins who is a key figure on the site, said that no one at the University of Miami had even heard of him and the Kentucky coaches have had zero contact with him. Oh yeah, and did I mention the school Globe Institute of Technology has closed its doors permanently and has been closed since 2016? Brissett’s twitter had been deleted, but it’s apparently resurfaced.

He has a link on his twitter account to a clothing store called “Carefree garments” that only has two shirts for sale at $35 a piece. Yeah ok, we are done here, right? No, it gets even weirder.

If you look up “Unique Brissett II” on Google, you get various football player profiles. One of the sites, Hudl, has Unique Brissett II in Lincoln, Neb., as late as last year. Yes last year, the same year that Globe had its curtain call as an institute of higher learning. The profile has one highlight and it is only 24 seconds long.  On his Facebook page, it says that he is currently attending Westchester Community College, has been attending since 2014, and is studying criminal justice. His “work” is listed as the NFL and his jobs include wide receiver, cornerback, and running back.

So what have we learned? It is simple really, even sports are not safe and cannot be saved from being tainted. What is going on these days with men posing to be young athletes is disturbing and it ruins it for the young men who have worked their entire lives to achieve just receiving an offer from a junior college or other smaller school. It spits in the face of the recruiting process in both sports and should be criminalized. If you can have charges pressed on you for identity theft, is it a stretch that you should be if you pretend to be someone else in order to play sports or get recruited? Where is the line drawn? What if this happens in droves? If high school athletics is going to get sullied like this, what are we to do?

All sports fans and us media members will have to hope and pray for the best and that this isn’t a sign of things to come. If not, this will slowly become a norm, young men will only suffer because of this, and prep sports will be compromised throughout the recruiting process.

Ty Pulliam is a recruiting analyst and contributing writer for Touchdown Alabama Magazine. You can follow him on twitter @TDAlabamamagTy