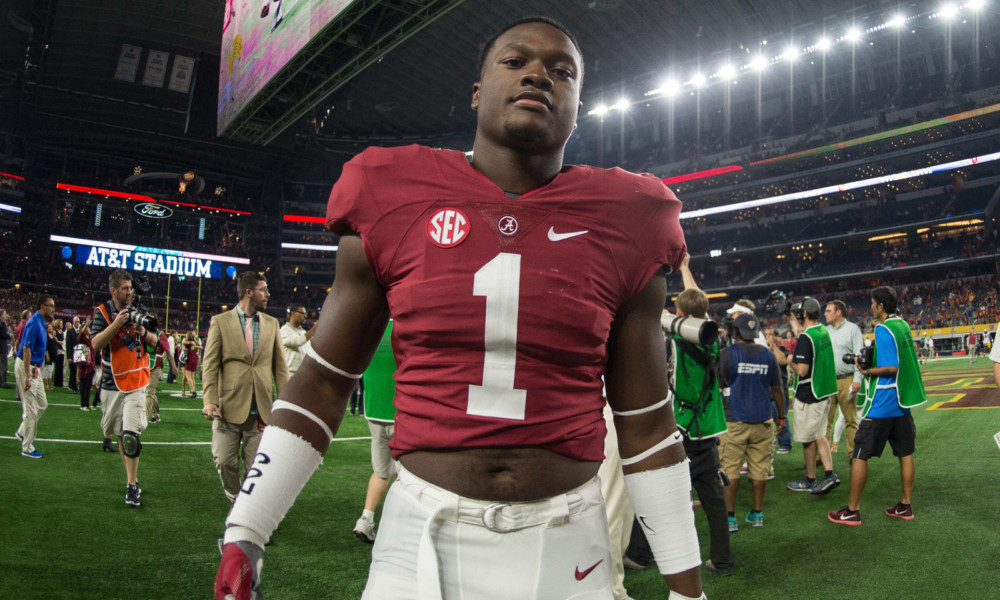 Not all five star players get starting jobs in their first year or two at Alabama, but that hardly makes them a bust when you consider the talent there ahead of them. This is one of those stories.

Ben Davis was supposed to be the next big thing. He was the number one prospect in the state of Alabama overall and as a linebacker. He was top 10 in the entire country and most thought with those kinds of credentials, he would have made a big impact by now. Instead, some are wondering if he’s going to be a bust. He was red-shirted as a freshman and starts his second season buried in the depth chart and seems to have been moved from outside to inside linebacker.

So what’s the real story here?

The story here is multi-layered as most are. While some of the five star, number one in the state rankings may have been a bit overdone, that could partly be because he played his high school football at Gordo High School and with no knock against that fine school, they are 3A and don’t play the best schools in the world and if you’re a great 3A player you look like a man against boys in most cases. You may not look that good right away playing against SEC talent and quite frankly, he didn’t, so he was redshirted to mature not only his 6’4”, 230 pound body a little more and learn the things he never got coached on in Gordo.

Secondly, he may have been fighting for a starting slot at lots of other schools this season had he gone elsewhere, but the linebacker slot was so packed when he arrived with NFL ready folks, that it just made good sense to redshirt him and now this year, the talent pool at that position is still so deep that again this year, he’s not likely to see the field a lot except on special team play and mop up duty.

And that doesn’t mean that you’re not a great athlete, especially at a school like Alabama. Tim Williams is a linebacker with a multi-million dollar NFL contract and he didn’t become a starting player until his senior year. While this was at times difficult for someone like Williams, he’s now in the NFL without 4 years of continuous beating on his knees and body and the end certainly justified the means in his case.

So before you pass judgement on Davis based on what you may hear from other fans, consider that not everyone who is great is going to start early in his career. As a reporter I can name lots of guys in the NFL that didn’t get but a year as a true starter. Eddie Lacy comes to mind too. Buried behind others who also signed NFL contracts, he was only the starting running back in his last season at Alabama and few would dare to call Lacy a bust or that he didn’t live up to expectations.

And dealing just with Alabama linebackers lately, not everyone was like a Dont’a Hightower who shined from the freshman year forward, let’s remember that it took Rashaan Evans, Reuben Foster and Reggie Ragland a while to wade through talent ahead of them, mature and learn the position too. Few would call them a bust.

The goal for Davis should be to consider keeping his nose to grindstone and work on getting better, practice like a starter and keep being noticed by the coaching staff for doing that keeping his chin up while waiting for his chance.

He’s playing behind more NFL talent this season and there’s certainly no shame for shining the bench for that reason. In fact, just this week at SEC Media Days, Saban said of Davis’ position, “I think inside linebacker is the one position that we probably have the most depth at, with Shaun Dion coming back, with Rashaan Evans finishing the season last year for Shaun Dion and playing very well.”

“Mack has had a really good summer. We have a lot of confidence in his ability. I think he’s starting to mature and develop the confidence and understanding in the system, to have a role, and be a good player for us. So we’re excited about him making a contribution, you know, at that position. And he’s so athletic, that maybe we could even develop him as a rusher because he is a very explosive guy.” Saban concluded.

Davis seems very set in his future and if fans of him are thinking that he may go elsewhere to get that playing time they think he deserves, then that’s not in the cards either. Ben is where he has always wanted to be, his family is solid behind that decision as well. After all, his father Wayne Davis played at Alabama from 1983-86 and still holds the school’s career mark in tackles with 327. He’s also doing well in school and with a redshirt year, will be more than set to leave Alabama with a degree, so it’s very unlikely that Davis will get frustrated and leave.

So while it still may be a little early to say he’ll also leave with an NFL contract, that could certainly be in the cards as it has been with so many other players who waited a while to finally get their chance to shine. So if you hear others say that the state’s number one prospect still can’t earn a starting job and must be a bust, now you know the real story.

While he may wait to make offensive linemen live a nightmare, guys on the punt and kickoff return teams will learn very quickly who this young man is and what he brings when he gets his chance and that will tell you all you really need to know. Keep your eye on him in those situations, you’re seeing a star in the making.