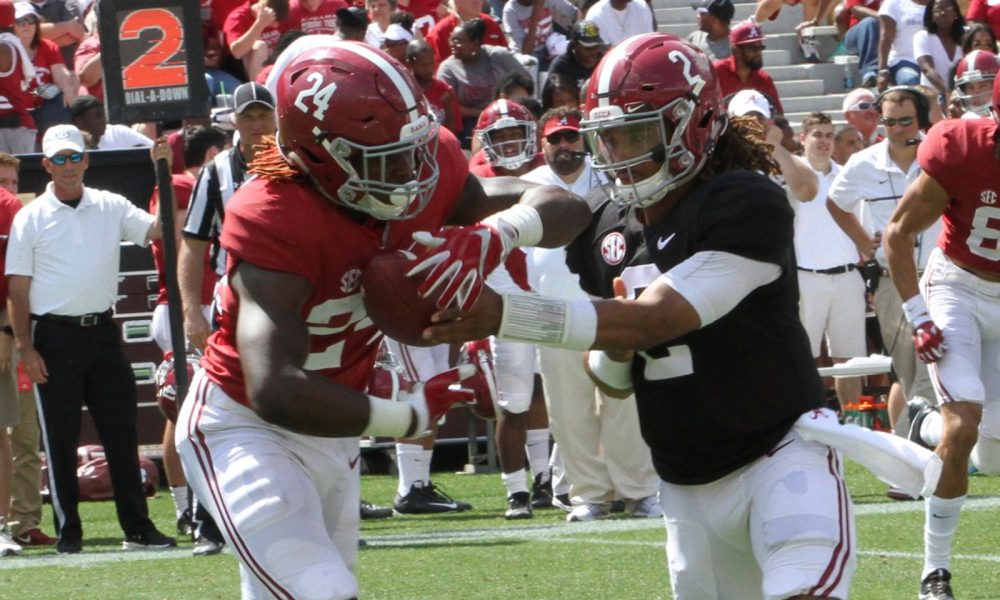 No parade was held last season for a Southeastern Conference school (seeing that a national championship was not obtained by the league), but Alabama head coach Nick Saban and the Crimson Tide look to avenge itself in the upcoming season and the work starts in fall practice.

Offensively, the Tide returns a stacked roster headlined by quarterback Jalen Hurts, running backs Damien Harris and Bo Scarbrough, and wide receiver Calvin Ridley. Aside from receivers, linebackers and talented players for its secondary, running back is the most recruited position for Alabama’s coaching staff. From Glenn Coffee to Derrick Henry, Saban and the Tide have boasted a primary rusher on its squad. Despite the baton changing hands in 2016, Harris finished with over 1,000 yards (1,037) and Scarbrough ended with 812 yards and 11 scores.

The trio of Harris, Scarbrough and sophomore Josh Jacobs is certainly enough to whet the taste buds of fans; however, there’s another rusher that could make an impact. Five-star freshman Najee Harris would appear to be the marquee player in question. He was only the top-rated overall prospect in the 2017 recruiting class via Rivals, Scout and PrepStar networks, yet the individual referred to in this article is a four-star athlete and a homegrown talent.

Brian Robinson loves competition. In fact, he loves it so much that despite the Tide having four backs already in place and Najee Harris coming in – he still chose to sign with Alabama.

Before graduating Hillcrest High School, Robinson was one of the top-10 players in the state of Alabama for the 2017 recruiting cycle and the state’s No. 1-rated rusher. With a vision, character and drive beyond his years, he guided the Patriots to two Class 6A semifinal playoff appearances during his junior and senior years in 2015 and 2016.

While in his senior season, the 6-foot-1, 213-pounder turned in 990 yards rushing with 18 touchdowns on 161 carries. His versatility out the backfield made Hillcrest all the more entertaining, as he grabbed 24 passes for 302 yards. With the team convening on Thomas Drew Field to start practice on Thursday, yours truly lays out three critical reasons why the Crimson Tide cannot afford to redshirt Robinson.

To be fair, B.J. Emmons wouldn’t have been in a position to have a strong impact.

However, the sight of him on the roster gives Alabama more of a reason to pin a redshirt on Robinson. Upon seeing the arrivals of Robinson and Najee Harris along with the hype surrounding Scarbrough, Damien Harris and Josh Jacobs, the four-star back from North Carolina decided to pack up and move elsewhere. Prior to his departure over the summer, Emmons recorded 35 carries for 173 yards and a touchdown through seven regular season games.

After losing Emmons and Derrick Gore (transfer), Nick Saban and running backs coach Burton Burns are forced to look at the future of this position group. Getting Robinson involved as much as possible is imperative for his development moving forward, especially after the 2017 season.

Speaking of things to happen in the upcoming football campaign, Damien Harris and Bo Scarbrough are draft-eligible juniors. Both guys are cleared to pursue the National Football League after this season; in fact, the duo could leave together if both turn in solid numbers.

The last time Alabama lost both its primary rushers was at the conclusion of the 2015 year – Derrick Henry and Kenyan Drake – and with the thought of losing Harris and Scarbrough, the Tide would be more so prone to get Robinson on the field and see his capabilities at work.

Saban’s backfield will drop to having three scholarship guys if Harris and Scarbrough leave, and despite four-star prospect Asa Martin being high on the Tide for its 2018 class, it’s still early in the recruiting game and he could be swayed elsewhere. Should this happen, Robinson now becomes a valued commodity and with some carries under his belt – he could be very special.

It’s the one part of the game that fans, coaches and player alike cannot stand; nevertheless, football is not what it is if injuries aren’t involved. As much as the Crimson Tide faithful want to see Bo Scarbrough remain healthy for a full season, he dealt with injuries since high school.

The fleeting image of him to end 2016 was the 235-pounder on the ground, following a broken leg versus Clemson the College Football Playoff National Championship. Regardless of talent, Robinson must play should any back on the roster sustains a serious medical issue. Although it could set back the individual in question, it will also propel Robinson in the eyes of the program.

In numerous conversations with Johnny Jackson, an alumnus of the University of Alabama and co-founder of Jackson-Duffy Performance Institute, he said Robinson possesses “a dog-like mentality” and is ready for the moment.

An unsung hero made itself known through Alabama’s four national championship seasons, and with its annual fan day on Saturday, people could witness the next superstar in Robinson. He had success gaining yardage against the Tide’s first-team defensive unit in its spring game.