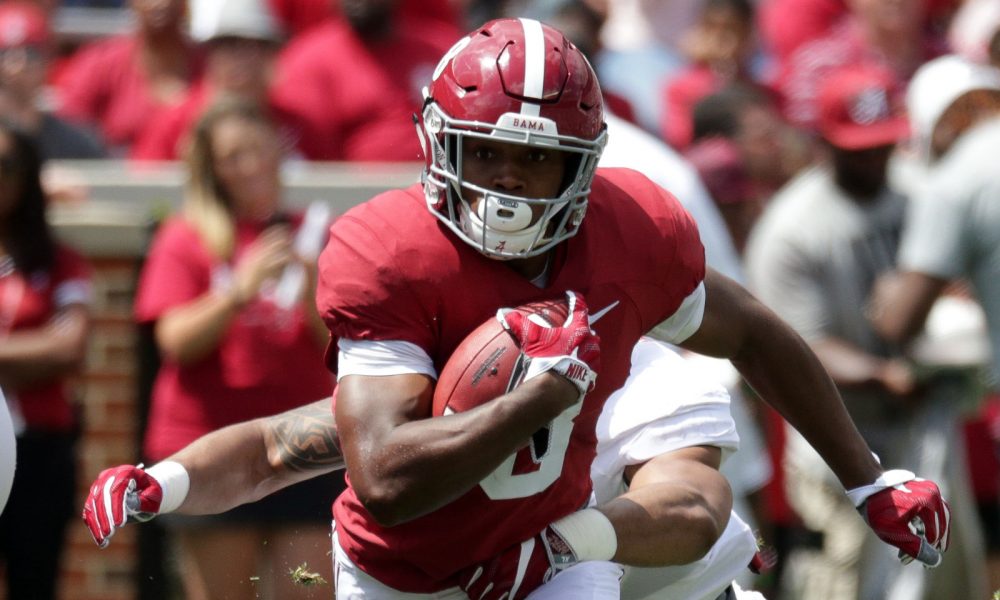 In this third installment of Crimson Spotlight, yours truly of Touchdown Alabama Magazine looks at a running back that came in under little to no expectations a season ago.

While Josh Jacobs has been dealing with a slight hamstring issue this week in fall practice, he was one of few unsung heroes in 2016 and one can expect Tide fans to be excited when he gets the ball.

It still baffles a lot of Alabama fans and media pundits alike to see how Jacobs’ highlight reel from McLain High School (Tulsa, Okla.) did not reach mainstream, until late in the 2016 recruiting process.

After a career that ended with over 5,000 rushing yards, Jacobs came to Tuscaloosa under the radar.

According to sources, four-star B.J. Emmons was heralded as the better prospect, but it soon became noted how special Jacobs was on offense.

Neither Kent State nor Kentucky expected a marquee outing from Alabama’s third string rusher; nevertheless, Jacobs torched programs – including a 100-yard performance versus the Wildcats.

He picked up Southeastern Conference Freshman of the Week honors for his contribution against Kentucky and earned Special Teams Player of the Week accolades from the Tide’s coaching staff, following the SEC championship game versus Florida. Jacobs a returned a blocked punt off the foot of Johnny Townsend for a 27-yard score, aiding Alabama to a 54-16 victory in Atlanta.

As a receiver, Jacobs was fifth on the team. He brought in 14 catches for 156 yards, with his best two games coming against Kentucky (3-44) and Mississippi State (3-34). Despite a contrast in size, there are quite a few similarities in the styles of Mark Ingram, Kenyan Drake and Jacobs.

Damien Harris and Bo Scarbrough return as juniors, but even with them and fresh energy between Najee Harris and Brian Robinson it will be hard keeping Jacobs bottled up.