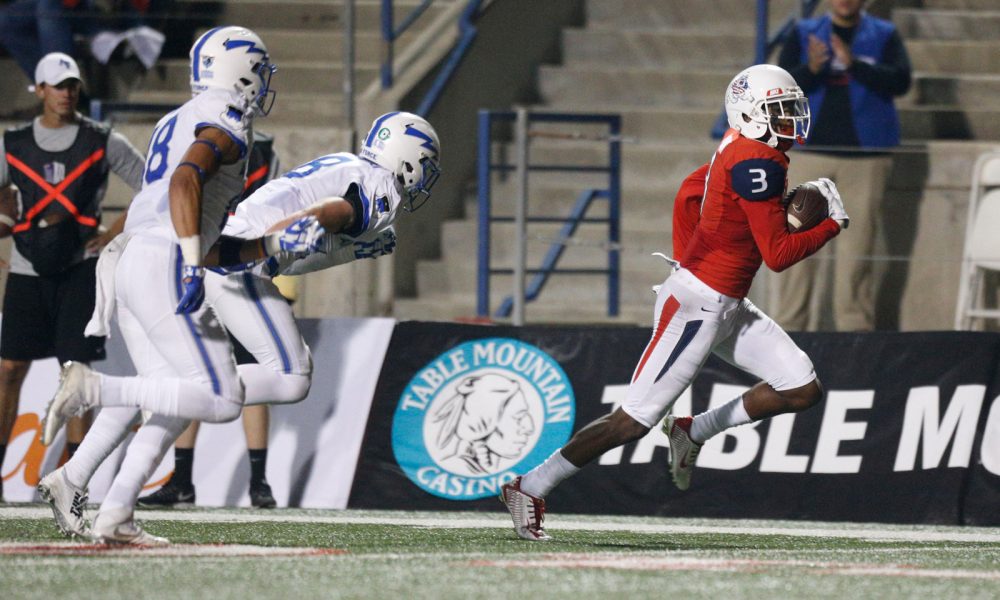 He’s back in California for a third stint at Fresno State, and this time it is at the head coaching position. Despite bouncing around the Canadian Football League and National Football League, Jeff Tedford has mostly been on the west coast.

The 55-year-old was an assistant at Oregon and Washington, while serving as offensive coordinator and quarterbacks coach for the Bulldogs.

He’s coached a lot of great players — including Aaron Rodgers, Marshawn Lynch and DeSean Jackson, unfortunately all of those names came during his time as the head man of the University of California, Berkley. After the success of brothers David and Derek Carr, Fresno State has struggled to be a consistent marquee competitor in the Mountain West Conference.

An average of 17.7 points on offense and a defense that allowed 30.9 points a contest led to the Bulldogs finishing at 1-11 in 2016. Although Tedford has been one of the better recruiters in college football, much patience will be needed in order to turn this program around.

Bryant-Denny Stadium in Tuscaloosa, Ala., will be the venue for this week’s matchup as the Crimson Tide opens its home schedule against Fresno State.

Yours truly of Touchdown Alabama Magazine now breaks down some of the impact stars that Tedford hopes can challenge the Tide.

If sophomore quarterback Chason Virgil wants to have success against Alabama’s secondary, he must find KeeSean Johnson early and often. At 6-foot-1 and 197 pounds, Johnson carries a strong route running prowess and was the team’s leading target last season with 66 catches for 773 receiving yards and six touchdowns. Going back to the Crimson Tide’s meeting against Western Kentucky from 2016, wide receiver Taywan Taylor generated a ton of huge plays.

Taylor caught nine passes for 121 yards versus Tide, and his performance led to him being selected in the third round of this year’s NFL Draft to the Tennessee Titans.

Johnson has the same skillset.

Affecting a physical offensive line like Alabama’s is no small task, but James Bailey cannot avoid preparing for it.

He filled up the stats sheet pretty well at outside linebacker a year ago, posting 59 tackles, five tackles for loss and four pass breakups.

Limiting a rushing attack that’s headlined by Damien Harris and Bo Scarbrough is crucial for Fresno State, especially after the group surrendered 247.4 yards per game. Even with the amount of running the Crimson Tide wants to do, Bailey’s primary job will be to frustrate Jalen Hurts.

Following what most called a subpar effort in the passing game against Florida State, Hurts expects to bounce and use the next two weeks to fine-tune everything. Create a few sacks and maybe a turnover or two would be ideal for Bailey and Bulldogs.

He has his work cut out for him.

In his third season as a starter at left guard, Aaron Mitchell is the lone consistent player on Fresno State’s offensive line. He will have to lead a sophomore, redshirt freshman, a walk-on and a senior (making first start) into Bryant-Denny Stadium for a battle against Alabama.

Mitchell, who was penalized three times in 2016, anchors a unit that was 18th in fewest penalties among the college football ranks. He blocked for the team’s 1,000-yard rushing campaign two years ago, and a near 1,000-yard rushing outing from running back Marteze Waller (920).

After recording three tackles for loss, two sacks and a forced fumble last week, the junior college transfer will face the Crimson Tide’s offensive front on Saturday. Before committing to Fresno State, Emeka Ndoh was rated the ninth-best JUCO prospect nationally and 18th-best JUCO strong-side defensive end according to 247Sports. He chimed in with 36 total tackles, including 11 stops for loss and seven sacks during his sophomore season at De Anza College in California.

While he lacks elite size for defensive end (6-0/252), Ndoh’s quickness off the ball will test the athletic abilities of either Jonah Williams at left tackle or Matt Womack at right tackle.

Jamire Jordan returns to the Bulldogs’ roster as a junior, much like Johnson.

Jordan, who’s 5-foot-10 and 173 pounds, finished second in receiving a year ago with 45 catches for 713 receiving yards and two touchdowns. He’s a skilled playmaker that will challenge defensive backs, should he create separation off the line of scrimmage.

Jordan can line up as a vertical deep threat or in the slot, but it all goes back to the offensive line giving Chason Virgil enough time to locate him downfield.

Both Jordan and Johnson are solid weapons outside, so this gives Alabama’s secondary some work before SEC competition arrives.