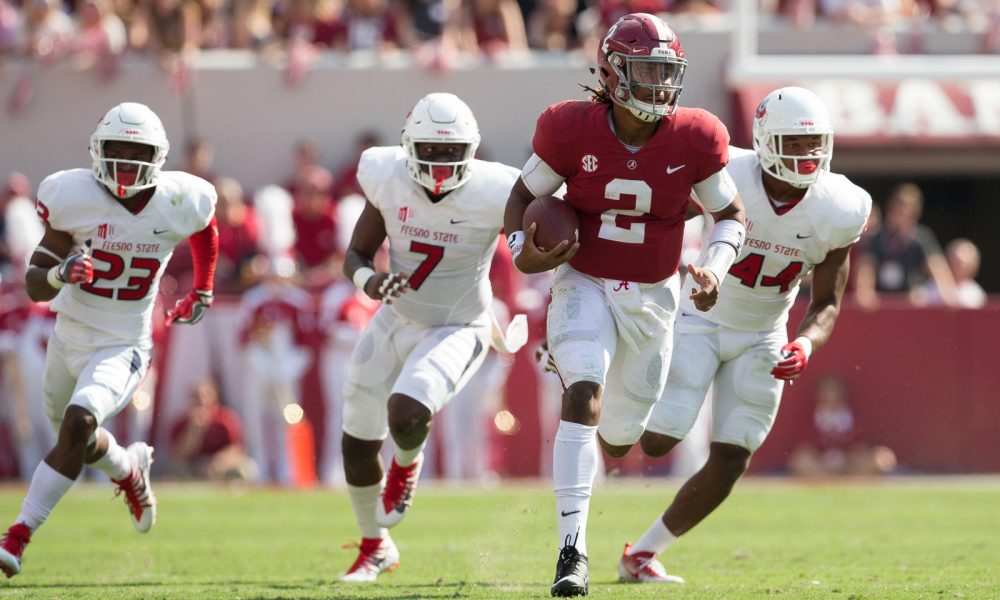 TUSCALOOSA, Ala.– Alabama head coach Nick Saban may not let his players read the media clippings or hear the critiques made about them via the press, but Jalen Hurts has known all offseason on the one thing he had to improve upon in order to be a complete player.

His response after a sub 100-yard passing game versus Florida State was totaling nearly 300 yards offensively on Saturday in the Crimson Tide’s home opener against Fresno State.

In the aerial attack, Hurts did a much better job of working through progressions and looking off defensive backs. He completed 14 of 18 attempts – 77.8 percent – for 128 passing yards, including a 23-yard touchdown strike to tight end Hale Hentges in the first quarter.

Sophomore Irv Smith Jr. was the primary target on the play; however, Hurts took his eyes and found a wide open Hentges streaking down the middle for the score.

Despite a lot of Tide fans not wanting him to run as much, the sophomore’s athletic abilities keep defenses off balance.

While his 55-yard run punch the Bulldogs in the mouth early, Hurts would continue to turn in chunk yardage plays.

He averaged 15.4 yards per carry and 154 yards rushing on 10 attempts with two scores, making it the fifth time in his career that he’s totaled 100 yards rushing.

At the conclusion of a 41-10 win, Hurts accounted for 282 of Alabama’s 497 yards. Coach Saban said the consistency was on offense was ‘a lot better,’ but he took his time in praising Hurts.

“He threw the ball in the right place,” Saban said on Hurts.

“He was accurate with the ball and kind of took what the defense gave him. His passing efficiency was a lot better. I was pleased with how he managed the game.”

As for his desire to make plays with his legs, Saban has no issues with Hurts running the football. He told reporters that the native Texan has always been good at explosive plays.

“He made a bunch of those types of plays last year,” Saban said. “He had quite a few runs today that were very effective, but he was also efficient throwing the ball. A combination of both will make us better.”

With the offense showing some improvement and the Crimson Tide not shouldering another injury, Hurts and company will return to practice next week and prepare for Colorado State.