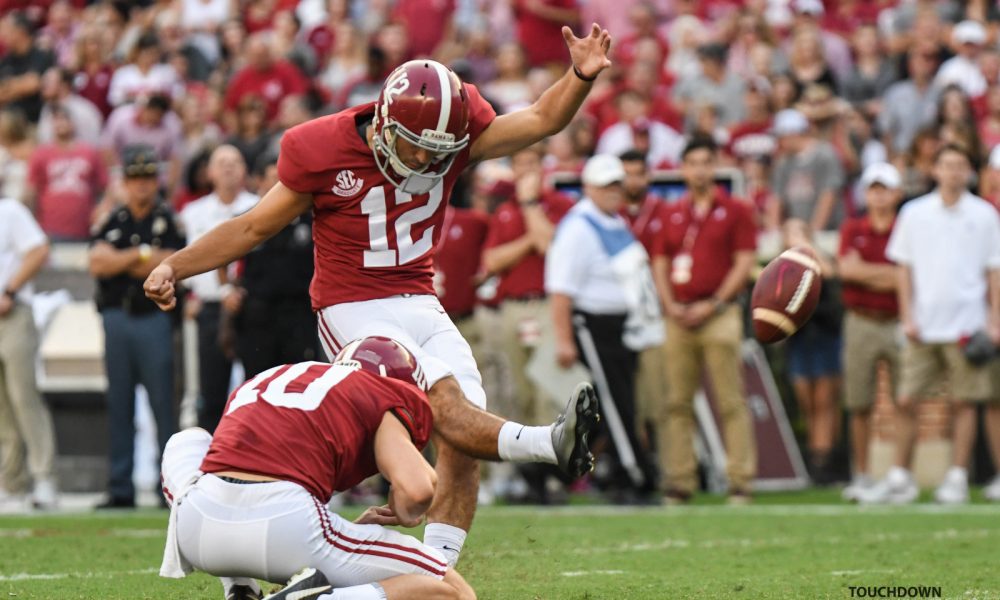 Alabama football ended its first stretch of home games this season with victories over Fresno State and Colorado State, despite both coming with problems in certain areas of execution.

Since its victory over Florida State, the Crimson Tide’s defense has failed to consistently affect opposing quarterbacks. Assistant coach Jeremy Pruitt (defensive coordinator) witnessed his group create one sack against the Bulldogs, while Nick Stevens kept a clean uniform.

With Vanderbilt growing in confidence, Saturday’s meeting in Nashville, Tenn., shall be an interesting challenge for the Tide in front of a sellout crowd. Getting Rashaan Evans back is pivotal for Alabama, regardless of how much the offense is improving under Brian Daboll.

Upon the end of a 41-23 win over the Rams, yours truly of Touchdown Alabama Magazine learned three things about this year’s team and what needs to be corrected moving forward.

Whether he’s effective in throwing or running, let Jalen Hurts be himself.

No matter how weak the competition was on paper in the last two games, as Alabama’s starting quarterback it is his job to improve each time he gets a chance. He was exceptional versus Fresno State – accounting for 282 yards offensively with three touchdowns and turned in 351 total yards against Colorado State with three scores (two passing) on a 70.6 percent completion percentage.

Hurts is finding ways to get different guys involved in the passing game, including a 52-yard catch and race to the end zone for senior Robert Foster. He enters the Tide’s Southeastern Conference schedule averaging 157.3 passing yards and 104 rushing yards a game.

After being concerned in the spring and following the matchup with the Seminoles, placekicker Andy Pappanastos has quickly started to gain confidence.

He’s now seven of nine on field goal attempts – including a string of five made tries. Hailing from Montgomery, Ala., the transfer from Ole Miss nailed two kicks from 40-plus yards in Alabama’s 41-23 win over CSU.

Before the game, the ideal thought via rumors was Pappanastos did not feel comfortable with kicks in the 40-yard range. His ability to connect on two last week states that he has the leg.

“It’s important to me to treat long range field goals like an extra point,” Pappanastos said. “The distance should not play too much of a factor, but when the offense gets down there they do such a good job being efficient and getting into field goal position. I just need to finish off the drive.”

While it gave up nearly 400 yards (391) to Colorado State, the two most telling signs for Alabama’s defense was third down efficiency and red zone defense. Nick Steven and the Rams converted 10 of 17 third downs (58.8%), and scored on all four of its red zone opportunities.

The inability to finish drives and get off the field allowed two touchdowns for Colorado State in the fourth quarter. Having multiple alpha male voices in the locker room was one of the reasons why the Crimson Tide was so dominant in the previous two seasons.

Reuben Foster, Ryan Anderson and Tim Williams all did much talking, whether it was getting everyone on the same page or correcting mistakes. The departure of this trio to the National Football League left the Tide with Da’Shawn Hand, Shaun Dion Hamilton and Da’Ron Payne.

All three guys are good players; however, they don’t talk.

Rashaan Evans is the closest thing to Foster that Alabama has. He’s a sound player on the field, and an intense communicator when the team needs it. Having players lost to injuries will cause some problems, but it should not create missed tackles and an obvious lack of a pass rush.

Keep all eyes on Anfernee Jennings possibly returning too; nevertheless, Alabama can probably go another week without Jennings. This defensive front can’t afford another snap without Evans.