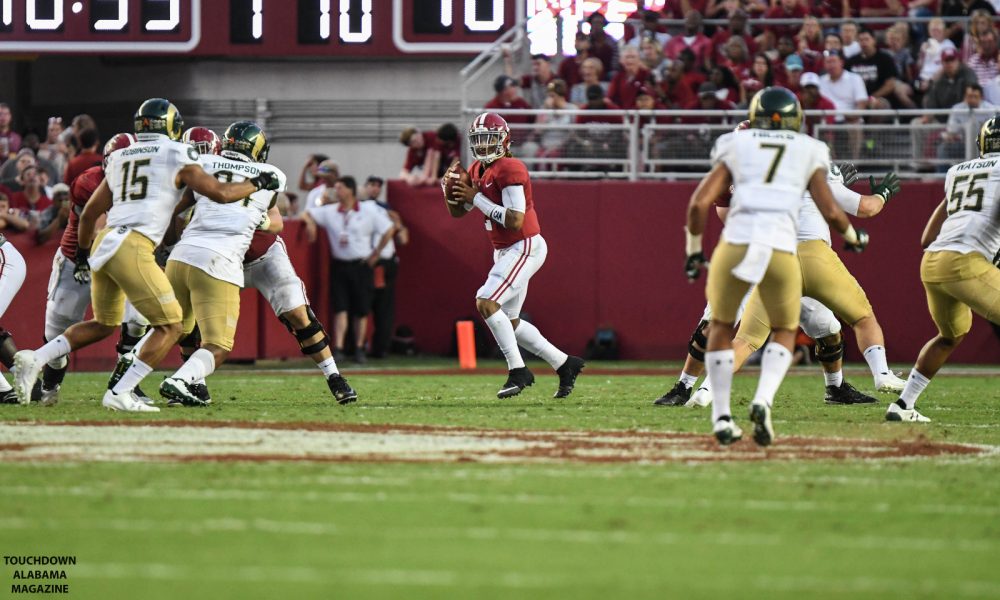 Efficiency flowed through Jalen Hurts’ game as a passer during the last two weeks, as he was able to connect with open receivers in matchups versus Fresno State and Colorado State.

After executing his touchdown celebration against the Rams and providing one Tuscaloosa News reporter with a savvy response to her question, the sophomore quarterback now prepares to silence more critics when it comes to being effective through the air on solid defenses.

When Jalen Hurts was asked about Vanderbilt's video saying "Bama you're next": "I mean theoretically, we are next"

While it doesn’t appear to be scary on paper, Vanderbilt University enters this week’s contest undefeated at 3-0 and has a defense under head coach Derek Mason that has been sound.

Regardless of Kansas State being its lone major opponent thus far, the Commodores are first in the nation in scoring defense (4.3 ppg), total defense (198.3 ypg), red zone defense (25 percent, touchdowns) and third down defense (14.3%). With Mason handling the play calling on that side of the ball, Vanderbilt is plus four in the turnover margin – five takeaways, one giveaway.

Junior linebacker Charles Wright anchors the defensive front seven with hybrid linebacker/safety, Oren Burks. Wright leads the team in tackles for loss (seven) and sacks (six), while Burks is one of the leaders in total tackles (16) and has one of Vandy’s five interceptions.

Prior to his last two games, Hurts has struggled to work through reads.

In meetings with LSU, Florida, Washington, Clemson and Florida State (this season), he completed 50 percent of his throws – 51 of 102 – for an average of 106 passing yards with three touchdowns to one interception. Having a 74.3 completion rating is great against Fresno State and Colorado State, but who are those schools in comparison to Alabama?

Should he turn in stellar numbers on Saturday, the concerns of him as a complete quarterback will start to really die down. He’s been able to get multiple weapons involved on offense in the Crimson Tide’s two home games; however, it is a must for him to continue this on the road.

During his interview on The Wake Up Zone via 104.5 WGFX-FM in Nashville, Mason said it will be a challenge to face Alabama but he also said that “he’s got something for the Tide.”

Hurts and company look to begin its conference slate 1-0.