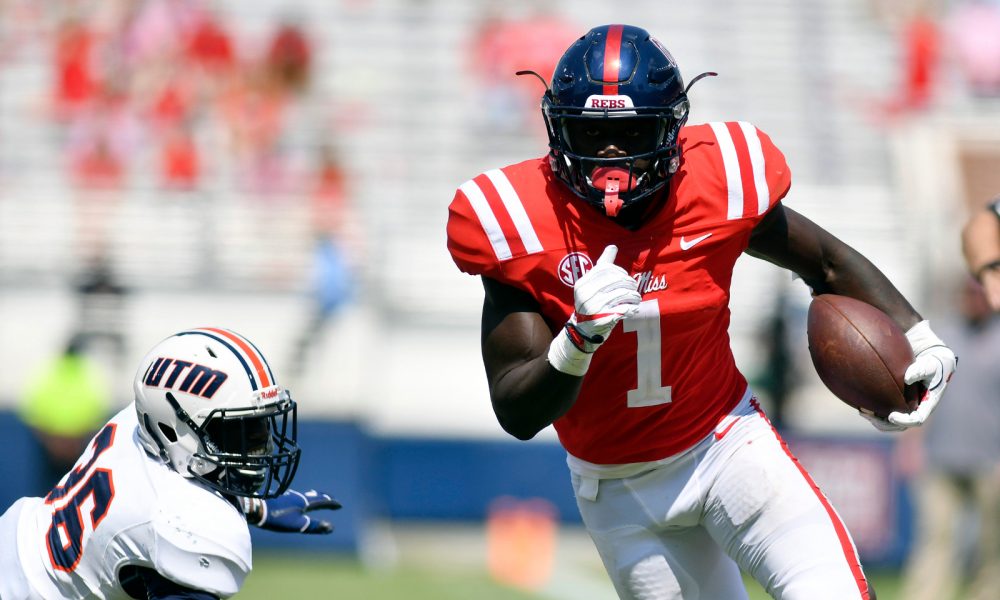 A slew of talented receivers have journeyed through Oxford, Miss., but sophomore A.J. Brown provides more than hands and speed at the position for the Ole Miss Rebels offense.

Brown, a four-star recruit from Starkville, Miss., has a chemistry with quarterback Shea Patterson that no one else on this year’s team has obtained.

Even after seeing a trio of weapons – D.K. Metcalf, DeMarkus Lodge and Van Jefferson – excel in the loss to California, having Brown leave with a strained MCL hurt the Rebels down the stretch and affected Patterson.

Rumors of him possibly not playing this week stirred Land Shark nation into fear, but according to Evelyn Van Pelt of the Rebel Walk, Brown has practiced this week and should be good to go.

“Brown is a matchup nightmare in the slot for most teams,” Pelt said during her interview on today’s airing of The Way It Is via Fox Sports Shoals (97.9 FM). “Having him back for this game would mean a lot to Shea Patterson because it gives him more of a comfort level with Brown.”

Standing at 6-foot-1 and 225 pounds, Brown has the body type that typically supplies Alabama’s secondary with a lot of issues. His brand of size, speed, route running and solid hands (whether in the slot or on the perimeter) should provide Patterson with a consistent option downfield.

Through three games, he leads the team in receptions (16) and receiving yards (389) while sharing the lead in touchdown receptions with four.

As much as one would rather be at full strength against the Crimson Tide, not having Brown on the field to frustrate this defense puts Ole Miss at a disadvantage. Expect the playmaking sophomore to take on Bryant-Denny Stadium on Saturday in hopes in pulling an upset.