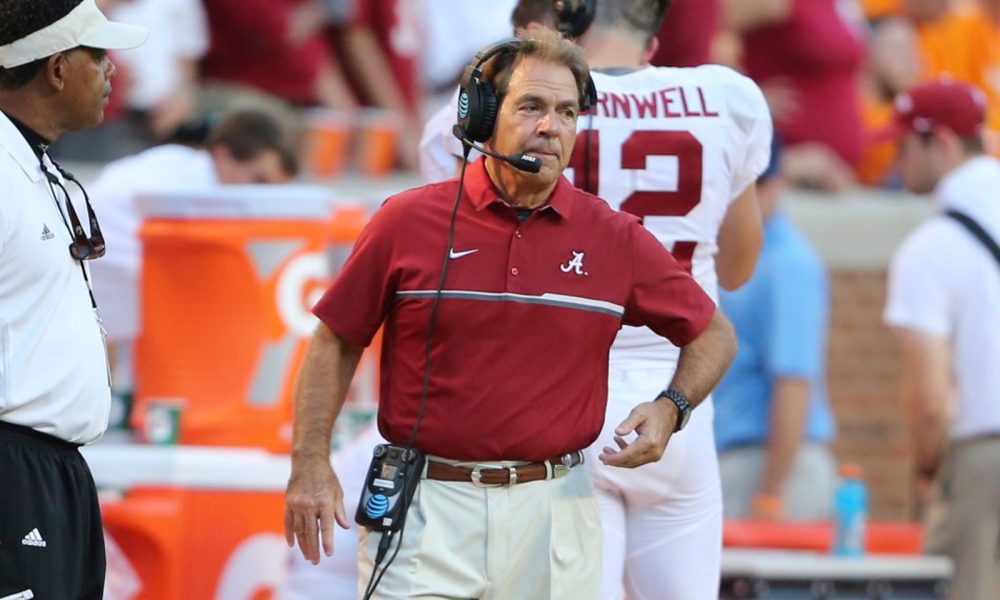 Here’s the article that Nick Saban wants to read. See what you think about it.

Nick Saban has said that today’s writers feed his team rat poison by feeding them stories of just how good they are and that’s not helping him see their faults. So Nick, this one’s for you.

Aight, let’s just say what really needs to be said. This team isn’t close to where it needs to be to a national contender. Their third down conversion rate is abysmal, one of worst in the country of all ranked teams, hell, they’re not even in the top 50 in converting downs. It’s almost a laughing matter if you think that kind of thing is funny.

And what’s this talk about us having a great punter? Yeah he’s fantastic, his punting yardage has him ahead of three people right now. Yes, that’s right, we outright stink up the nation coming in at number 126 in the nation in punting. And while we’re on special teams, can you throw in the field goal unit here? At number 73, we sure as hell don’t have the confidence in sending out a kicker for a game winning kick.

And while we’re talking confidence here, quit asking why Alabama’s running Hurts so much. With that offensive line, he has to run, for his life that is. We have offensive lineman doing bullfighting blocks. That means they step aside as the approaching defensive opponent runs past them. Ole!

And even if they manage to open a hole for the running game, we only have one runner who can find it. The rest just run into the pile and push.

That leaves our quarterback who can throw it a mile, just not in the right direction or near the receiver though. And if if by some miracle he does get it to the receiver, they’ll drop it. Our passing offense is a joke coming in at number 101 this week. Hell, not even the top 100 out of 126 teams. Can you say pitiful, because you sure as hell can see it every Saturday.

Then there’s our defense that gives up one big play after another. I don’t know if they’re trying to tackle folks or square dance with them after watching all those attempted arm tackles. But you other folks in the media thinks everything’s fine. Aight, if it’s fine, how does a team like Colorado Freaking State hang 23 points on them and run up almost 400 yards of offense?

And in the defensive backfield the motto seems to be if you can’t cover them, just draw a pass interference penalty. And speaking of penalties, remember when this used to be a disciplined team that lead the nation in fewest penalties? Now they’re rated 27th and falling further every week.

But why should the players care about such things when the fans aren’t sticking around to end of the game and doing their part. These fans are just the worst. They leave early if you’re winning by too much and not showing up if there’s a cloud in the sky.

I’ll be honest with you, the folks who picked Alabama 29 points over Arkansas this weekend aren’t seeing what I’m seeing. They way they’re executing Alabama will be lucky to come out with just a win.

Now if this doesn’t get me a dinner invitation to Nick and Terry’s home, I don’t know what will.