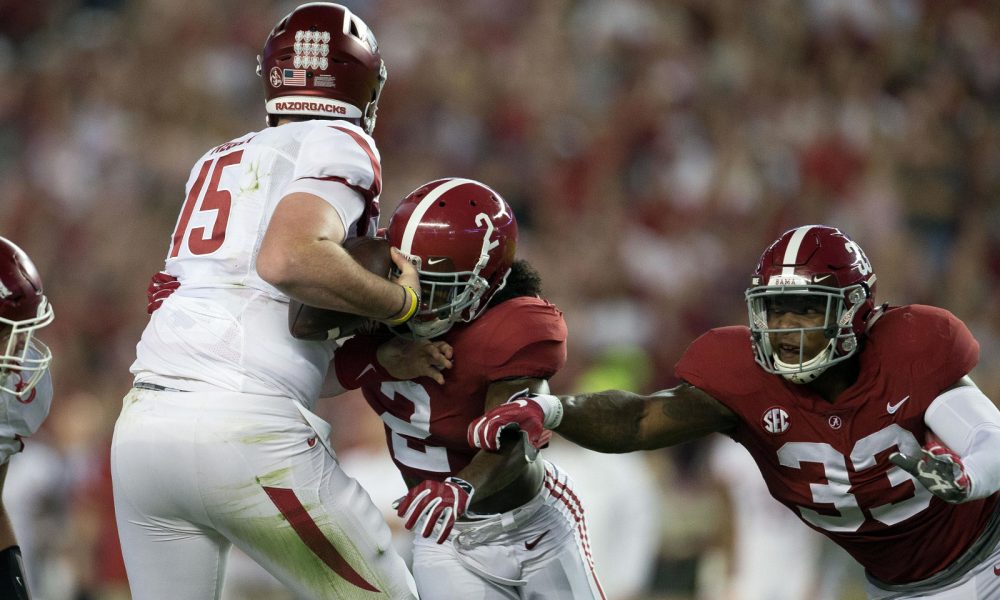 Aside from maybe former Alabama running back Derrick Henry, Brown’s workout routine is both eccentric and productive. Last season, defensive end Jonathan Allen compared the senior’s physicality to a defensive lineman and despite not getting as much field time since his freshman year in 2014, the once five-star prospect may receive a final opportunity to exit on a high note.

In talking about defensive backs, Brown has all the tools.

He possesses the size – 6-foot, 198 pounds – speed, ball skills, tackling prowess and knowledge of the system to probably be the most feared player in school history. What’s hindered Brown from reaching his potential in the eyes of coaches and teammates is attitude and lack of focus.

While it would take a moment to thumb through all the off-field issues he’s endured, the Beaumont, Texas native truly desires to be successful; he just does not know how.

He started to find himself during the latter portion of 2016, as he recorded two interceptions – including one against Florida in the Southeastern Conference title game. No one has the reason as to how Levi Wallace rose to be a starter over Brown this season; nevertheless, one should admire the fact that he wants to have his career end in the same manner as Kenyan Drake.

Drake, like Brown, did not immediately buy in upon arriving at Alabama.

He spent some of 2012 and 2013 inside Nick Saban’s doghouse for personal reasons, though, he provided a higher yard per carry average than T.J. Yeldon. When he came to grips with himself, Drake would experience multiple setbacks. A horrific leg injury in Alabama’s road game versus Mississippi three years ago almost ended his career. One break. Many tears. Much frustration.

The agony Drake went through was real, because it came from a place of confusion where one may think that if he was able to give over to Saban’s way of doing things, then nothing horrendous should come from it. After working to get back, he suffered a shoulder injury but somehow kept a positive outlook. Through it all, Tide fans witnessed a personal favorite and game-changing talent reintroduce himself in the College Football Playoff.

Ever the fighter, Drake’s tenure ended in triumph. His 95-yard kick return touchdown versus Clemson in the CFP national title game was one of the most memorable moments. It propelled the Tide to a 45-40 win, and helped Drake secure the draft status of a third-round selection.

Hope still remains for Brown in terms of concluding things well at Alabama and obtaining a professional football career, but he must firmly lock in.

Saban’s challenge to his most intense player is simple; be consistent in your performance and do not lose sight on what’s important.

“When Tony can stay focused on what he’s supposed to do, do the right things, make good choices and decisions and what he does and stay focused on it, he can be a very effective player,” Saban said.

While Minkah Fitzpatrick (hamstring) has practiced all week, the Crimson Tide’s coaching staff might just to play him at different points versus Mississippi State.

Following his efforts against Louisiana State University, Saban said that Brown ‘wants to be successful.’

“He’s probably going to get more opportunities in the future to play,” he said.

“I’m hopeful that we’re going to spend every bit of time that we can with him to try to do things the way he needs to do them so that he can be successful. We just have to help him do it.”

Three reasons not to be overly concerned with Alabama’s injuries at linebacker
Three takeaways from Alabama’s performance against Mercer
To Top
%d bloggers like this: