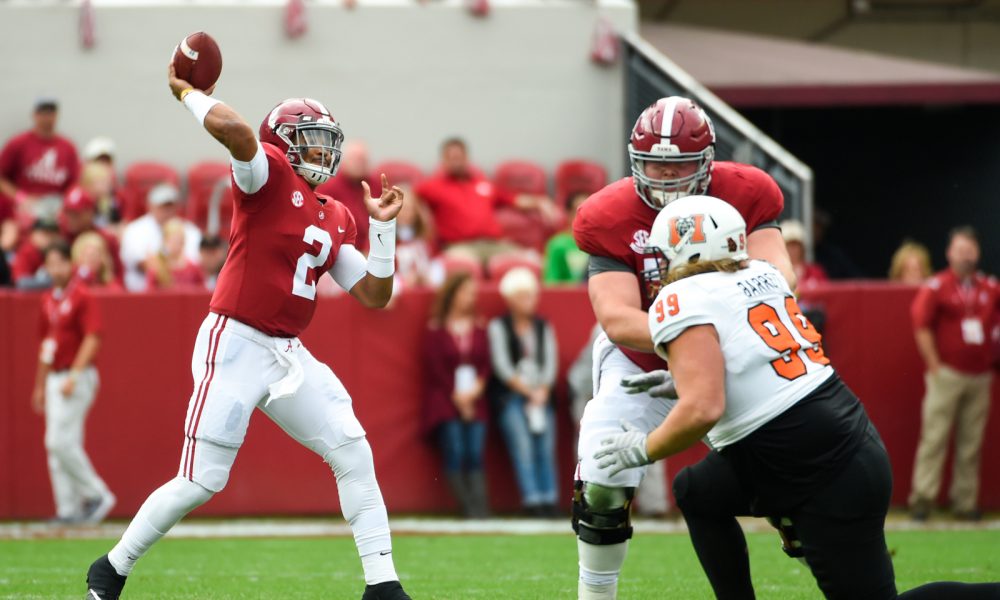 If someone was to have told Nick Saban that he could rest Minkah Fitzpatrick and Ross Pierschbacher and still shut Mercer off the scoreboard, he would’ve taken those odds.

The ideal thing of playing to a standard happened for Alabama at Bryant-Denny Stadium as the Crimson Tide avoided injuries, while achieving balance on offense.

Defensively, Jeremy Pruitt’s bunch held the Bears to nine first downs, 161 total yards and five third down conversions on 16 attempts. Seven of the Tide’s eight scores came in the red zone, including 28 of 35 points in the first half, which came upon it reaching Mercer’s 20-yard line.

It is understanding to note Alabama scored 56 points on an FCS opponent, but watching it maintain focus and execute assignments is good preparation heading into next week.

Seeing a head coach hold back tears from talking on his senior class is touching; however, reflecting on details as to why this game was a success is more important.

Listed below are three takeaways from the Tide’s performance versus Mercer.

Sophomore quarterback Jalen Hurts was taken out of the game, following his perfect completion percentage, perfect quarterback rating and strong passer rating in the first quarter.

He hit on all seven of his throws for 180 yards with three touchdowns – including a 66-yard strike to receiver Calvin Ridley on the team’s third offensive possession.

Hurts’ three scores tied him with former Alabama quarterback John Parker Wilson (58) for second all-time in touchdowns responsible for in his career. Upon filling in for the native Texan, freshman Tua Tagovailoa was credited with three scores – giving the Tide a school record in having a pair of signal callers account for three touchdown passes in a game.

Junior running back Bo Scarbrough showed signs of what he was able to do last season, in ripping off chunk yardage plays between the tackles. He led the squad with 54 yards rushing on five carries, especially a long run of 44 yards as he was dragged down in the red zone.

Brian Robinson Jr. and Josh Jacobs made their presence felt too.

Robinson, a Tuscaloosa native, totaled 50 rushing yards with a score on seven carries, while Jacobs touched the ball eight times for 86 yards (41 rushing, 45 receiving) and a touchdown.

Along with Ridley running free in Mercer’s secondary, both Cam Sims and Derek Kief brought in touchdown receptions. For Sims, his 8-yard grab at the back of the end zone was his first score of the season and first since his freshman year in 2014 in a meeting against Western Carolina.

Kief, on the other hand, hauled in his first-ever touchdown pass for the Tide.

He’s young, but Dylan Moses can be trusted.

Fans watched the five-star freshman direct traffic at inside linebacker and had his nose in on a multitude of tackles. Continuing to grow in the playbook will be important, but as for his size, speed and upside, Moses has the potential to be another force in this program.

He racked up a game-high 11 total tackles in his first start.

The Baton Rouge, La., native would also chime in four tackles for loss and one of three interceptions off Bears’ quarterback Kaelan Riley.

Saban praised Moses for his confidence all week in practice and his understanding for assignments coming together.

Excluding a pulled hamstring from Andy Pappanastos (practice) and Ronnie Harrison being shaken up after a play, the Tide emerged from the contest with no significant injuries.

The coaching staff is patiently waiting the reports on linebackers Christian Miller (biceps) and Terrell Lewis (elbow) from the medical staff, in hopes that the Tide can at least get one of the two for the Iron Bowl. Should it defeat Auburn, Alabama could get Lewis and Mack Wilson (foot) back for the Southeastern Conference Championship Game versus Georgia in Atlanta.