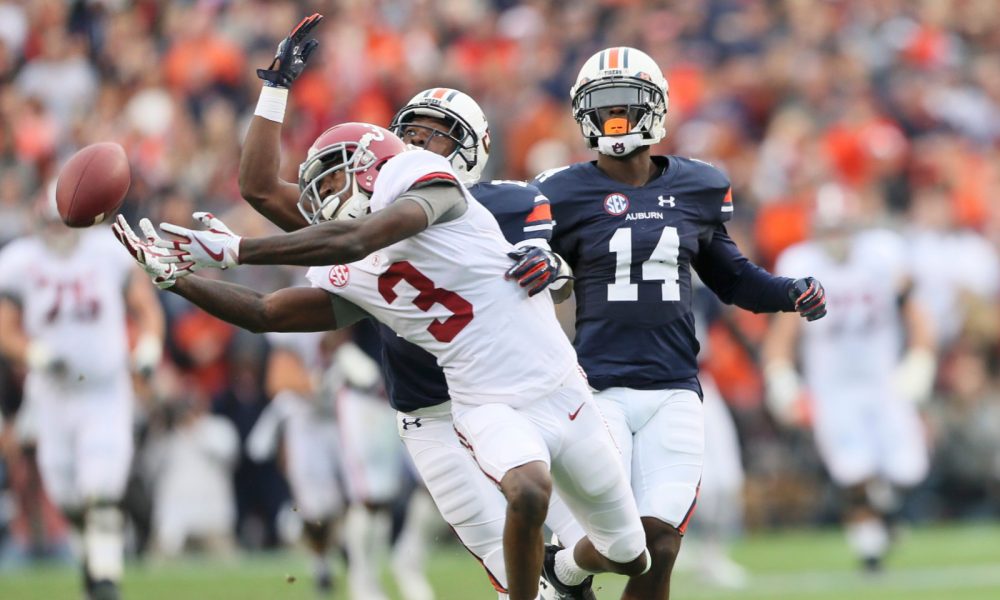 Despite opinions of how Gus Malzahn runs the show at Auburn, he joins a list of very few coaches that have defeated a Nick Saban-coached Alabama team more than once.

For the first time since 2013, the Iron Bowl featured high stakes in both Southeastern Conference and College Football Playoff picture. Behind Jarrett Stidham, Kerryon Johnson and an elite front seven on defense, the Tigers knocked off the top-ranked Tide, 26-14 at Jordan-Hare Stadium.

Whether the choice to direct anger goes toward the referees, Jalen Hurts, miss communication (Tide’s offensive line) or a botched hold on a field goal, there was more to the loss for the Alabama than the blatantly obvious issues that were seen up close. As fans continue to ponder over what just occurred, listed below are three reasons that caused a difficult setback against the Tigers.

This loss lies squarely on the shoulders of Brian Daboll.

While it appears to finesse Auburn, the best way to neutralize a pass rush is running the football at it. Seeing the combination of Damien Harris, Josh Jacobs and Bo Scarbrough have a total of 18 carries is inexcusable.

Jalen Hurts is highly athletic, but the Crimson Tide did not sign all three backs listed plus more for decoration.

One possession in the third quarter was the lone situation where it looked like Alabama went back to last season’s CFP semifinal game against Washington.

It totaled 79 yards on five plays – four runs, one pass – and ended on a 21-yard touchdown run from Scarbrough.

Hurts was not struggling early on; nevertheless, he becomes all the more enhanced when the running backs are seeing consistent touches.

The first-year coordinator has had some moments where he’s been excellent, however, Daboll didn’t bring his A game this week.

Give Auburn’s defensive front much credit.

Even veteran guys like Bradley Bozeman, Jonah Williams and Ross Pierschbacher, the Tide could not handle Deshaun Davis, Tre’ Williams, Dontavius Russell and others. For much of the game, Hurts was evading pressure and had to revert to chunking the ball out of bounds.

Regardless of posting two sacks, the Tigers accounted for nine quarterback hurries – making Hurts uncomfortable in trying to work through decisions.

It would get to a point where serious miss communication between Bozeman, Hurts and Scarbrough led to a pair of terrible snaps.

Third downs have been Alabama’s kryptonite all season.

It has struggled to move the chains offensively, while not being able to stop opponents and get off the field on defense. A number of pressures from Jeremy Pruitt allowed for Jarrett Stidham to find open players on crossing routes for first downs. Stidham converted five third downs, and while Kerryon Johnson became the second back to total 100 yards on Alabama (Jordan Wilkins, Ole Miss, 101 yards), his touchdown pass to Nate Craig-Myers came on third down.

Auburn was nine of 18, which allowed it total 408 yards. The Tide, on the other hand, finished three of 11 in this category.

Scarbrough, Robert Foster and Calvin Ridley each had opportunities to move the chains, but neither of the three could finish plays. This is the second time that lack of consistency on third downs has affected both parties, dating back to the CFP national title game.

Where it now stands

Alabama now is at the mercy of the CFP committee.

This is the self-same group of people that have argued back-and-forth on the Tide’s less than stellar schedule, regardless of it defeating teams to this point.

Of course, Saban has seen the pendulum swing in his favor before. In the aftermath of a 9-6 loss to LSU in 2011, quite a few teams fell after Alabama – setting the Tide up with a rematch against the Tigers in the 2012 BCS national title game.

Computers handled the generosity then, and though it would still need a loss from Wisconsin (Big Ten title game) and Miami (ACC title game), the committee has the final say on Alabama’s fate in the playoffs.

The new rankings will be released on next Tuesday.