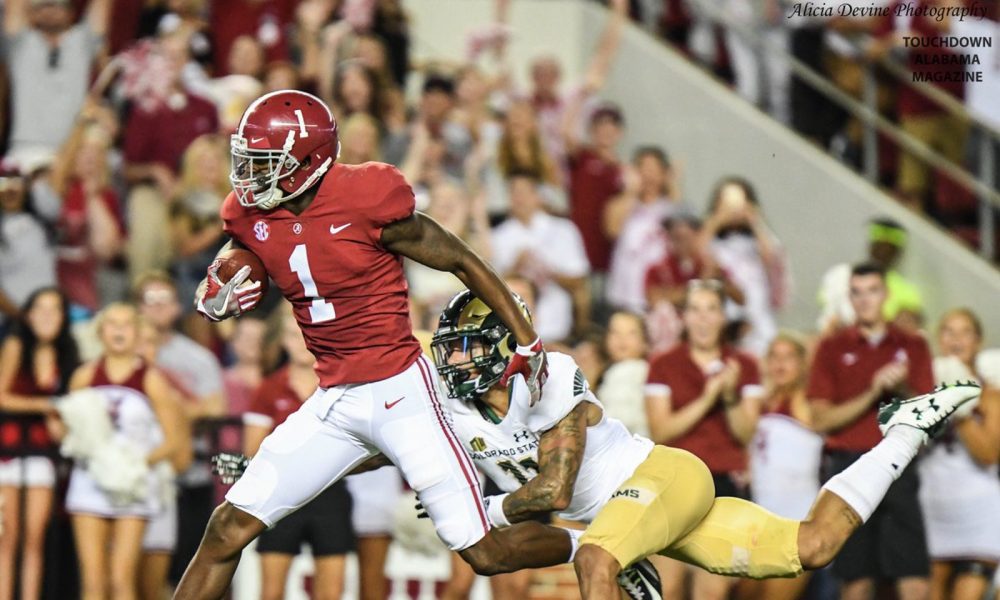 His teammate at the University of Alabama made it known prior to Saturday’s workout on how wide receiver Robert Foster would handle the NFL Combine, but Calvin Ridley’s words only nailed the tip of the iceberg. For a player that battled injuries and frustration, Foster showed at Lucas Oil Stadium why he was widely-regarded as a five-star prospect for the Crimson Tide.

Regardless of preconceived notions on his invitation being solely based on speed, the Pennsylvania native displayed strong hands as well as quickness and body control.

Foster began the day tying for the third-fastest 40-time among this year’s class of receivers, clocking in at 4.41 seconds. His time was better than 33 other targets, including Ridley (4.43s) and former Texas A&M standout Christian Kirk (4.46s).

His body control and flexibility within a Nick Saban team came in handy at the 3-cone drill, as Foster’s time of 6.90 seconds placed him 10th. His time was faster than 10 other backs and 13 receivers, especially, Kerryon Johnson of Auburn (7.07s) and Kirk of Texas A&M (7.09s).

Foster got the better of Ridley in the 20-yard shuttle, finishing 21 seconds faster (420 to 441) than the program’s No. 2 all-time leader in receptions. During the gauntlet drill, he made catching passes seem effortless. The once ESPN 300 target seamlessly went down the line grabbing passes, not allowing one to hit the turf. He suffered an occasional drop at different stations, but overall Foster was able to separate himself as a premiere athlete in the event.

Durability and production were the two biggest knocks against Foster, but NFL teams should understand his struggles if it takes the quarterback play at Alabama into account.

While he was pegged to have a monster senior year, Jalen Hurts’ inability to see the entire field hindered Foster from being a productive player.

For Tide fans that remember, the once labeled “can’t miss” product was on the verge of a breakout year in 2015 – until an injury happened.

Thoughts of leaving Alabama entered his mind before the 2017 season, but the team’s encouragement led him to remain on the roster. He totaled 14 receptions for 174 yards and a touchdown to salvage his career, en route to helping the Tide win a national championship.

Although he’s endured much, Foster’s determination may lead to a team taking a chance on him.