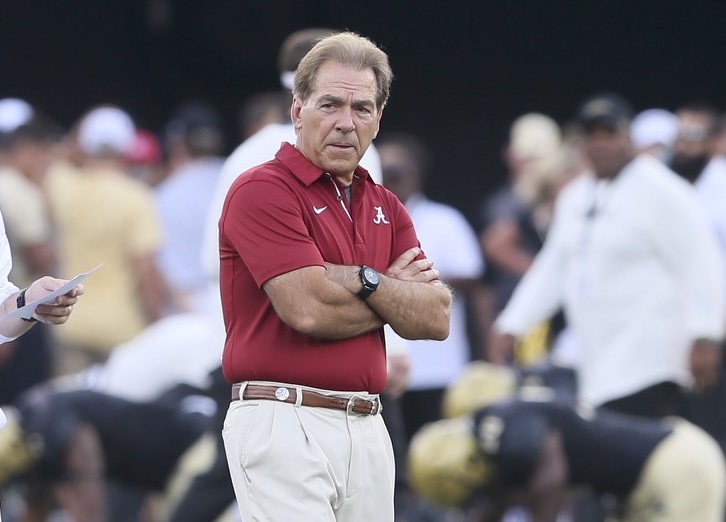 When you hear people say that this year’s Alabama team is unstoppable, a few scenarios do come to mind. See if you agree that these might derail the Tide.

Alabama is a juggernaut steaming toward another title and nothing and no team seems to be able to stop them. Or are there things that could do just that? In examining the worst case scenarios, there are five things that jump out that could possibly take the wind out of their sails. So looking at them in no particular order, see if you agree.

Tua Tagavailoa gets hurt – Remember Alabama’s performance against Georgia without Tua at quarterback last season? Believe me, a lot of folks do.

While Jalen seems to have made significant strides it’s hard to forget that game and how lost Alabama’s offense seemed to be. That could happen again against Georgia and especially Clemson and don’t forget that Auburn beat Alabama last season without Tua at the helm.

Yes, Alabama is a well oiled machine, but clearly Tua is the gear shift that gets that machine rolling.

Several coaches get new offers – Alabama had problems when Lane Kiffin left a few seasons ago. What if Alabama lost both their offense and defensive coordinators? What if they lost as many as three or four? Everybody wants some of that Alabama magic. I’m not saying that this is something that is happening, but it is not outside the realm of possibility.

The injury bug bites the team hard – While Alabama could sustain almost injury except Tua and continue to roll, what if the injury bug bit really hard and took away Alabama’s starting center on offense and may two of the starters in the defensive secondary? There are several players that come to mind if lost together would cause the Tide some heartache.

Saban gets sick or announces an early retirement – Not that this is going to happen, but what if it did? Boy talk about taking the team’s mind off their mission.

Somebody finally plays Alabama close and they have to depend on making a field goal to win – Let’s face it, this is in the back of every Tide fan’s mind. The entire fan base holds their breath on field goal attempts and lately, maybe even on extra points. Do you really know any fan that has faith in this kicker to make a game winning boot from 50 yards out? From 40? Oh heck Bama fans are scared of a 25 yard attempt.

And yes, while that’s the big five, there could be others such as Georgia really improving at the right time, or for that matter Clemson. And while it’s improbable, could Alabama get caught taking someone a little too lightly or start believing all the headlines, all the rat poison as Nick Saban calls it. These are at least somewhat, somehow within the realm of possibility.

What’s not within possibility is player jealousy, team finger pointing, or lack of preparedness. Can anybody see those happening?

But in recapping the article any of those things could happen and Alabama still keep on rolling and that is the most likely scenario. If none of things happen, then it’s entirely possible that this team could go down in the history books of one of the best teams of all time. It’s not just the plethora of NFL talent on the team, it’s how they all play together as a team.

Maybe that’s why it’s so hard to come with scenarios of how this team could be stopped and that’s why folks have to write articles like this on how they could be stopped, because it’s just not something that comes to mind too easily after seeing them play.