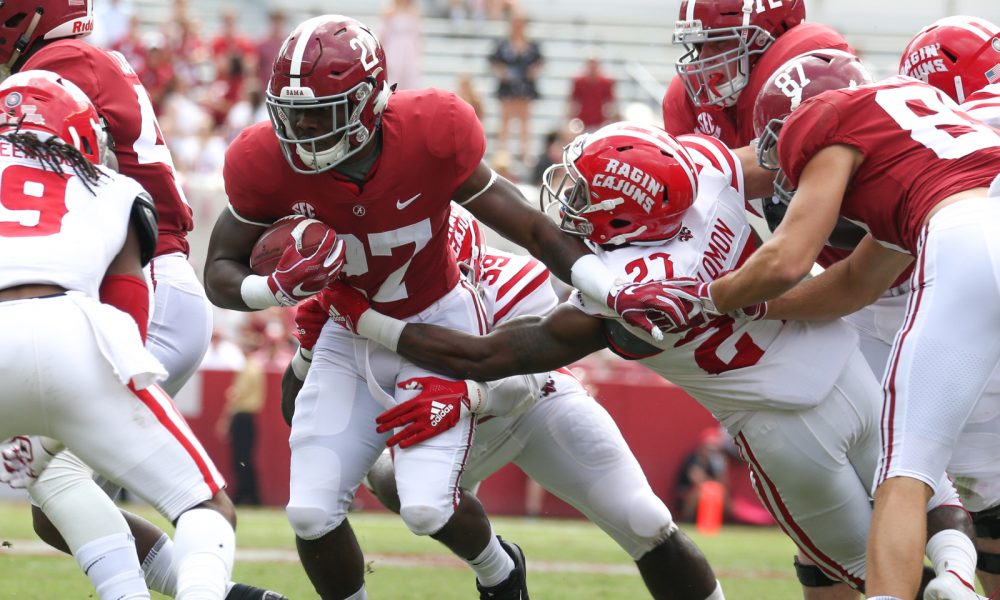 On Friday, Nick Saban will return to midseason form.

Recruiting is over and the University of Alabama football program has put the College Football Playoff national title game versus Clemson in its rearview mirror. The best way to return to dominance is for one to redirect its focus and get back to what created success from the start.

For Saban, it was superior assistant coaches, players understanding the importance of the Crimson Tide’s standard, and opposition shaking upon seeing Alabama on schedule that generated an unprecedented run of national championships since his third year in 2009.

After blowing up the coaching staff for a second straight offseason and signing the No. 1 recruiting class for 2019, Saban is ready to show college football once again on why he is the most revered coach in the sport.

In order to accomplish this, the 67-year-old is going to need some help from players that not a lot of fans and media personnel recognize as crucial names.

While spring practice allows us to see the student-athletes we have grown fond of, it also provides an opportunity for a few sleepers to rise and catch the league by storm.

Listed below are five players to keep an eye on, starting this week.

He is hitting more big names in recruiting quarterbacks, but Saban has always been firm on signing the best of running backs, wide receivers, linebackers and defensive backs.

Regardless of him being the lone player signed at his position in 2018, Jerome Ford has greatness written on him and he intends on showing it in spring. The former three-star out of Seffner, Fla., was an all-purpose before arriving on campus and at 206 pounds, the redshirt freshman displayed toughness and balance on scout team last season for Alabama.

Ford collected seven carries for 37 yards in four games (was redshirted) and while the hope for him is to become Josh Jacobs 2.0, Jamey Mosley spoke to yours truly of Touchdown Alabama Magazine at the media day for the Captial One Orange Bowl on how impressive Ford has been.

“He has really grown,” Mosley said of Ford. “He is going to be really good and he is already tough to tackle in space. What really sets him apart is that he gave our defense great looks on scout team to how different running backs were going to attack us. He is on the rise.”

Returning juniors Najee Harris and Brian Robinson Jr. will draw the lion’s share of carries; however, look for Ford to carve a role on offense.

The 6-foot-7, 325-pounder from Hernando, Miss., reaggravated a foot injury he suffered last spring and was relegated to the bench for 2018.

A former three-star in the 2015 class, Womack started all 15 games at right tackle for the Tide on its 2017 national championship squad.

During the season, he assisted an offensive unit that averaged 37.1 points and 444.1 yards offensively per game, while clearing the way for Damien Harris to record 1,000 yards rushing and 11 touchdowns on 135 carries. Womack graded out at 90 percent or better on assignments against Fresno State, Vanderbilt and Clemson, and did not allow a sack in 10 of 15 matchups.

With rumors of Alex Leatherwood moving from right guard to left tackle swirling around, keep all eyes on Womack starting at right guard.

He may not be the best pass protector; nevertheless, his physical frame and wingspan make him an exceptional run blocker.

He was in position for a huge sophomore season — after a good freshman year — but a serious knee injury early in 2017 ruined it for Miller Forristall. He tore his anterior cruciate ligament in week three versus Colorado State at Bryant-Denny Stadium and was granted a medical redshirt.

Prior to getting hurt, Forristall signed to the Tide in its 2016 class as a three-star from Cartersville, Ga.

He caught five passes for 75 yards in his freshman season, including a 22-yard reception from Jalen Hurts against Louisiana State University in a 10-0 win for Alabama.

Despite returning from injury in 2018, the 234-pounder could not beat out the freakish athleticism of Irv Smith Jr. Forristall watched the New Orleans native set a single-season school record in touchdown catches at the position (seven) for Alabama.

Smith tallied 44 catches for 710 receiving yards and averaged 16.14 yards per catch through 15 games a season ago. He projects as a second-round pick for the upcoming NFL Draft, but could sneak in late during the first round. With him gone and the possibility of Kedrick James (NCAA) serving a four-game suspension, the baton goes back to Forristall in being a reliable target.

The sunshine state produces nothing but coveted athletes.

Like Louisiana, Nick Saban takes pride in getting the best talent from Florida – especially when one looks at Amari Cooper, Calvin Ridley, Eddie Jackson, Jerry Jeudy and Patrick Surtain II.

Be sure to also add Daniel Wright to the list.

A shoulder injury robbed Tide fans of what it could have seen in Wright last year, as he had to repair a torn labrum and played in only four games. Listed at 6-foot-1 and 190 pounds, the once four-star recruit was one of the nation’s top-rated safeties from Boyd Anderson High School.

He made a name for himself on special teams’ in 2017 – recording 10 tackles, with one being a crushing hit in kickoff coverage versus Florida State. Wright picked up eight tackles with two pass breakups in 2018, and will have some competition to battle at free safety and dime.

He has the size and ability to play both spots, but it will be interesting to see how Wright goes about bouncing back.

Alabama’s pass rush has a chance to be at an all-time high, if it can maintain Terrell Lewis, Anfernee Jennings and Christopher Allen being healthy a full season.

Hailing from Baton Rouge, La., Allen was a five-star in 2017 that started producing at outside linebacker in the spring of 2018. A knee injury set him back and Alabama fans missed the performance he has on pace to give.

Allen has grown to 6’5” and 250 pounds and now as a redshirt sophomore, he’s part of a positional unit that will wreak havoc under Sal Sunseri.

He collected six tackles, two quarterback hurries and one forced fumble in 2017.

Other sleepers in spring

Which new Alabama coaching hire will be the top recruiter?