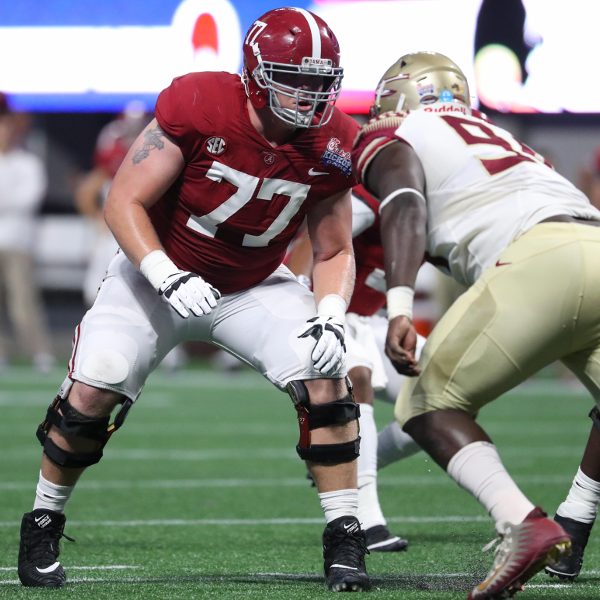 He missed the first four games of last season and lost his starting job at right tackle to Jedrick Wills; however, Matt Womack has returned and is working at right guard for the first unit.

The senior and former three-star from Mississippi learned from Ryan Kelly, Cam Robinson, Bradley Bozeman and Jonah Williams on how to relate calls and control things up front, and now he gets the opportunity to teach younger players and become an anchor for this group.

Prior to a foot injury he suffered in 2018, Womack had a strong junior year in 2017 and one where he graded out at 90 percent or better on assignments versus Fresno State, Vanderbilt and Clemson in the Sugar Bowl for the College Football Playoff semifinal in New Orleans, La.

RELATED: Tua Working Under the Impression His Job is Up For Grabs

Listed at 6-foot-7 and 325 pounds, he assisted running back Damien Harris to 1,000 yards rushing with 11 touchdowns and helped the University of Alabama secure a 26-23 win over Georgia in the CFP National Championship matchup at Mercedes-Benz Stadium in Atlanta.

His size and knowledge on offense at a guard position will be critical to the Crimson Tide’s success in not only creating balance, but also making sure quarterback Tua Tagovailoa stays upright in the pocket. According to Wills in player interviews on last week, he said Womack “knows everything that’s going on” in terms of happenings inside the program.

“He’s seen all the changes made around here,” Wills said of Womack. “He’s been through multiple coaching staffs and multiple offensive lines. For him to share his knowledge is helpful to not only me but the younger guys.”

Womack has been one of few players that Nick Saban has complimented in spring.

With first-year coach Kyle Flood bringing in experience from the National Football League, it will be interesting to see how his personality looks to mesh with Womack’s and the rest of the group.

This offensive unit has the potential to be best one since UA’s 2012 and 2013 bunch.