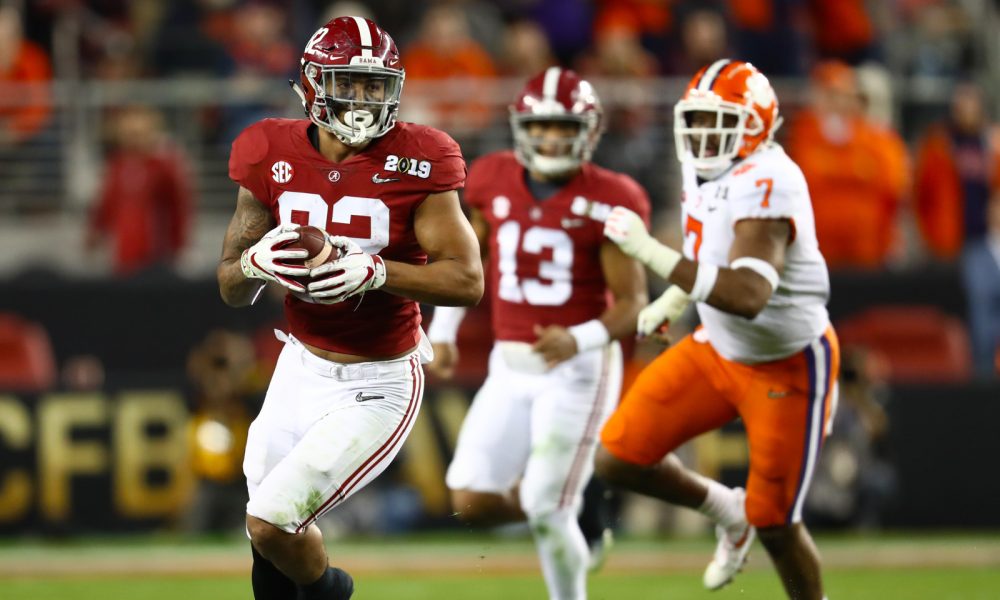 As he does each year, Bill Belichick of the New England Patriots makes it a priority to visit his student in Nick Saban at the University of Alabama on Pro Day to scout out potentially players he feels would fit the Patriots’ system.

Belichick has had the liberty of drafting Dont’a Hightower – a three-time Super Bowl champion – and Cyrus Jones (later cut and signed to Ravens). He also had DeAndrew White signed to New England’s practice squad in 2016 and the native Texan earned a Super Bowl ring versus the Atlanta Falcons.

This time around, the National Football League will have its annual draft in Nashville, Tenn., and Belichick’s team has the final pick of the first round. For the defending NFL champions, it received news on Sunday via social media on its superstar tight end – Rob Gronkowksi, 29 — announcing his retirement from the league after nine seasons.

It all started at 20 years old on stage at the NFL draft when my dream came true, and now here I am about to turn 30 in a few months with a decision I feel is the biggest of my life so far. I will be retiring from the game of football today. I am so grateful for the opportunity that Mr. Kraft and Coach Belichick gave to me when drafting my silliness in 2010. My life experiences over the last 9 years have been amazing both on and off the field. The people I have meet, the relationships I have built, the championships I have been apart of, I just want to thank the whole New England Patriots organization for every opportunity I have been giving and learning the great values of life that I can apply to mine. Thank you to all of Pats Nation around the world for the incredible support since I have been apart of this 1st class organization. Thank you for everyone accepting who I am and the dedication I have put into my work to be the best player I could be. But now its time to move forward and move forward with a big smile knowing that the New England Patriots Organization, Pats Nation, and all my fans will be truly a big part of my heart for rest of my life. It was truly an incredible honor to play for such a great established organization and able to come in to continue and contribute to keep building success. To all my current and past teammates, thank you for making each team every year special to be apart of. I will truly miss you guys. Cheers to all who have been part of this journey, cheers to the past for the incredible memories, and a HUGE cheers to the uncertain of whats next.

After the man who earned the nickname “Gronk” shared his decision on Instagram, Adam Schefter of ESPN crafted a report. Following his two seasons at University of Arizona, Gronkowski turned in an incredible pro career. A former second-round pick of the 2010 NFL Draft, he tallied four 1,000-yard seasons – including a career-high 1,327 yards with 17 touchdowns on 90 catches in 2011.

Gronkowski led the NFL in touchdown receptions that season, while averaging 14.7 yards per catch. He was a three-time Super Bowl champion, five-time Pro Bowl selection, four-time NFL All-Pro first team, and was the league’s Comeback Player of the Year in 2014; as he brought in 82 catches for 1,124 yards and 12 scores.

Despite the gaudy career stats that include 7,861 yards receiving and 79 touchdown catches, Gronk’s body took a beating in the last few years. He had sustained injuries to his left arm, right knee, back and ankle. The 2013 season was troubling for him as he had surgery on his forearm, knee (ACL and MCL) and back, which caused him to miss nine games.

With him bowing out gracefully, the Patriots are in the market for a tight end to work with Tom Brady for at least the next four years.

Brady, 41, has stated multiple times that he wants to play until he’s 45.

Upon seeing Irv Smith Jr., at pro day and studying film on him, Belichick is impressed with the former Alabama football star. While Smith is smaller than Gronk at 6-foot-2 and 242 pounds, his ability to be a matchup nightmare, run precise routes and provide Brady a dependable target lines up with the big personality in Gronkowski.

Smith turned in a smooth performance at the NFL Combine, clocking a 40-time of 4.63 seconds and went through the gauntlet drill with ease. He was one of the reasons why Tua Tagovailoa had a Heisman-like sophomore season, seeing how Smith totaled 44 receptions for 710 yards and seven touchdowns. His output in scores set a single-season school record for tight ends.

Ten NFL franchises will be looking for a game-changing weapon to flex out wide. Keep all eyes on the possibly of Smith to the Patriots.

The NFL Draft will start on Thursday, April 25.