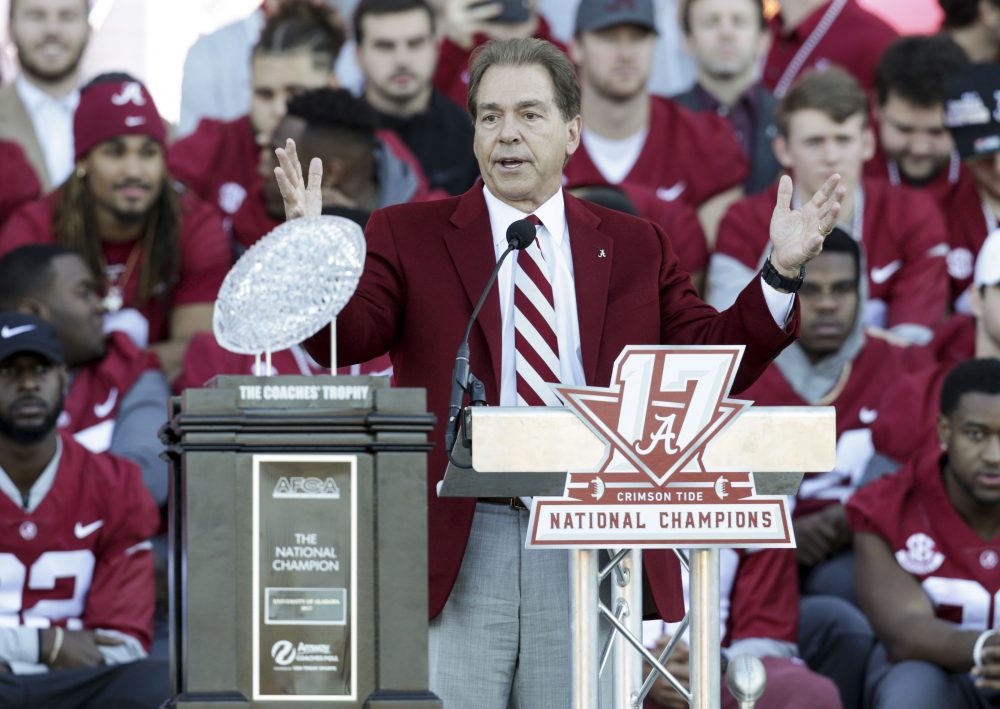 He is regarded as the greatest college football coach of all-time and while he runs the University of Alabama, Nick Saban has no problem showing love to historical black schools too.

In typical Saban style, he was given a police escort to Grambling State University in Louisiana as he was the guest speaker for the “Legacy Keepers: Preserving the Eddie Robinson Playbook” series.

He became the second speaker for 2019 to participate in the event and was meet outside the museum by the World Famed Marching Band.

Before speaking at the venue, Saban paid homage to the 100th anniversary of Eddie Robinson in taking some photos in front of Robinson’s statue with key members of the committee and other dignitaries.

Inside the reception room for the Town Hall event, the 67-year-old and five-time national champion with the Crimson Tide took part in a Q&A segment.

“I think people like Eddie Robinson and (Paul) Bear Bryant probably did things that were so much more important to society, in terms of the opportunities that they created, probably the integration of the South, which is one of the greatest things anyone can be involved in,” Saban said on Tuesday. “I’m just so pleased and honored to be here as part of Coach Robinson’s 100th birthday.”

Per Saban, humility and focused were the biggest lessons he learned from Robinson.

RELATED: Three reasons why Tua Tagovailoa’s durability should not be questioned

“He talked about not being satisfied and treating people the right way,” Saban said.

“It was something that imbodied so much class in the way he spoke and carried himself. That was my first and greatest impression that I have – lasting impression – of Coach Robinson.”

Broderick Fobbs, current head coach of the Tigers, was very pleased to have Saban at the university to take in what Robinson had built.

“We were very excited to have Nick Saban, a coach who I read a lot about and study his coaching philosophies, on our campus,” Fobbs said. “Coach Saban is such a well-respected coach across the nation. It was an honor to have him on campus.”

Robinson, who coached at Grambling State from 1941 to 1997, ended his career with 408 victories – the third-most in college football history.

He coached every game of his tenure and was inducted into the College Football Hall of Fame in 1997, prior to his death on April 3, 2007.

The Eddie Robinson Award, which is presented annually to the best coach in college football by the Football Writers Association of American, has been twice earned by Saban in 2003 at LSU and 2008 at Alabama.