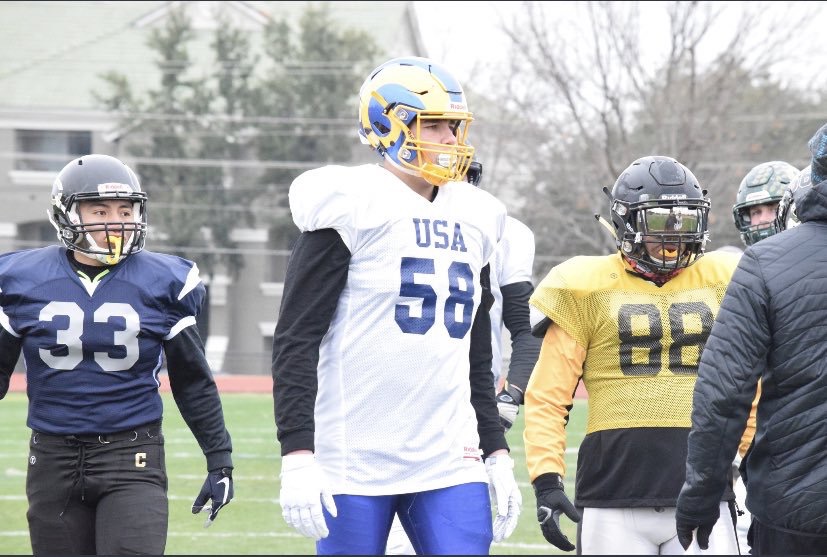 Alabama offered 2021 offensive lineman, Tristan Leigh, on Tuesday and it is what Alabama hopes is a start to a great relationship.

#AGTG Extremely Blessed and Humbled to receive my 15th D1 offer from The University of Alabama!!?⚪️#ROLLTIDE @AlabamaFTBL @KJJFlood pic.twitter.com/1rKKCdvM3Y

Leigh is a 4-Star offensive tackle and is a product of Robinson High School in Fairfax, Virginia,. The Tide’s offer is his 15th Division one offer. Alabama’s offensive line coach Kyle Flood informed Leigh of his latest offer and it is one Leigh has been waiting on.

“I was so excited, I had no words,” Leigh said. “I have been waiting to hear those words since I was a kid.”

Despite Leigh wanting to have an opportunity to play for Alabama for a long time now, he did not grow up an Alabama fan or a fan of any program. He had a deep love for the game as a whole.

“I have always watched them, but I never really had a favorite college team, I liked watching good games,” Legh said.

Alabama does not have a commitment in the 2021 recruiting class. Their staff is working hard on the recruiting trail this Spring to build relationships with several 2020 and 2021 recruits. Leigh is one of the players Alabama is looking to strengthen their relationship with and he is interested in moving things forward also.

He said he feels their relationship is headed in the right direction.

“It is new, but I feel like we will have a good relationship and I plan on making it happen,” Leigh said.

Michigan, Louisville and Penn State are among the other schools, who have offered Leigh and it is easy to see why.

Leigh stands at 6-5 and weighs 275 pounds. He is one of the top offensive tackles in the 2021 recruiting class and thrives in the run blocking game. He is an aggressive blocker, who has quick feet, which allows him to make it difficult for rushers to get to his quarterback.

The 2021 recruit has two full seasons of high school left, which means he has some time to improve his game and work on some things. He has a couple of things on his agenda.

“I just plan on continuing to work on getting my technique perfect and to keep getting stronger in the weight room,” Leigh said.

Gaining a later verbal commitment from Leigh will continue the DMV to Tuscaloosa train, but for now, Leigh is weighing his option and working on building a relationship with Nick Saban and company.