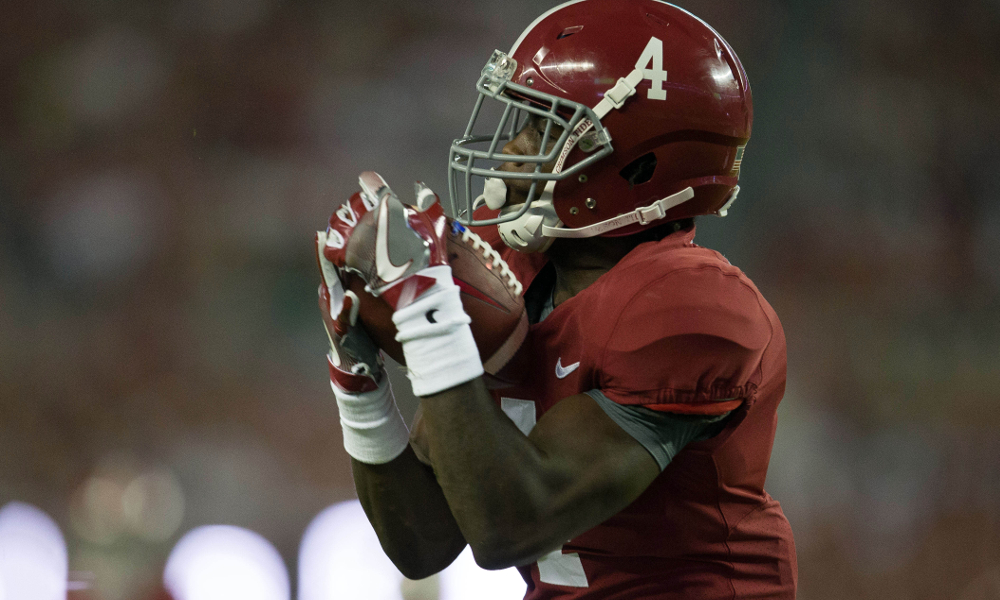 Summary: Since his arrival to the University of Alabama as a five-star from Deerfield Beach (Fla.) High School in the 2017 recruiting class, Jerry Jeudy has been the complete package at wide receiver for the Crimson Tide. The 6-foot-1, 192-pounder has an incredible quarterback in Tua Tagovailoa; however, Jeudy complements the five-star signal caller well.

He led Alabama in receptions (68), receiving yards (1,315) and touchdowns (14) through 15 games last season, as his output in yards and scores fell second to Amari Cooper in the single-season school record book.

Jeudy’s 14 touchdown catches tied him for seventh-most in the nation and his 19.34 yards per catch average led the Tide.

He recorded five 100-yard performances – including an outing versus Clemson in the College Football Playoff National Championship matchup, where he totaled 138 yards receiving with a score on five catches.

Jeudy won the Fred Biletnikoff Award and was named a consensus All-American.

He may occasionally drop a pass, but Jeudy is usually sure-handed. He has proven to collect tough catches in traffic, bring in deep post patterns, take a slant route for a touchdown, and even burn defensive backs for long scores.

His patented juke moves and route-running prowess make him the most challenging receiver to cover in the sport. Jeudy has a knack for getting to the top of his route and then make subtle changes in direction, which throws off guys in the secondary.

Much like his Florida counterparts, Amari Cooper and Calvin Ridley, Jeudy has developed the instinct of how different teams scheme him.

He does an exceptional job finding weak areas in opposing defensive backfields and frustrating coordinators with clutch plays in key situations.

All four of the Tide’s starting receivers have speed, but Jeudy’s is deceptive.

His combination of agility and change of direction makes even the best angle for a defensive back challenging to tackle him. Once he stacks a corner or confuses a safety at the top of his route, it is virtually impossible to stop him for pursuing the end zone and scoring points.

Summary: Everyone has a weakness, but Jeudy’s is yet to be found.

He brings a strong work ethic, especially this offseason, and performs every task on the field with ease. The fact of him not getting every pass thrown his way like Cooper (2014) and Ridley (2017) had it could be a weak spot, but having four strong weapons actually makes it better for Jeudy.

He’s not overly talkative on social media and according to sources, Stephen Smith of Touchdown Alabama Magazine knows Jeudy is solely focused on football.

No glaring issues are in his game.

After winning the Biletnikoff Award, posting 1,000+ yards and becoming an All-American, the expectations for Jeudy next season would be to build off his sophomore year. He is currently 15 touchdown receptions shy of tying Cooper’s mark of 31 for first all-time in school history.

Jeudy is 148 yards away from supplanting O.J. Howard (1,726) and having the 10th most career receiving yards all-time at Alabama, as he stands at 1,579. Another 1,000-yard campaign with a national championship is ideal, but Jeudy is also eyeing the chance at the Heisman Trophy.

Tagovailoa is the favorite to win the honor and potentially be the No. 1 overall pick of the 2020 NFL Draft; nevertheless, keep all eyes on Jeudy for both honors. He arrived at the Capstone to be the best ever at receiver and after 2018, the premiere weapon is set to cap off a strong career.

Jeudy’s offseason training with NFL superstar Antonio Brown will pay dividends in the fall for a wide out that wants to be great. The quartet of Jeudy, Henry Ruggs, DeVonta Smith and Jaylen Waddle all bring out the best in each other, but Jeudy makes a lot of things look effortless.

With three of Alabama’s challenging conference games at home, look for Jeudy to have a field day. The Crimson Tide has an offensive line that will be much-improved in protecting Tagovailoa, so good luck to all defensive backs that anticipate locking down Jeudy.

2019 Player Spotlight: LB Terrell Lewis
Is Alabama as Good As Vegas Thinks Against SEC West?
To Top
%d bloggers like this: