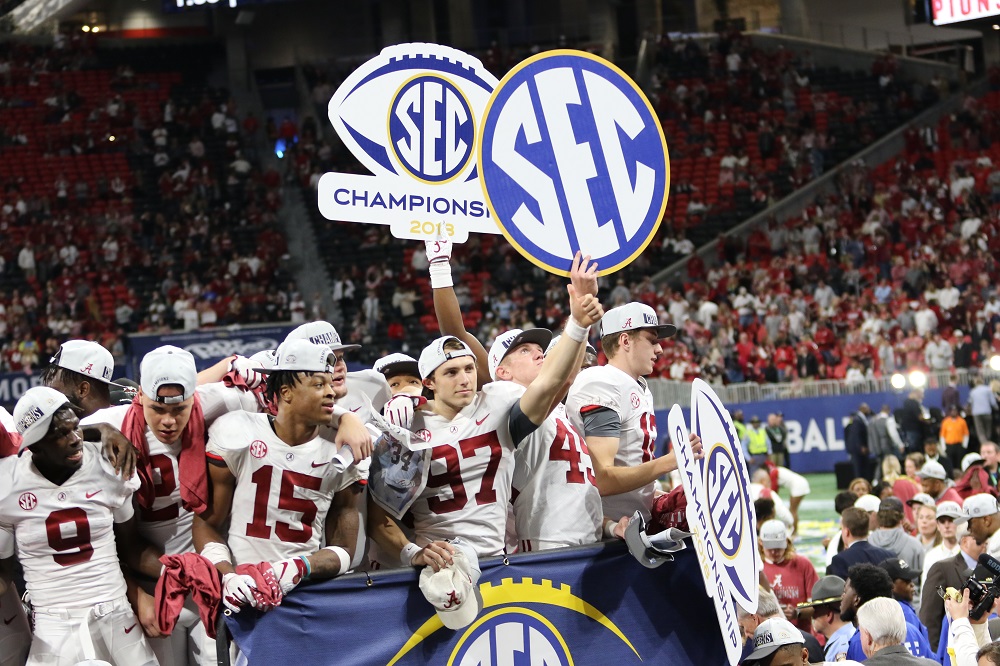 Last year Alabama simply steamrolled the SEC West. Now Vegas thinks they’ll do it again. Is that realistic with the West improving? Read and see if you agree.

Is Alabama as Good As Vegas Thinks Against SEC West?

Alabama is an early favorite against the SEC West according to sports books in Las Vegas and even the tough teams, LSU and Texas A&M are at least a two touchdown underdog. The rest of the teams are much more a dog. Is Alabama really that far ahead of everyone in the West? Let’s take a look.

The early test is Texas A&M, now comfortable with the new coach and his style of playing. Sure last season Alabama almost doubled them up with a score of 45-23, but this season the Aggies are expected to have a little more punch in their offense than last season. The question will be can they slow down Alabama’s offense this season?

I wouldn’t be shocked if the Aggies were able to take last year’s 22 point loss and shrink it to a 10 point loss this season, but if they let Alabama have any help at all, I could see it being another rout too.

Next on the list of tough games is LSU who got blanked last season 29-0 in what was an embarrassing loss for the Tigers. To make matters worse, it was at LSU. This season is the the year that many think will see the LSU Tigers finally turn the corner on offense and put some numbers up and give their overworked defense a little help finally and their defense will be nasty again this year.

While I don’t see the Tide winning by 29 this coming season, I still see a win. I was there when the Tigers shocked the Tide in Tuscaloosa before and while Alabama won’t suffer a loss, I could still see the Tide and their fans being shocked by how close this one could be. Best guess at this point, a Bama win by 10, not the 13 the boys in Vegas are seeing.

In the past, Mississippi State was always a game that gave the Alabama staff the heebee geebees. They could get up for a game and make you sweat out a tough physical game in a spot on your schedule where you really don’t want to get beat up. Not with the Auburn game and SEC Championship coming up.

Last season they won 24-0 at home and this season they’ll have try and spank an angry dog in his own yard. I don’t see a 24 point win again, but I think they’ll by more than two scores.

Lastly, it seems every time I cover an Iron Bowl game in Auburn they lose. Two years ago they got the crowd whipped up it was the loudest I had ever heard a fan base get and I’ve been to just about all the SEC stadiums.

Forget whatever the records are going into this game. Forget what the Vegas point spread is. Forget last year’s game ended with the Tide winning by 31 points and remember that the game was in doubt at halftime in Tuscaloosa and that a called back touchdown could have had Auburn leading at the half.

This is just one game that could go either way, seriously. Should Alabama win? Of course. Will they win? I think they will. Will it be another runaway game that makes Auburn look like they forgot games have two halves? Don’t count on it. Best guess, Alabama in a close one, just for the incredible home factor Auburn can produce.

The question we’ll all find out sooner than later is not whether the Alabama can produce the same kinds of numbers against these teams they did last year. I think they can. The real question is can the defense keep the opponents scores as low and at this point, I don’t think so. But that’s why they play them.

Ole Miss has put together a very impressive staff that could pay results sooner than later and as talked about many teams in the West are improved from last year’s teams. We’ll all just have to wait and see if they’ve improved more than Alabama has improved and how much they can and will close the huge gap that was there last season.

So to answer the question is Alabama as good against the West as Las Vegas thinks, the answer right now is no. I don’t see Alabama winning every game in the West by more than 14. I think there are two teams that have a chance to beat that spread, but we’ll know a lot more early on after the Texas A&M game. If they rip them apart and run up the score, then I may want to edit this article.