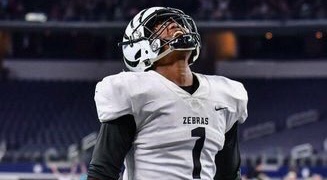 Dametrious Crownover received an offer from Alabama on last month, adding to his impressive list of Division 1 offers.

Glad to receive an offer from the University of Alabama #RollTide ?⚪️? pic.twitter.com/ieXVjbp3LR

Crownover is a 6-7 235 pound tight end out of Grandview, Texas. The 2021 recruit doubled as a tight end and defensive end for Grandview High school during his sophomore season. Alabama’s coaching staff caught up with Crownover during the Spring.

“They came by my school that morning to watch my practice,” Crownover said. “Then my head coach told me that they wanted me to give them a call. It was great. I was glad to receive that one.”

Alabama has remained in contact with Crownover since they offered him. The Tide’s tight end coach and special teams’ coordinator Jeff Banks talks to Crownover on a consistent basis as he continues to effectively recruit the state of Texas.

“We talk every other week I would say,” Crownover said.

Grandview High School was able to lean on Crownover’s athleticism on both sides of the ball during a championship season. his size and speed made it difficult for offensive linemen to contain him on the rush and his height made him a mismatch against smaller defensive back at tight end.

The Texas product is closing in on 20 offers with his two latest offers comes from Auburn and Alabama. Crownover has not visited Alabama since they offered him, but the Tide would love to get him on campus for a workout to get a live look at what he can do in action. Although Crownover has not gotten a chance to talk to Nick Saban on a visit, the 4-star recruit has high praise for Saban’s coaching style.

“It is nice,” Crownover said. “I like everything about the dynasty Saban has built there, how he runs his team and how he coaches.”

Alabama’s 2021 recruiting class only has one verbal commit in 4-Star defensive back, Latrell McCutchin. The Tide is expected to add one or two tight ends in their 2021 class and Crownover is a name to keep an eye on as Alabama plans to continue to work to build their young relationship.