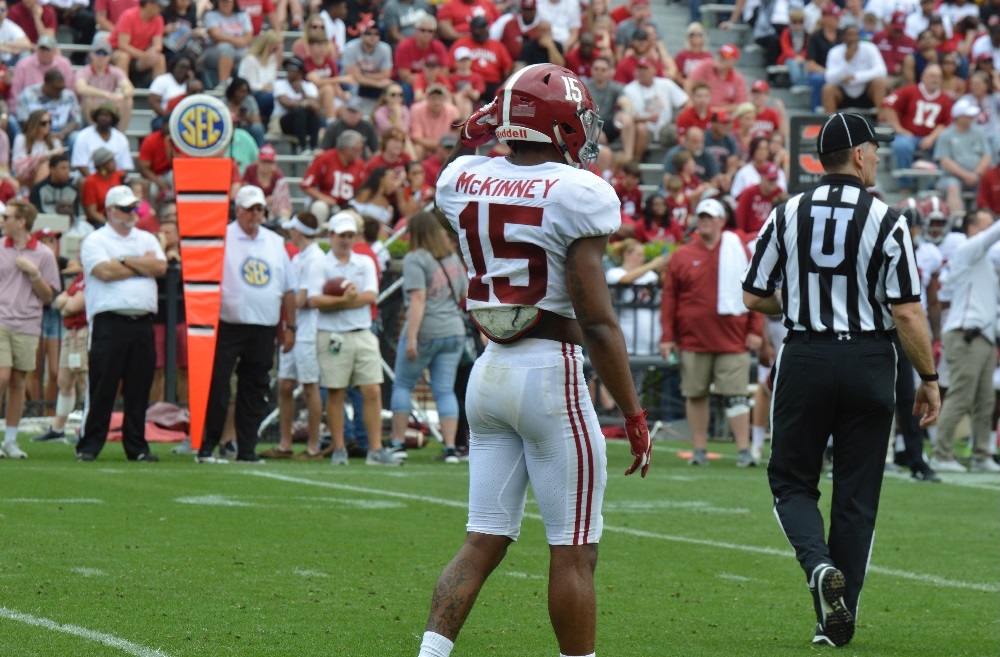 So many times the weaklink, Alabama’s defensive backs may now be one of the strong parts of this year’s championship team. Read how and why in this great story

Last season was a growing and learning experience for the Alabama secondary. For the first time in a long time, there were no returning starters from the year before to start the season. By the seasons end, many of the people in the secondary had suffered injuries, been torched badly or blew a coverage. In the championship game, they just didn’t get their act together and Clemson’s quarterback Trevor Lawrence just carved them up making them look much worse than they were.

When you look back at the few losses Alabama has had during the Saban era, you could certainly point to the defensive secondary for many of them. Alabama’s usual history in the secondary is they have one outstanding player, other players that rotate in and out due to injuries or bad streaks or they are recovering from having everyone leaving at the same time.

Also in the past, for whatever reason, Saban has had less luck signing a whole class of studs to the secondary and has had to have experiments where receivers are tried out for depth and support.

Well this year could be the rare exception. Almost everyone is coming back, there are lots of guys with valuable playing time in backup roles, but the big news is that at least to start the year, he has a great group of highly desired recruits at the same time and they’re all healthy.

This could be the group that takes this secondary from embarrassing to embarrassment of riches. Yes, there’s that much talent now at these positions and it’s time you starting learning about it.

Let’s start with the cornerbacks, Trevon Diggs and Patrick Surtain II. Both are on the verge of becoming shut down corners whose fame and name will soon be known nationwide.

Diggs was having one great junior season, he was on such a roll that many felt he was sure to become a star and leave early for the NFL draft at season’s end. However on Oct. 6th, when Alabama needed him the most for the stretch run, he fractured his foot and was out for that crucial time. He still thought about leaving early for the NFL, but is now glad he didn’t.

Diggs came to Alabama as a highly rated receiver, but as was usually  the case at Alabama, they needed help in the secondary and he spent his early years learning that role. At 6’2”, he’s taller than most corners but it doesn’t affect his speed. Some worried over the foot injury, but he looked great this spring and seems to recovered completely. If he has the kind of season many project him to have, he’s going to be one of the top defenders in the SEC as he was last season before the injury. Consider this cornerback job nailed shut for Diggs.

Patrick Sartain II came into 2018 as a freshman who wasn’t supposed to see as much playing time as he did. Because of the lack of depth, he was inserted in playing time when Diggs went down in a starting job. He really learned on the job, but being the son of an NFL Pro Bowl cornerback, he had lots training to fall back on. By the season’s end teams didn’t really want to challenge Surtain. In the national championship game, Clemson didn’t target him much at all and when they did, he broke up the pass.

Not only is his pedigree impressive, but so is his background as a five star recruit and the nation’s number one cornerback prospect, so was his play last season. With this combination, he will be the other shut down corner on this team and so far, the Tide’s secondary evaluation looks pretty darn impressive if you just stopped here.

But now let’s talk safeties and you have to start with one of the best in the country, Xavier McKinney. After getting his feet wet on special teams and substitutions as a freshman, he not only won the starting job last year as a sophomore, but also became the alpha dog leader of the defensive secondary group. Not only did he lead that group, he led the SEC as seen in the following graph on Twitter from PFF.

Folks, this guy is set to have a season that will make him a household name if he isn’t already after earning the MVP award for the first round of the college football playoffs against Oklahoma. He finished last year with 73 tackles, 6 for loss and 2 interceptions, one of which he took back for a touchdown.

As for the other safety, some say a battle could still be fought for this job. There is a lot of talent there, but I look for Jared Mayden, a senior who has a lot of experience to finally nail down a starting job before leaving Tuscaloosa. He looked very sure and solid when he did play and he did play a lot. He saw action in 13 games last season and came up big in several instances such as the SEC Championship, when after sitting on the bench in the first half, he came in the second half and played strong including the big break up of a pass on the Bulldogs’ final drive of the game that helped Alabama secure the win.

McKinney has been vocal that Mayden is “his boy” and that he knows he can count on him. The rest of team feels the same way and after the strong spring he had, now the coaches do too. He is going to be a very good replacement this year and will seamlessly be plugged in and be as solid as almost any safety in the SEC.

Now in Saban’s world, you may as well count his nickel back or “Star” player as a starter, since he uses them so often and that person is Shyheim Carter who thought about going into the NFL early, but returns for his senior season. Now “Shy” is not only the returning star back, but is finishing out his senior season and he wants to be an impact player to attract NFL attention. And he will.

He had 12 starts last season, was a vocal and lead by example leader and he can literally be plugged into any position in the defensive backfield. He was tied for second place in the SEC in interceptions made 44 tackles, 6.5 for loss and has 10 pass break ups to tie for second on the team. You won’t be able to find many star DB’s who are any better.

So if all you had was this starting five players, that alone is a ton of riches. Even the great analyst Phil Steels says Alabama is one of the top three defensive back groups in the country. But we are far from telling you all the talent in this group by a long shot.

When it comes to rotational players and subs, Bama has it covered.

Josh Jobe, was just a true freshman last season who was needed to help plug some holes and give relief and he was a very good breath of fresh air. He played in all but one game last season and when  Saivion Smith went down with an injury in the title game, Saban had enough faith in him to put him in the second half of the championship game. He responded like a veteran and  broke up one pass and recorded two tackles during his opportunity in prime time. He is still so young to have his level of mental acuity and instinct. He’s may be as good most starters on any other team already, but here, he’s just part of the embarrassment of riches. So consider a great corner back up as defiantly in the bank.

Other younger returnees are Nigel Knott came in with the 2016 class and he played in 10 games last season as a sophomore. He was one of the nation’s top recruits and is just awaiting his time to be a true star. Eddie Smith another corner prospect, played in six games last season and has great ball hawking skills. Jalyn Armour-Davis hurt his knee before the season even started last year, so this will be the first year he’ll see the field. He was the number two player from the state of Alabama and a top 15 corner in the nation. He’s recovered and the coaches can’t wait to give him a few reps to show off that talent. Then there’s Daniel Wright, a reserve safety who like Armour-Davis, also suffered a season ending injury, but is also recovered now and ready to go. Wright will be going into his third year at Alabama and will see action a back up safety.

OK, so there’s a lot of talent, high ranking recruited studs returning to back up the starters, now it’s really getting embarrassing, because the talent isn’t over yet, not by a long shot.

Saban’s recruiting has paid off in a great group of experienced started and super talented back up players returning, but from this last number one class, he brought in even more talent and some of these freshman could make an impact right away because of the high talent levels they possess. Saban didn’t just get one or two incoming freshman DB’s this year, he brought in five new highly rated defensive backs to Tuscaloosa.

Jeffery “Scooby” Carter enrolled early and got in a little spring ball where he did good enough to become a second string corner, good enough to start for the white team. So there’s yet another good backup corner. Ok, so there’s a lot of good corner subs, but what about good safety subs?

Well Saban just happened to sign three highly rated safety recruits, Jordan Battle, DeMarcco Hellams and Brandon Turnage. Hellams and Battle are both bigger 6’1” players, but Hellams will arrive for fall practice at almost 215 pounds of filled out muscle. Not only will these two provide immediate backup at safety, Hellams might just put up a fight for a starting job much like Minkah Fitzpatrick did several years ago and never let it go. But wait Battle was the most highly rated safety coming out of high school, so maybe it will him that lands a starting job at safety. Oh my, what a problem for a coach to have.

Now you see why this group really does boast a ridiculously deep talent pool and why it’s almost an embarrassment of riches indeed. If you like this story and missed the same kind of in depth analysis on other groupings on the Tide’s 2019 squad, check out:

Alabama Football – An Embarrassment of Riches – Part 2 – The Receivers

and Alabama Football – Embarrassment of Riches Part One – Offensive Line