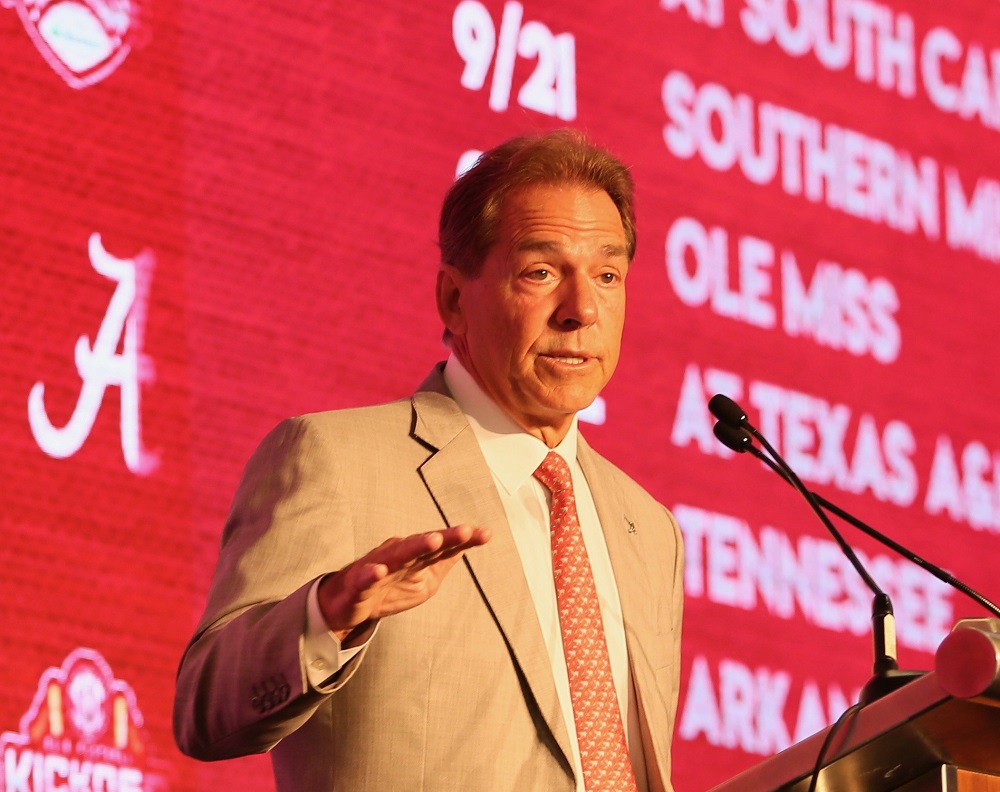 With SEC media days over and the usual coach speak done, wouldn’t it be nice if they really said what might be on their mind? See if you could see Saban say this.

Nick Saban was raised to be polite, not to brag and not whine, so he won’t say some things in the way he might really like to. With SEC media days over and the typical coach speak over, it might be fun to hear what coaches might really say if they could.

Here are a list of some of the things that can be thought Saban might like to say but won’t. At least not in this way. And while this article is purely speculative, knowing Saban, it’s probably right on target. See if you agree.

I give 100% to this university. I outwork every coach in college football and I get better results that any coach. So why can’t I get 100% back from the same fans who profess they love me and this fine school? Why are there empty seats at kickoff? Why are the stands only filled for the LSU, Auburn and other big games and not every game. Forget sell outs, I want actual butts in actual seats!

Why is the student section almost empty in the 4th quarter? Did you forget I was already quoted saying, “I don’t think (the students) are entitled to anything. I think it ought to be first come, first serve. (Talking about guaranteed seating) If they don’t want to come, they don’t have to but I am sure there are plenty of other people who would like to have those seats and the team would love to have their support.” So you keep no showing and that student section is going to shrink big time.

No, I don’t particularly like every coach I coach against. Some of them are loudmouths, liars, whatever, or are just coasting through their contract phoning it in. But there is a thing called respect and I walk across the field to acknowledge every coach, every game. I don’t talk about other coach’s shortcomings when I recruit and I don’t like it when other coach’s talk about me with lies or speculation. Real men understand respect and the players worth getting are smart enough to see that for themselves.

Now most coaches are hard working men who merit respect for what they do, but there are the other kind too. But no matter what a jerk another coach can be, I’ll always give them my public respect. That’s just how I was raised.

I’ve been called a grouch, I’ve been told that I don’t like reporters and the dog and pony shows I have to do as part of my job. That’s not true. I just don’t like it when a reporter asks me a really stupid question and asks the same question over and over because he didn’t like the answer I gave them. I hate it when they don’t do their homework and take the time to come up with intelligent questions. As for being a grouch, most of you just never get a chance to see the lighter times, but the ones who know me best and I care about the most know the real me. I’m actually a real hoot!

You want a tougher schedule? So do I, but let’s face it, after winning every single opening week big game we’ve been in, there aren’t exactly a lot of top teams lining up, willing to meet us week one. As for the easy game before the Auburn game, it’s like another bye week for us to rest up for a stretch run of four tough games to come. That was a tradition long before I came to Alabama and long before I came to the SEC, Big 10 or any other conference. When every other team stops it, so will I.

Since we’ve gone to the playoffs every year they’ve had one, I think I know what he heck I’m doing.

Some people say I’m lenient on players that run afoul of team or school rules. Ask the ones who did those offenses if they thought I was lenient. As for those folks who think I’m easy, I could care less what they think, they don’t know the facts I know.

I do give second chances if a player deserves it, if he’s truly sorry for what he’s done and is willing to work himself out my dog house. I really only care how the woman I married feels about me and how I feel about myself when I look in the mirror. I made a promise, unspoken or not, to my players and their family that I would do my best for these boys and do what I think is best. I really don’t give a rat’s ass what anybody else thinks.

I wish you folks would just shut the heck up with that talk. How many times do I have to tell you the answer is when the heck I want to and even I don’t know when that will be. And do you really think that even when I know it, I’d tell you? It’ll happen when it happens and you won’t have much notice.

I really don’t care where others think my place in college football should be. I’ll never argue what my place should be. The wins and losses, titles and records will speak for themselves.

You may think it’s corny, but in the end, I’ll think I’ll measure my success by how many boys I have helped become great men, showed them they could accomplish anything, not just football greatness, by using the process I taught them to become great in something beyond football. That’s the legacy I care about, that and winning Miss Terry’s admiration.

And remember folks, this is a speculative article and except for the one quote in quotation marks, these are not words from Nick Saban, just this author’s guess of what he might like to say if he wasn’t raised with the manners he was.