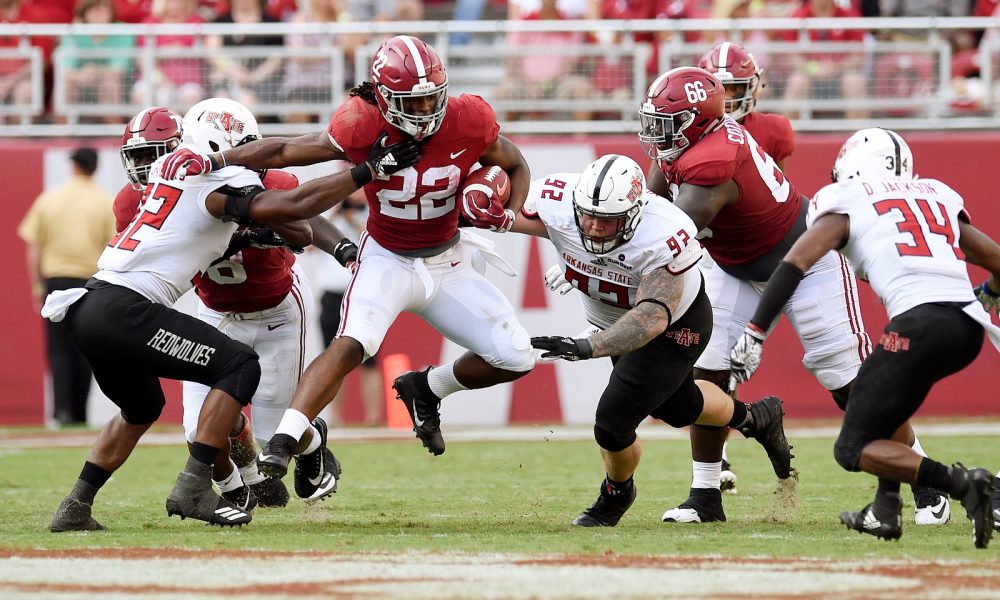 People think Alabama lost too much to the NFL at running back, but if you don’t know the ten that remain, you need to learn all about them. They’re loaded!

This could easily be the most controversial article in the series of embarrassment of riches at Alabama. Many think the running back position is a pool of talent a little on the shallow side once you get past returning star Najee Harris and Brian Robinson. After all, Bama just lost two running backs to this year’s NFL draft and many would say they were the top two, so Alabama has to take a step back don’t they?

Some think it will be like 2015 when Derrick Henry was the big work horse and it wasn’t so much run by committee. They think Najee will carry the load with Robinson stepping in for a change of pace or a break.

But we here at Touchdown Alabama Magazine know better and we intend on convincing you that instead of a step back year, it’s simply another year of outstanding running backs all getting their opportunities proving it’s an embarrassment of riches once again this year as it was last season. We expect Saban to continue using three or four running backs in rotations with others getting occasional opportunities.

Last season, even with two NFL draft picks ahead of him, it was Najee Harris who led the team in yards per carry. So yes, they’re losing two great ones, but may not be losing the very best one. Harris is going to set opposing teams on fire this season, but you already know that, so we’ll move on.

Brian Robinson finished fourth on the team last season, usually in mop up duty to run the clock out. This means that his 4.32 yards a carry looked good, not great because everyone knew he was there to run the clock out and run so he was keyed on. In situations where he gets his chances to run on a play action, first down play, he’ll have much higher numbers. Overall, we look for Robinson to have a, sorry to put it this way, run away season.

But these are the two you know about and there’s really no one else there with a lot of experience, so how can this article be titled an embarrassment of riches.

Tssk, tssk, tssk, you forget, this is Alabama, where it seems every year a freshman phenom comes in and shocks the world with their talent. Najee did it as a freshman and so did a long list of others. And this is a Nick Saban team, you know, the guy who pulls in top recruits better than anyone. So why is it hard to believe that he’ll pull another running back or two out of his hat?

One name you ought to get used to is Trey Sanders. Many thought he’d be the number one player overall in this year’s recruiting class, but he only wound up being the number one running back in the nation and number six overall and you can see why in these videos.

Folks, this is a star that will shine. Even as a freshman, he’s got the 6’0” 217 pound frame that can muscle yardage in the trenches and the quickness to break ankles in the open field. It going to be really hard to keep this young man on the bench this season and now you see that they aren’t worried if one of the starters gets a little banged up or needs a breather. You won’t be losing much if anything with him in the lineup.

It also wouldn’t be unlikely for him to make a grab for the number two running spot come mid season. Yes, he’s that good.

Another name you’ll get to know as the season goes on is Keilan Robinson. He had his knee scoped out and may not be at his best till August, so depending on others on the team perform, his might be red shirted this year. If not you’ll see him take on the fourth spot. He’ll get some runs and maybe a screen pass or two because of his really shifty moves in the open field. Look at these videos and you’ll see he’s also not afraid of and very skilled at blocking and picking up blitzes.

Right now Robinson is the smaller, shifty change of pace back. He’ll need to add 20 or so pounds to be a much better inside runner and pass blocker, but the talent is certainly there.

Another incoming freshman is 6’0” 210 pound Cooper Bishop from Vestavia Hills, Alabama where he ran for 1285 yards and 17 TD’s as a senior. He’s got 4.55 speed and will likely get broken in on special teams where he tackles like a linebacker. It’s likely the Tide red shirts him this season.

There’s also a smaller, lighter slasher kind of freshman, A.J. Gates from Mountain Brook, Alabama. At just 5’7” and 170 pounds and with a 4.42 40 yard dash, if he gets through a crack he’s gone. He is electric as you can see in these videos from Hudl. He accounted for well over 1000 yards of offense and 11 touchdowns. He came to Alabama as a preferred walk on turning down full rides at other schools.

But wait a minute. Didn’t Saban have other top classes? Of course he did and Jerome Ford, a (5’11” 206 pounder who is a red shirt freshman this year is ready for his time to shine and is picked by this author to be the real surprise running back in this group.

He was the nation’s number six all purpose back coming out of high school and played in just the mandatory four games last season to preserve his red shirt status, so he’s not without experience from that and the scout team. He is a very capable back up indeed and might start on a lot of other teams, so this is the point where you really can start talking about an embarrassment of riches at this point, especially after seeing these video clips.

But to sound like a late night infomercial, but wait, there’s more!

De’Marquise Lockridge is here for one last shot at football as a walk on graduate transfer and even I’ll admit, he’s a totally unknown commodity. Except for knowing he’s 5’11’ and about 218 pounds, there’s not much experience for a guy who’s been around as long as he has. We just don’t know what he has to offer but it will be fun to unwrap him and see what he can do.

Lockridge ran for over 800 yards as a senior in high school averaging 8.5 yards a carry at Lawrence County High School in Tennessee, but I’ll be darned if that isn’t all I know. He’s either going to be a real unknown or a real sneak in success. See these videos and see what you think.

And there’s also Jahi Brown, 6’0″, 223 pound junior and a hometown boy from Hillcrest High in Tuscaloosa. He’s a gifted pass catcher as well as a running back as you can see in these videos. He knows the system and can has the power to pick up opposing rushers. He runs hard and can run over folks for short yardage situations.  It will be interesting to see him in mop up play this season.

Lastly there’s Chadarius Townsend, at 6’0” and nudging the scales at near 200 pounds, Saban experimented with this receiver at the running back spot and during the A Day Game, he looked like it was an experiment that could stick. And why not?

In high school he was a quarterback and one of the top recruits in the state. As a senior he accounted for more than 2,700 yards of offense and 35 touchdowns, 13 of those TD’s was when he was passing for 1245 yards and the other 22 touchdowns came from his running ability while he was rushing for 1,481 yards. Look at these videos and you’ll see why Saban let him work out the running backs.

Now if you have a guy like this on bench at maybe in the 10th string spot, I’d say that anyone who doesn’t think there’s an embarrassment of riches at running back doesn’t know how to rate talent.

If you like this kind of in depth breakdown of position players and analysis, you’ll like these articles if you missed them: