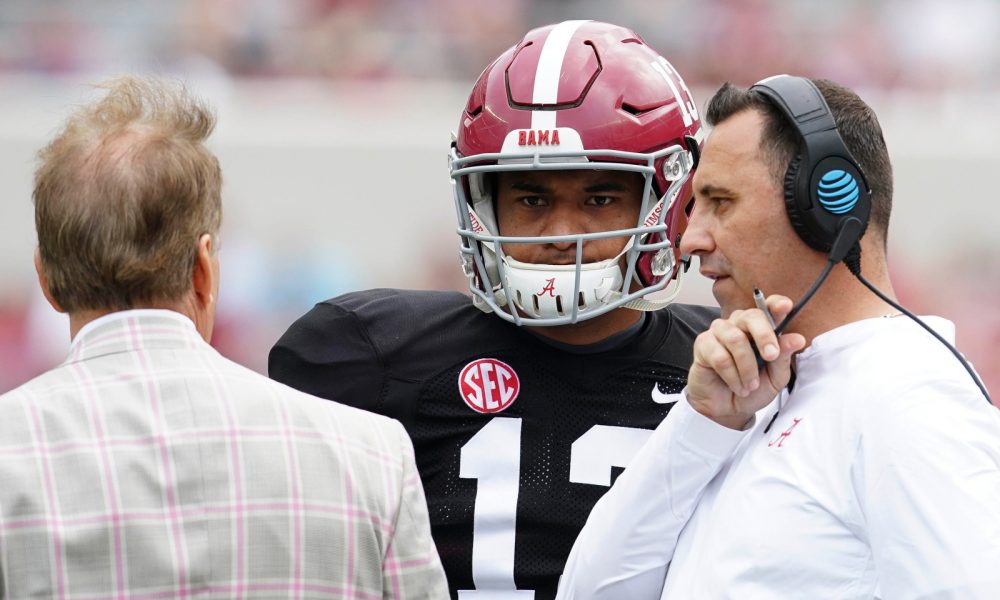 After producing the best statistics of the Nick Saban era in 2018, is it even possible for Alabama’s offense to be more lethal this season?

Tua Tagovailoa is about to take a bet on himself and the coach who spent much time recruiting him will be by his side. A returning junior, the native Hawaiian is regarded by Alabama fans, college football fans and media pundits as one of the sports’ most gifted passers.

Trent Dilfer saw it at the Elite 11 and Saban has witnessed it in two years.

He followed up his “2nd and 26” performance from the 2018 College Football Playoff National Championship Game (2017 season) with a record-setting sophomore year.

Tagovailoa was a Heisman finalist and a consensus All-American, but like all first-year starting quarterbacks, elite defenses gave him fits late in the season. Four of his six interception came versus Georgia (Southeastern Conference title game) and Clemson (CFP national title game).

While he commanded the No. 3 scoring offense (45.6 ppg), No. 6 total offense (522 ypg) and top-ranked pass efficiency offense (197.34) in the nation, offensive coordinator Steve Sarkisian still seems something Tagovailoa can improve on.

As the one that got Tagovailoa fully committed to signing with the Tide for the 2017 recruiting class, prior to leaving for the Atlanta Falcons (NFL), Sarkisian told reporters during the media portion of the Open Practice/Fan Day “the more you do well, the harder you are to defend.”

As great as Tagovailoa is with anticipating throws, there were times where he guessed and did not see the entire field.

In evaluating both quarterback and offensive talent, Sark wants to increase the pressure on defense by having Tagovailoa execute full progression reads.

“We are trying to add to an offense that was very prolific a year ago and how can we be more prolific and stay ahead of defense,” Sarkisian said.

When it comes to Tagovailoa keeping his foot on the neck of defensive minds, Sarkisian said he’s bought into the idea.

Sarkisian would recap a fond memory of Tagovailoa as a high school sophomore, whipping the football against the wind in Hawaii.

The inquisitive coach admired his accuracy for a long time, but after watching him through two years of college, he has seen Tagovailoa’s instincts grow.

“He has a natural feel for passing the football and the passing game,” Sarkisian continued on Tagovailoa. “Just on that note, those two things really stood out to me. His ability to stay accurate regardless of the elements, his quick release and then the instincts that he plays the position with.”

Tagovailoa is not trying to have the pain from losing the CFP title game happen again, and one of his trusted receivers is seeing the leadership role he has taken. In speaking with Henry Ruggs over the weekend, the junior said the elite trigger man “does not allow anyone to settle.”

“He is always calling us and he makes sure we come in to do extra work and get our timing down,” Ruggs said of Tagovailoa. “He never lets us get complacent.”

He is keeping the receivers hungry and Sarkisian is keeping him hungry.

Tagovailoa is ready to finish the job with a championship this season.