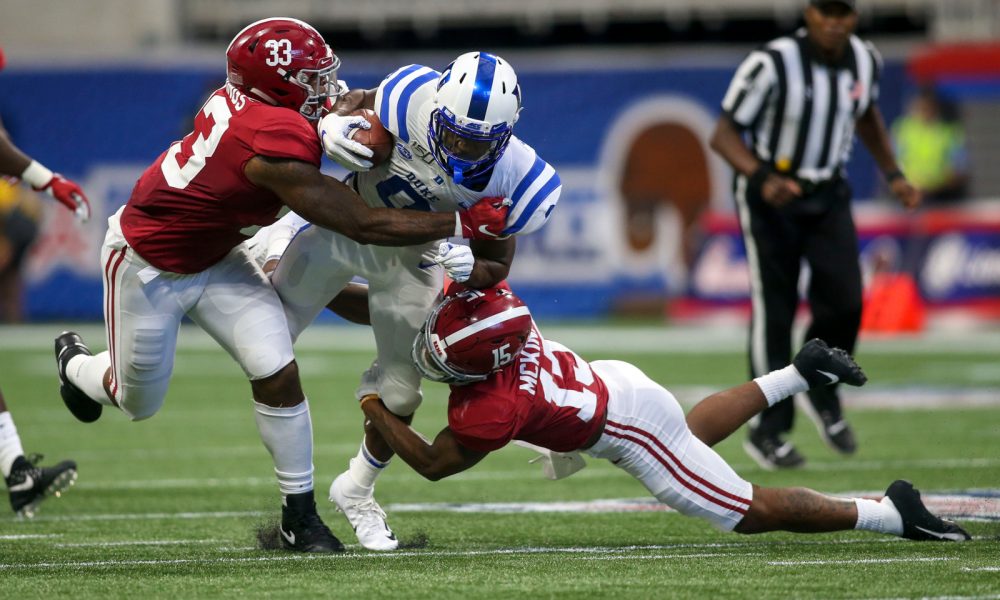 It has a lot of players on offense who are ready for the next level, but Alabama is just as potent defensively as well. The Crimson Tide earned a 42-3 win over Duke and its defense held the Blue Devils to 204 yards offensively – including 97 passing yards from Quentin Harris.

Alabama forced three turnovers and David Cutcliffe’s bunch converted first downs on three of 12 third down attempts. Nick Saban has a few players that are high on NFL Draft boards for 2020; however, for those that want to see the projections of yours truly, go to tdalabamamag.com for the full list of draft-eligible Tide players.

After updating the offensive guys, we now look at the candidates on defense from week one.

Analysis: He is already off to a better start.

Raekwon Davis showed big leadership in his play versus Duke, finishing with six total tackles (tied for second on the team).

He registered one solo stop and captained a defensive line that made it very difficult for the Blue Devils to run the football.

Also, Davis made Harris uncomfortable in the pocket – seeing how he threw two interceptions and completed 12 of 22 pass attempts.

The 6-foot-7, 312-pound defensive end played with speed and leverage.

He is a top-20 pick (No. 20 overall) on my board, but will rise quickly with continued performances like the one from last week. Coach Saban stated in a presser prior to the matchup with Duke that if Davis continues to play with strong effort, provide leadership and trust his knowledge of the system, he should have a really great year. Week one showed the traits.

His size would have him primarily at defensive tackle in the National Football League; nevertheless, Davis can play either nose guard or defensive end.

Analysis: LaBryan Ray has grown to be at the exact same playing weight as former Tide standout, Jonathan Allen at 292 pounds. A native of Madison, Ala., the former five-star in Alabama’s 2017 class posted five tackles versus Duke – including half a tackle for loss.

He has gotten much better with his technique and according to him, he told reporters it was the success Quinnen Williams (now with New York Jets) had last season that helped him the most.

The Birmingham (Ala.) native collected 19.5 tackles for loss, eight sacks and 12 quarterback pressures, en route to being the No. 3 overall pick back in April. Ray sees these same traits in true freshman, DJ Dale and it’s pushing him to make this his best year on the defensive front.

While his value projects in between the second and third round, Ray sits as a second-round player for now.

Analysis: He has a chance to return to school – seeing how he’s a redshirt sophomore – but Phidarian Mathis had a solid performance versus Duke.

Hailing from Monroe, La., he carries the same weight as Raekwon Davis at 312 pounds.

The 6-foot-4 defensive lineman totaled five stops with three solo tackles against the Blue Devils and provided energy off the bench.

With him not being a starter, Mathis would be a middle to late third-round selection – if he chose to declare after this season.

Of course, it depends on his production from week to week.

We’ll see how he performs against New Mexico State.

Analysis: He is fully healthy from a serious leg injury he suffered versus Clemson in the 2017 College Football Playoff semifinal, and it shows.

Anfernee Jennings had a bounce back year for Alabama in 2018, totaling 50 tackles – including 13 for loss and 5.5 sacks. He was awarded Comeback Athlete of the Year at the Crimson Choice Awards and is looking for more.

The 6-foot-3, 259-pound senior was one of two veterans (Raekwon Davis) tied for second on the team versus Duke with six tackles last week.

With him setting the edge at strong-side “SAM” linebacker, the Blue Devils averaged just 3.8 yards per play.

Jennings can line up as a rush linebacker (EDGE) or he can walk down an become a defensive end.

He projects as a late first-round value, but consistent production has a chance of moving him into the top-10 range.