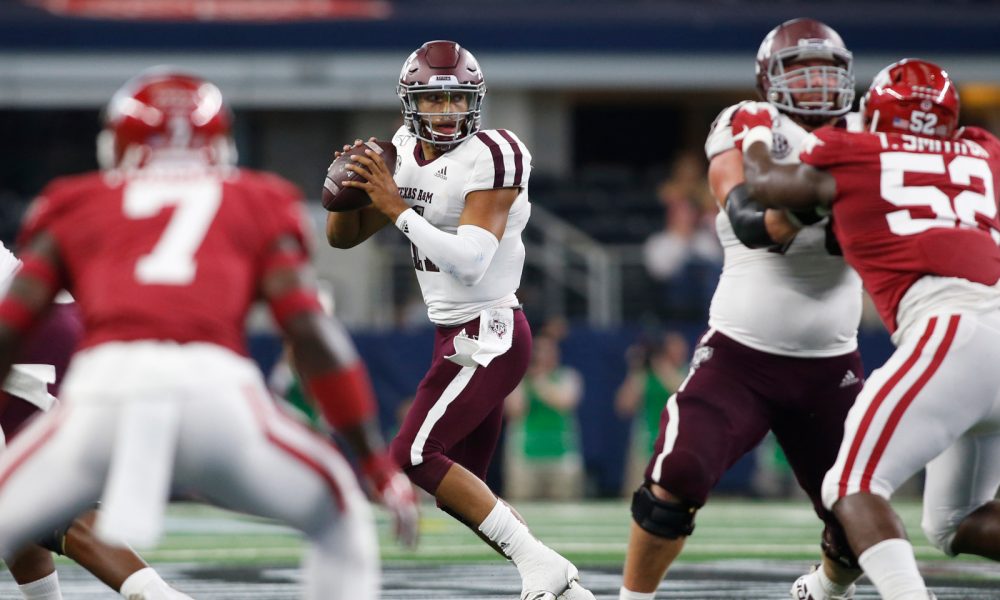 He knows all too well about this topic and he’s competed against Kellen Mond for a while.

Even in victories for Alabama, dual-threat quarterbacks have a way of making Nick Saban snatch his hair and destroy headsets more than usual.

An ability for someone to escape the pocket and create a huge play downfield just aggravates the mess out of the 67-year-old.

His formula of recruiting on defense changed after facing players such as Tim Tebow, Cam Newton and Johnny Manziel, due to their speed, playmaking abilities and the tempo used by their offenses to offset the Crimson Tide on defense.

Regardless of him not being successful against Alabama, Texas A&M has this same athlete in Kellen Mond.

A former five-star via San Antonio, Texas, Mond has completed 35 of 62 passes in two games versus the Tide with 433 passing yards. Although he accounts for more turnovers than scoring tosses (three to two), the junior has been dangerous with his legs. He’s totaled 112 yards rushing with two touchdowns – including an output of 98 yards with a score on 18 carries last season.

The task that faces Alabama’s group at linebacker and along the defensive front is not only collapsing the pocket, but also negating any chance for Mond to break containment.

Tua Tagovailoa has prepared the unit for what will be expected in the third meeting against Mond and the Aggies.

The native Hawaiian and Mond were in the same recruiting cycle and despite them not having a close relationship, the Heisman leader knows how good Mond is.

“Kellen Mond can do a lot,” Tagovailoa said. “He can throw the obviously, but he’s just as dangerous with his feet. That kid is fast.”

One quarterback that will never leave Saban’s mind is Manziel.

The 2012 Heisman winner gave him fits, as he defeated Alabama at Bryant-Denny Stadium and put the six-time national champion through a shootout in 2013 inside Kyle Field.

In defending a true dual threat quarterback, the art of the chess game when it wants to pass versus pulling the ball down and running.

According to Tagovailoa, it puts a defensive coordinator and his scheme in a very undesirable position.

As much as he wants to go fast, Tagovailoa knows the importance of having a fresh defense late in games.

“We don’t have that much depth to sustain and play, so as an offense, we gotta to go out there and sustain drives to keep our defense off the field and give them some rest,” he said.

Steve Sarkisian is the offensive coordinator, but Saban does make suggestions when he feels the team should do something to control the pace of a game. Whether it’s fast or slow, Tagovailoa said Saban is a fan of drives that span at least eight plays.

When it comes to making quarterbacks uncomfortable, he said constantly generating pressure is the main thing.

“You have to have a lot of movement on defense,” Tagovailoa said. “When a lot of things are coming at you, it can be hard to see. So, movement would make a quarterback uncomfortable.”

From one SEC guy talking about another, hopefully the Tide’s defense took note of what its trigger man said.

Mond is elusive, but is about to face a team that will lay down the law.

Where do Alabama commits play this week?
Just how important will communication be for Alabama this weekend?
To Top
%d bloggers like this: