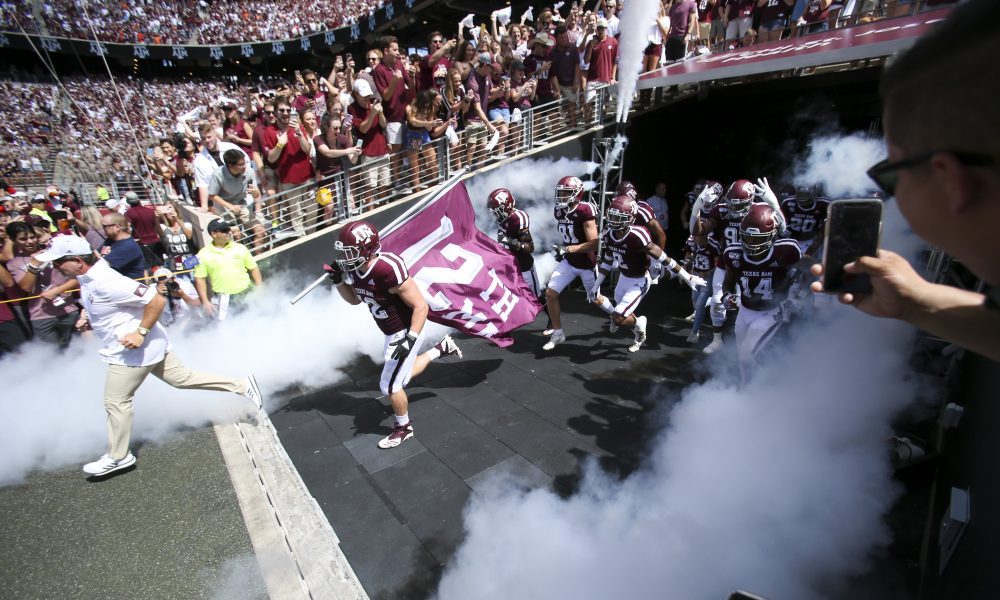 One of the keys to running a successful offense or defense is the ability to communicate. Whether it’s through hand signals, code words or images for any play or stunt to work everyone needs to be on the same page. At home Alabama has seemed to not have a big problem in relaying a single message throughout the team. But their road trips, particularly the game against South Carolina was a bit of a different story due to the crowd noise and tempo. And this weekend, Texas A&M hopes to use its home field to its advantage.

Kyle Field holds approximately 102,733 people who will all be doing their part in trying to deafen the visiting Crimson Tide especially on the defensive side of the ball. It’s now well known that the heart of Nick Saban’s defense has an extreme lack of experience. The two freshman Christian Harris and Shane Lee who’ve both been tossed into the fire have both had a bit of a roller coaster of a season so far.

Saban and defensive coordinator/linebackers coach Pete Golding both continue to work to try and build up Harris and Lee as much as they can.

“We’ve done extra meetings to try to increase their knowledge and ability to go out and feel confident in terms of what they’re supposed to do,” said Saban. “But there’s nothing you can do to teach experience. The only way to get that is to go do it.”

During Alabama’s practice on Wednesday, Saban had crowd noise blasting on the outside speakers for the entire campus to hear in an attempt to replicate a game’s atmosphere. The team also did a ton of work during the bye week to educate the players on what they are about to face not only this weekend, but in the following games too.

But just like Saban said, you cannot teach experience which means the Alabama defense will need to rely on players like Xavier McKinney, Jared Mayden and Anfernee Jennings to help the youth of the front seven.

Mayden in particular has taken it upon himself to try and become more of a vocal prescience on the field especially while playing next to another freshman in safety Jordan Battle.

In an environment like Texas A&M’s it’s important that the more experienced players take up a bit more of a watchdog mentality to help the freshmen. But it won’t just be the defense who will have struggles with communication. The offense will need to be just as or even more locked in on the play calls and audibles.

Penalties have been a bit of an issue for the team this season, especially on the road. In the Chick fil-a Kickoff against Duke Alabama was called for eight penalties and going back once again to the game at South Carolina the team was called for 11. Against the Gamecocks, three of the eleven penalties were false starts on the offense with two getting called on the same drive.

Although the track record of penalties on the road hasn’t been stellar, offensive coordinator Steve Sarkisian and quarterback Tua Tagovailoa will likely go through the entire list of cadence variations.

“We can start out with the clap but then we also have a mix up of cadences as well,” said Tagovailoa. “If it does get too loud. Which it probably will. Then we’ll end up adjusting accordingly.”

When dealing with various snap counts on the road a quarterback would prefer his starting center be on the field as well. Unfortunately for Tagovailoa that may not be the case as junior Chris Owens its “very questionable” per Nick Saban. This leaves the duty to Florida State transfer Landon Dickerson who has one game of experience at center with Tagovailoa.

Despite all the difficulties Kyle Field presents to this year’s Alabama squad, the team’s recent history of traveling to College Station has been quite good. In the Saban era, the Crimson Tide are undefeated when on the road at Texas A&M and are 6-1 dating back to 2012. In that time Saban has probably figured out a decent way to adjust to the environment.

Alabama QB Tua Tagovailoa on the challenge of defending Kellen Mond
Can Jimbo Fisher out coach Nick Saban and pull out a huge upset?
To Top
%d bloggers like this: