Nick Saban may have to revert to “old school” Alabama versus Arkansas"> Why Mac Jones and "old school" Alabama works against Arkansas?
Alabama SEC 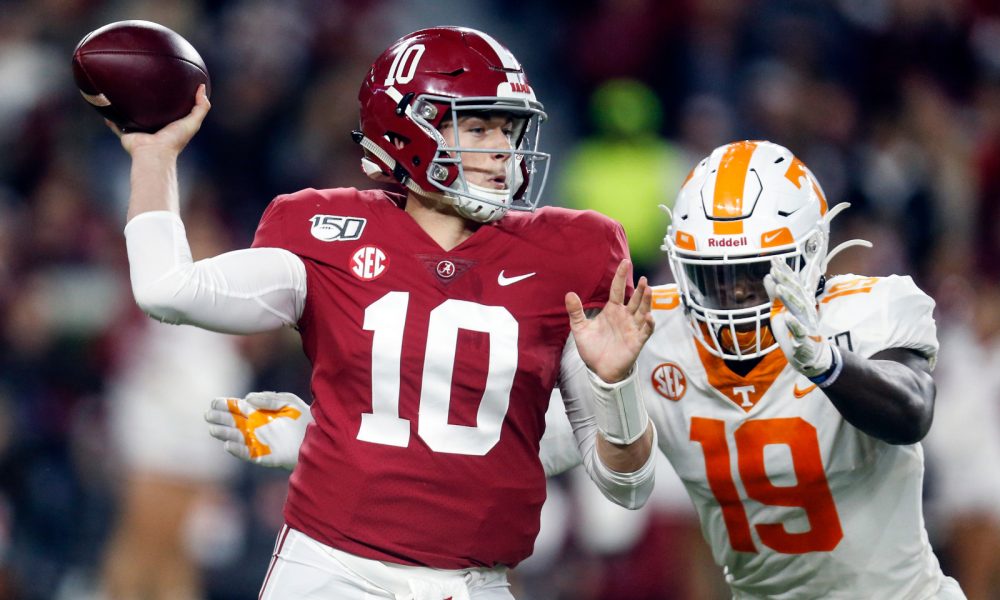 Alabama fans took a collective sigh of relief on Sunday morning, as the injury to Tua Tagovailoa was not as bad as what was initially thought.

According to Nick Saban, the junior quarterback sustained a ‘twisted ankle’ versus Tennessee and will miss one to two weeks of action.

Upon having an MRI done, the Crimson Tide’s medical staff suggested he have a tightrope surgery performed on his ankle.

Tagovailoa took the precautionary step and per a release from Saban, the recovery process takes two to three weeks. The native Hawaiian told his teammates, following the game, that he’ll be back for LSU at Bryant-Denny Stadium on Nov. 9.

During his absence in the second half against the Volunteers, Alabama found itself reverting to its old school ways to claim victory. Its offensive line assisted Najee Harris to his third 100-yard performance of the season and create opportunities for Brian Robinson to have success as well.

For the first time in two years, Saban’s aspect of controlling a game may come to fruition with Arkansas coming in to town. The Razorbacks are coming off an embarrassing 51-10 loss to Auburn and Hog fans are growing impatient. Chad Morris is looking like he is not the answer at head coach and getting Nick Starkel from the NCAA transfer portal has not been a good investment.

Now at 2-5 and winless (0-4) in conference play, Arkansas carries little motivation – if any – versus the Tide.